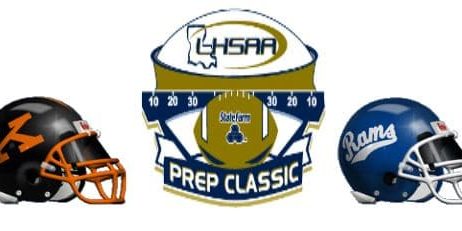 Well, here we are. We have reached the final destination when it comes to the Road to the Dome. Over 30 teams had one goal in mind and  that goal is to be one of nine teams in the end holding a state championship trophy in the Mercedes-Benz Superdome with the Queen smash hit “We Are the Champions” playing in the background. Now, 30 teams’ seasons are over and there are only now only two teams standing. Both teams had a long journey to get to this point, but now, only one team will get the taste of sweet victory while the other team will suffer the agony of defeat. The Louisiana high school football stage does not get any brighter than this. A weekend filled with great championship matchups kicks off this Thursday at noon in the legendary Superdome with the Class 1A state championship game. In this game, the West St. John Rams will face the Kentwood Kangaroos. Now, both of these Class 1A powerhouse football programs have what it takes to add another state championship trophy to their display, but which of the two teams will be able to get the win in the end? Well, Louisiana Football Magazine’s expert Lee Brecheen has seen all of these teams play and gives his insight on which team will win the Class 1A state championship. This week, we will get you all covered in what you need to know for the Class 1A state championship game.

West St. John’s Road to the Dome: Bye in first round; 44-2 win over East Iberville in second round; 26-6 win over Jonesboro-Hodge in quarterfinals; 34-18 win over Logansport in semi-finals

West St. John Team Preview: The West St. John Rams are pretty much the favorite to win the 1A state championship this year. Led by Head Coach Brandon Walters, the Rams won the District 8-1A championship with a 11-2 overall record and undefeated record in District play. The team’s only losses came against teams that play in higher classifications such as St. James and Plaquemine. Still, they gave everything that the Wildcats and the Green Devils could handle. The Rams don’t have a lot of weaknesses. For starters, they have a dynamic quarterback in D’andre Gaudia, who has thrown for 2,200 yards and 23 touchdowns. Gaudia has some really good weapons on the outside to throw to in WR Aason Moll, who is a big 6-4 target that can catch jump balls, WR Alyjah Borne, ATH Wantrell Williams, who can line up at multiple positions, and WR Trenton Grow, who is only a sophomore, but has already been looked at by Texas A&M. What makes the Rams so good on the offensive side of the football is that the Rams can throw the football, but they can go on long extending drives relying on their big offensive line and their one-two punch at running back with Kylon Duhe and Niko Roy. Both runners have combined for almost 2,000 yards and over 40 touchdowns. Defensively, they have been really good on that side of the football as well with guys such as LB/DE Covan Barnes, DT Horace Lewis, DE Kyree Thorne, DE Jonathan Porter, LB Zyran Wilson, and LB Kelon Gardner just to name a few. There really is not a glaring weakness on this West St. John team especially in 1A. This is a very deep football team that has a lot of talent on both sides of the football. The only thing that has been holding the Rams back would be themselves. In their last game against the defending state champions in the Logansport Tigers, the Rams turned the ball over twice before halftime when it should have been a 21-0 halftime lead into a 21-12 lead. However, the Rams were able to dominate in the second half to pull away from the Tigers 34-18 to advance to the Superdome. This will be the Rams’ ninth state championship appearance and first since 2011 when Robert Valdez was the head coach. The Rams are trying to win their fourth state championship in school history.

Kentwood Team Preview: The Kentwood Kangaroos, under Jonathan Foster, won arguably the toughest district in all of 1A with such other teams like Southern Lab and Ascension Catholic also in that district with a 12-1 overall record. In fact, the Kangaroos’ only loss came against the Loranger Wolves early in the season. The Kangaroos have now won 13 straight games in the regular season and once again, will be a state championship contender due to the many skill guys that the offense has. The Kangaroos are one of the best skill talent teams in all of 1A. The Kangaroos are led by their dual threat quarterback Larenz Morris. Morris has plenty of options to throw the football as Kentwood is always strong at the skill positions and there is no exception this year. With skill guys such as WR Jamarquea Diamond, WR Edward Magee, WR Devion Hookfin, and finally WR Trey Palmer, who has already received an offer from LSU as a junior. The most underrated aspect of this team is their running game. A lot of teams may think that Kentwood is a spread team that can’t run the football, but this team can run the football with the best of them. The Kangaroos have one of the most underrated running backs in the state in Larry Carter. Carter is somebody that has been praised by Coach Foster for how much of an impact he has made as part of the Kangaroo offense. In the trenches, both lines may not match up with West St. John across the board, but the team does have some size in  6-6, 250 pound OT Eric Dunn, 6-0, 250-pound OG/DT Justin Ulschak and 6-3, 260 pound DL Kendall Wilkerson. The Kangaroos know what it takes to knock out some of the best 1A programs around as they defeated such teams as Ascension Catholic and Southern Lab as well as powerhouse programs Haynesville and Oak Grove in the last two games. The Kangaroos are really well coached and have the speed as well as the size to compete with the Rams and maybe even win. The Kangaroos will be playing in their 15th state championship game and will be chasing their ninth state championship in the program’s storied football history.

Lee’s Pick: “I am going to go with West St. John to win this football game just because I think that they are the most talented team on the 1A public side of the bracket. Kentwood is pretty good. Trey Palmer is getting a lot of attention, but West St. John probably has ten players that could go D-I in the end whether if they are seniors, juniors, or even sophomores. I will actually be shocked if Kentwood wins the game because West St. John has the speed to cover Kentwood’s skill players.”

Jace’s Pick: “I have seen both teams play and both teams do deserve to play at this point. They are arguably the two best teams in this bracket and this was the championship game matchup that I picked before the playoff games even started. I think it will be a great game that will feature a lot of great athletes, but I think it comes to the line play. In the end, I think Duhe and Davis along with their offensive line will execute some big second half drives. The interior line play will be the biggest factor in this game as I think skill position wise both teams are pretty even. It should be a great game, but I think West St. John is the more complete team and they will get the win in the end.”