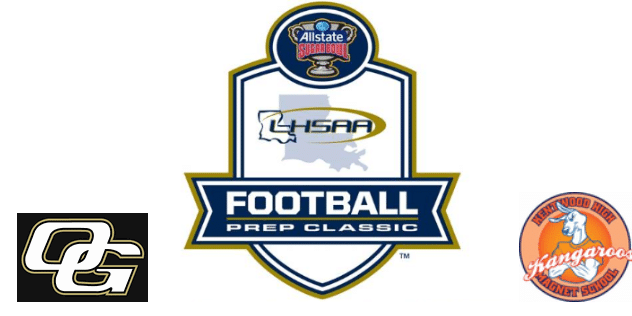 Well, here we are. We have reached the final destination when it comes to the Road to the Dome. 27 teams had one goal in mind and  that goal is to be one of nine teams in the end holding a state championship trophy in the Mercedes-Benz Superdome with the Queen smash hit “We Are the Champions” playing in the background. Now, 25 teams’ seasons are over and there are only now only two teams standing. Both teams had a long journey to get to this point, but now, only one team will get the taste of sweet victory while the other team will suffer the agony of defeat. The Louisiana high school football stage does not get any brighter than this. A weekend filled with great championship matchups kicks off this Thursday at noon in the legendary Superdome with the Class 1A state championship game. In this game, the Oak Grove Tigers will face the Kentwood Kangaroos. Now, both of these Class 1A powerhouse football programs have what it takes to add another state championship trophy to their display, but which of the two teams will be able to get the win in the end? Well, Louisiana Football Magazine’s expert Lee Brecheen has seen all of these teams play and gives his insight on which team will win the Class 1A state championship. Also, Louisiana Football Magazine staff members Jace LeJeune and Cameron Cerniglia give their insight and predictions on the first title game of the championship game week. This week, we will get you all covered in what you need to know for the Class 1A state championship game.

Oak Grove’s Road to the Dome: Bye in first round; 44-0 win over Slaughter Community Charter in second round; 14-8 win over Oberlin in quarterfinals; 30-0 win over West St. John in semifinals

Kentwood’s Road to the Dome: Bye in first round; 34-6 win over Merryville in second round; 44-14 win over Basile in quarterfinals; 20-14 win over Haynesville in semifinals

Jace’s Game Preview: Both the Oak Grove Tigers and the Kentwood Kangaroos opened a lot of eyes in both their semifinal matchups. After struggling in a 14-8 quarterfinal win over Oberlin, the Oak Grove Tigers dominated the defending Class 1A State champions West St. John Rams 30-0 in the semifinals. The story of the game was the dominance of the Oak Grove defense led by the front of Wendell Brown, Kenean Caldwell, Bert Hele, David Bruce, and Patrick Hagan only holding the Rams to 100 yards of total offense. Also, the rushing game had its field day against the Rams’ defensive front gaining 260 yards on the ground including 130 yards and two touchdowns from senior Wyatt Rawls. The Kentwood Kangaroos may have not dominated their opponent, but what was most impressive about their win was that the team traveled to play Haynesville, which is not easy to do, and they came back to win the football game scoring 20 unanswered points after it first looked like it was going to be a blowout by Haynesville, which jumped up to a 14-0 lead. What a way to start off the state championship week featuring two of Class 1A’s finest. This is the first Dome appearance for the Tigers in over 14 years, but will be looking for the team’s fifth state championship. The Kangaroos are back in the Dome for the second year in a row and will be looking for its ninth state championship. It will be an intriguing matchup between a team that likes to ground and pound in Oak Grove versus a team that likes to throw the ball with great skill position players in Kentwood. However, Kentwood has shown without LSU commit Trey Palmer that they can beat teams like Oak Grove in the playoffs. This should be a great game featuring teams of contrasting styles.

Cameron’s Game Preview: Both of these teams have been able to win different types of games during the playoffs.  They both were able to win close games and they were able to win comfortably in games as well. Kentwood edged Haynesville in the semifinal round 20-14 and Oak Grove defeated West St. John 30-0.  It will be fun to see if Kentwood can slow down the rushing attack of Oak Grove and it Oak Grove can stop the air attack of Kentwood.

Lee’s Game Preview: “I think Kentwood surprised me getting to the Dome because they had a couple of guys hurt, but I was able to watch both teams play. I think Oak Grove is probably the biggest sleeper team in the state. They are big on the offensive and defensive line. They are probably the best defensive line in the state regardless of classification. Oak Grove also has a lot of skill talent, which they usually don’t have. I think they can go head and toe with Kentwood so I am going to go with Oak Grove.”