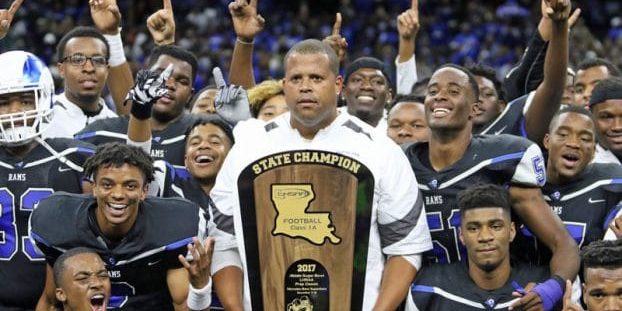 What a great weekend it was for Louisiana high school football fans! Over three days, 18 of the state’s best teams battled it out for the title of being state champions. These teams worked all spring, summer, and fall for a chance for this moment. In the end, nine teams came out as state champions. It was a long journey to the Dome and it was one full of exciting moments as well as ups and downs, but these state championship teams finished the long winding journey on top. Now, the teams come home with a state championship trophy. No matter if these players go on to play collegiate football or if they end their careers at the high school level, these players will not forget what it meant for their team to hold up a state championship trophy. For the teams that lost this weekend, there is nothing to hang their heads about. They got to a point in which a lot of other teams would have dreamed about reaching. Over the course of the week, we will recap each and every game that went down over the weekend. There is still a lot going on in the football world as bowl games will be fixing to start, the NFL regular season is about to come to an end, and there is still a lot of All-Star games that will be going on at the high school level, but we will have to wait until next season to see Friday night football once again. As we wrap up the 2017 Louisiana High School Football season, we will give our analysis of all that went on during the weekend. Today, we will talk about the first game of the LHSAA Prep Classic which was the Class 1A State championship game between West St. John and Kentwood.

Recap: The Class 1A state championship game featured two of the best Class 1A powerhouse programs in West St. John and Kentwood. This is West St. John’s ninth state championship appearance, but the team’s first since 2011. However, it has been a long dry spell for the Rams as it has been since 2004 when the Rams last won a state championship game. For the Kentwood Kangaroos, the team has made much more recent trips to the Superdome including a Class 1A state championship win in 2015. The Kangaroos entered the game trying to win their second state championship game in three years as well as the team’s ninth state championship overall in the program’s storied history. Something had to give when both these teams played. The West St. John defense set the tone for the entire game as star two way player Niko Davis intercepted a LaRenz Morris pass to set the Rams in good field position. What followed was a three yard touchdown run from their junior RB Kylan Duhe to put the Rams up first with a 7-0 lead. The Kangaroos would bounce back from the interception as the drove down the field to tie the football game with a touchdown pass from Morris to Radarrian Robbins. The score remained that way until the West St. John defense stepped up again with another interception. However, this time, it was returned for a 46 yard touchdown by senior OLB/DE Covan Barnes. The extra point was no good and at the end of the first half, the score was 13-7 West St. John. After a nice four minute drive, the West St. John offense capitalized and ended their drive with another Duhe touchdown run to extend the Ram lead to 13 at 20-7. The Kangaroo offense shortened the West St. John lead with a 16 yard touchdown pass from Morris to Trey Palmer to make it 20-14. Even though Palmer, who was already offered by the LSU Tigers, had the receiving touchdown, the West St. John defense did a great job of containing the star junior as this was his only catch of the football game. After the touchdown by Kentwood with about five minutes left to go in the third quarter, it seemed that the Kangaroos had the offensive weapons to either tie the game or take the lead, but the West St. John showed how tough their defense is the rest of the way. Kentwood had the ball four more times, but the first two possessions would end in a three and out. On the third possession, the Kangaroos were on a very good drive and it sure looked like they were going to take the lead, but Morris would throw his third interception of the game. This time, it was intercepted by star sophomore recruit WR/DB Trenton Grow, who had a very impressive one handed catch earlier in the game. Still, the West St. John offense was not able to put the game out of reach as the Kentwood defense did a good job on their end to continue to give their offense the ball back. Even with all the turnovers and mistakes the Kangaroos have made in the football game, they had one more shot taking the ball over at the 47 yard line and with a minute and 20 seconds left to play. It seemed that the Kangaroos had a big play when Morris was able to connect with Palmer for a big play that would have put the Kangaroos at the 11 yard line, but another crucial mistake occurred when Kentwood had an ineligible man down the field. Then, on the following play, Morris was picked off for a fourth time by sophomore defensive back D’Kyri Jackson to seal the 20-14 victory for the Rams. The West St. John Rams, led by their head coach Brandon Walters, helped to win the program’s fourth state championship victory in program history. The win was also sweet for Coach Walters as this would be his first state championship win at West St. John whether as a head coach or as an assistant coach. For Kentwood Head Coach Jonathan Foster and the Kangaroos, the team fell short of the team’s ninth state championship win, but it still has been a great season that included winning 13 games, winning their district, and making the state championship game. However, it was the four turnovers and the 18 penalties that played a big part in the loss for the Kangaroos even though the total yardage was even for both teams with Kentwood actually outgaining West St. John 254 yards to 224 yards.

Play of the Game: There could be a lot of big time plays that could have been the play of the game including the game winning interception by Jackson to seal the game or the one handed catch by Grow, but in my opinion, it was the pick six by Barnes. If there was one interception that Kentwood would have loved to get back, it was this one. First of all, it was a simple screen pass, but Barnes red the play beautifully. Morris tried to complete the pass throwing the ball across his body. All of these factors played a huge part in the interception. Then, Barnes was able to return the interception for a touchdown. Even with all of the turnovers and penalties, if you take that interception out of play, then who knows how the game would have gone. The score would have been tied at 14. The Kangaroos still could have won the game in overtime.

West St. John Player of the Game: The player of the game went to Kylon Duhe and deservingly so as he carried the Ram offense with 29 carries for 120 yards and two touchdowns. In fact, the passing game only had one completion the entire game. Running the football and playing good defense was the key to success for West St. John. In speaking of the defense, the MVP of the game was the West St. John defense. They were able to shut down a very explosive Kentwood offense and forced four turnovers in the process. They forced Kentwood out of the end zone on their last four possessions to seal the game when the offense was not able to score another touchdown to seal the game. Duhe was really deserving to win the MVP for the offense, but the Rams were able to win the football game thanks to their defense, who had a very dominant effort.

Kentwood Player of the Game: Not a lot of things clicked offensively for the Kangaroo Kangaroos and even though LaRenz Morris turned the ball over four times, he would have to be Kentwood’s player of the game. He also did account for Kentwood’s two only touchdowns of the game as well as 200 total yards. At times, Morris made plays to keep his team in the game and did it without much production from his top target Trey Palmer. It definitely was not the performance Morris was looking for to cap off his high school career, but without him, the Kangaroos may have never been in this position to begin with.