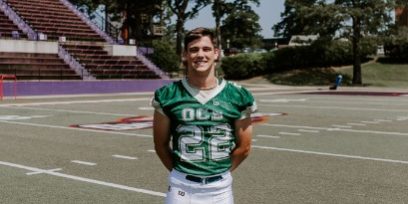 12 teams are down and there are four more teams left to go. All four teams have their own strengths and weaknesses, but they all have one goal in mind. That is to be one of nine teams in the end holding a state championship trophy in the end. For Louisiana football fans, this is the most wonderful time of the year. It is our version of “March Madness”. This year, we got you covered as for the next couple of weeks, we will go through all of the matchups from 1A all the way to 5A public and private each and every week leading up to the All-State Sugar Bowl/LHSAA Prep Classic from December 13th-14th. Louisiana Football Magazine’s recruiting expert Lee Brecheen and editor Jace LeJeune give their picks on which teams will survive and continue their march to the State Championship. Today, we preview the Division IV semifinal matchups.

Game Preview: The Ouachita Christian Eagles and the Metairie Park Country Day Cajuns pulled off upsets in the quarterfinals of the Division IV playoffs. The Eagles played in a classic involving the Calvary Baptist Cavaliers. The Eagles fell behind 33-13 early, but thanks to valiant efforts by quarterback Hunter Herring and all-purpose playmaker Will Fitzhugh, the Eagles were able to overcome the deficit in a 49-47 victory. For the Cajuns, the team was able to get the victory against the number one seed Vermilion Catholic Eagles with a 21-19 victory. The Eagles have become highly explosive on offense scoring over 40 points in each of the team’s eleven victories led by Herring, Fitzhugh, WR Eli Extine, RB Dillon Dougan, and others. While the Eagles have scored a lot offensively, the team also shows that they can execute at all three phases under head coach Steven Fitzhugh, who has 200 victories and five state championships to his credit. The Cajuns have one of the best quarterbacks in the entire state at their side in Tulane commit Justin Ibieta. In his senior season, the 6-5, 215 pound pocket passer has thrown for 1,778 yards and 25 touchdowns while running for 650 yards and eight more touchdowns. Under head coach Joe Chango, the Cajuns are capable of making a lot of plays through the air. Wide receivers C.D. St. Helaire and Tyler Williams have combined for 70 receptions for over 1,000 yards and 20 touchdowns. Even though the Cajuns are capable of putting up points on the board, the team has only scored 51 points in their last two games combined. In order for the Cajuns to try and pull the upset and get to the state championship, they must contend with a team that has put up close to 100 points in the last two games.

Game Preview: The Southern Lab Kittens and the Catholic-Pointe Coupee Hornets also pulled off upsets in the quarterfinals, but this time against familiar opponents. The Southern Lab Kittens defeated former district rival Ascension Catholic Bulldogs by a final score of 26-14. Without the Bulldogs’ star running back Jai Williams, who was being held in the second half, the Kittens were able to control the tempo of the football game and pulled away in an impressive 26-14 performance. Meanwhile, the Catholic-Pointe Coupee Hornets did one of the hardest things a football can do, and that was defeat a good football team twice. After defeating the Opelousas Catholic Vikings in dominant 44-10 fashion, the Hornets stung again by shutting out the Vikings by a final score of 13-0. The Kittens are arguably the most athletic team left in the bracket even with the loss of LSU signees Tyrion Davis Price and Kardell Thomas. Coach Darrell Asberry’s crew includes two DI commits in Arizona linebacker commit Jabar Triplett and Houston wide receiver commit Reginald Johnson. Offensively, the Kittens are arguably more balanced this season than last season with quarterback Angelo Izzard throwing for close to 2,000 yards and 30 touchdowns and the running back duo of Dae’lon Hardy and Lutrell Pruitt combining for over 2,000 yards rushing and 20 touchdowns. Defensively, the Kittens have been hard to move the football against only giving up two offensive touchdowns in its last two games. The Hornets like to run the football with its three headed monster featuring Nick Carriere, Matthew Langlois, who is the program’s all-time leading rusher, and Collin Grezaffi, who has over 1,000 yards and 22 touchdowns. The Kittens seek its first state championship appearance since its last two Division IV state championships were vacated back in 2017, while the Hornets will play in its first semifinal game since 1985.

Win-Loss Records For Division IV Picks (At Conclusion Of Quarterfinals):