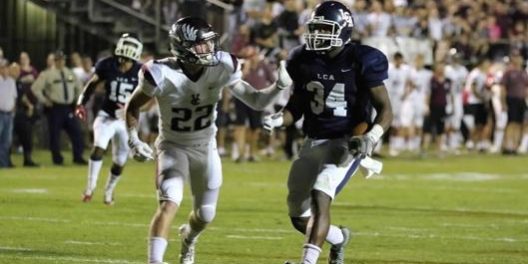 Well, here we are. We have reached the final destination for the private schools when it comes to the Road to State. 11 teams had one goal in mind and that goal is to be one of nine teams in the end holding a state championship trophy. Now, nine teams’ seasons are over and there are only now only two teams standing. Both teams had a long journey to get to this point, but now, only one team will get the taste of sweet victory while the other team will suffer the agony of defeat. The Louisiana high school football stage does not get any brighter than this. In this game, the Lafayette Christian Academy Knights will face off against the St. Charles Catholic Comets for the Division III state championship crown. Both of these teams have shown that they have what it takes to win the state championship, but which of the two teams will be able to get the win in the end? Well, Louisiana Football Magazine’s recruiting guru Lee Brecheen and editor Jace LeJeune give their predictions on will claim the right as state champion.  This week, we will get you all covered in what you need to know for the Division III state championship game.

Lafayette Christian Academy’s Road To State: Bye in first round; 42-7 win over Holy Savior Menard in quarterfinals; 49-14 win over Dunham in the semifinals

St. Charles Catholic’s Road To State: Bye in first round; 40-15 win over Episcopal in quarterfinals; 43-42 (2 OT) win over Catholic-New Iberia in semifinals

Despite moving up from Division IV to Division III, the Knights have not lost a beat as the team is going for its third straight state championship under head coach Trev Faulk. The Knights have been dominant all season, and have looked impressive even in their only loss to Class 5A power Acadiana by a final score of 27-13. The Knights do not have a lot of weaknesses. Offensively, the unit has not missed a beat after the graduation of quarterback Zachary Clement as converted wide receiver and UL commit Errol Rogers has done a great job of leading the offense. Rogers will rely on All-State running back and Northwestern State commit Logan Gabriel in the ground game, while in the passing game, Ethan Laing has stepped up big this season. Defensively, the unit is just as dominant with Bryan Green, who has six interceptions this season, and Fitzgerald West, who is one of the future big time recruits in the 2022 class. In speaking of big time future recruits, the Knights have a prospect that can change the game on any given play in all three phases of the game whether it is on offense, defense, or even returning kicks, and he is big time 2021 prospect Sage Ryan. In order to defeat a team like the Knights, it will take a group effort.

One team that is way more than capable of doing just that is the Comets. The Comets, led by Hall of Fame coach Frank Monica, is looking for its first state championship since 2011. The Comets survived a double overtime game against the Catholic-New Iberia Panthers in the semifinals to get to this point. According to Brecheen, this may be the most talented team that Monica has coached, and that is saying a lot over his 50 years of coaching. Like the Knights, the Comets have a well-disciplined team that does not have many weaknesses. On offense, the Comets have a well-balanced attack led by athletic quarterback Justin Dumas, running backs Kennan Gauff, and Phillip Tran, along with an experienced offensive line led by five seniors, including Nicholls State commit Evan Roussel. On defense, the Comets are as stingy as ever led by Tulane defensive lineman commit Mason Narcisse, senior outside linebacker Eli Ory, and linebacker Mandel Eugene, who has a chance to become a great player when it is all said and done as he already holds an offer from Tulane as a junior.

The Comets do not beat themselves so if the Knights are going to win, the team will have to earn it. It is a great matchup between two great teams that are talented and well coached at all three phases of the football.

Win-Loss Records For Division III Picks (At Conclusion of Semifinals):