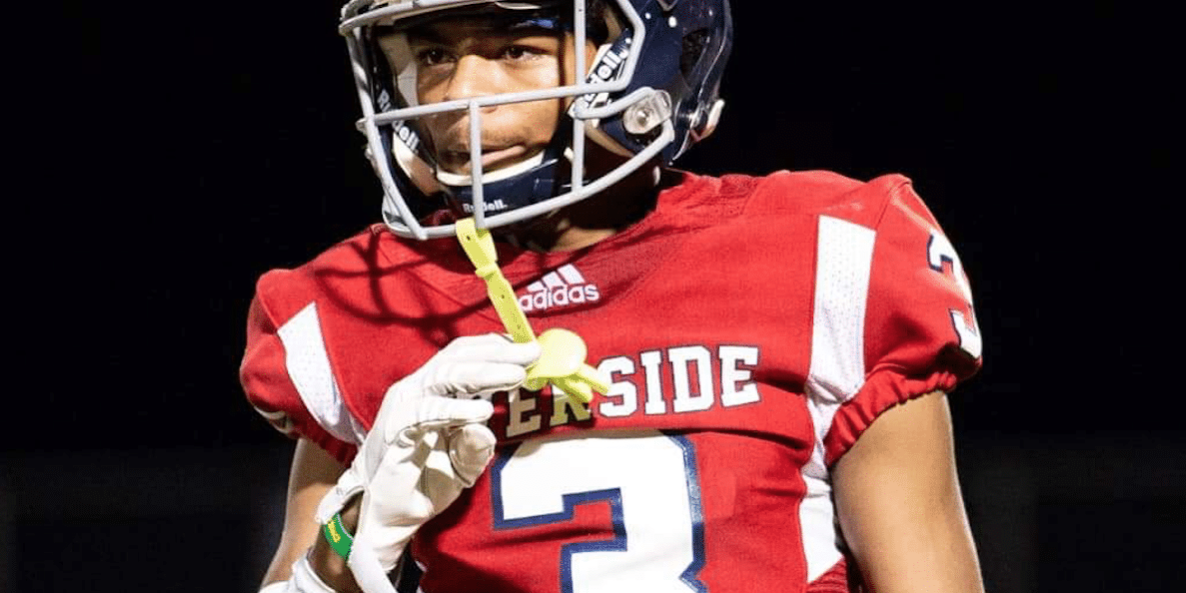 It has been 2016 that the Riverside Academy Rebels won a state championship, but Rebels fans are starting to feel like their team is back in the championship hunt thanks to a dynamic playmaker in senior Gage Larvadain. Larvadain may only be 5-9, 155 pounds, but what he lacks in size, he makes up for it with his incredible versatility and playmaking ability. Our own recruiting specialist Lee Brecheen has seen Larvadain make plays since his freshman year, but it is the plays he is making this year that has set himself apart from a lot of others. In fact, Brecheen has not seen a playmaker carry his team as much since a particular player that led the Hahnville Tigers to a state championship run a couple of seasons ago.

“Gage Larvadain is super talented,” Brecheen said. “He blew me away watching him play. The kid can play five positions and is the most gifted player to ever come out of Riverside Academy. He is electrifying and can be a difference maker for his team just like when Pooka Williams (Kansas) made a difference for Hahnville High School. He has got the It factor.”

The multitalented athlete spends most of his time under center at quarterback for the Rebels, but that is not the only position he will line up.

“I would say my versatility is my biggest versatility,” Larvadain said. “Being able to do multiple things and play multiple positions to help our team be successful is what I am proud of the most.”

In fact, whether it is at wide receiver or returning kicks and punts, Larvadain is so electric with the ball in his hands that the coaching staff makes sure number three will get a chance with carrying the pigskin. For this swiss army knife, there is no position that sticks out to him as long as he can use his God gifted abilities to help put points on the board for his team.

“I don’t think I have a favorite position,” Larvadain said. “I just like being in positions to make plays no matter where it is on the field.”

With blazing 4.45/40 speed on the football field, Larvadain’s natural athletic ability is easy for him, but stepping up and becoming a natural leader is something that he truly would love to work on.

“I try to be my own person, but there’s always guys that you look up too, and for me it’s guys like Russell Wilson (NC State/Wisconsin/Seattle Seahawks) or Deshaun Watson (Clemson/Houston Texans),” Larvadain said. “It’s easy to be good when things are going good or your way, but when the rough gets going, those guys become great. It is just their ability to perform with adversity, especially Wilson being undersized is amazing.”

Despite making things look so easily on the football field, the recruiting process has not been as easy so far for this Riverside Academy senior athlete.

“I have two NAIA offers from great school and programs,” Larvadain said. “I’ll continue to have faith in God and allow him to help me through this process, but until I make a final decision, my recruitment is open.”

Besides the NAIA offers, there are also some other programs showing some interests.

“There are a few schools that have taken interest,” Larvadain said. “I’ll just continue to control what I can control and put out good film.”

The film has been more than good, especially this season. After accounting for 2,400 total yards of offense in 2019, Larvadain is set for his best season yet in 2020. Led by head coach Kevin Dizer and his one man highlight reel at quarterback, the Rebels are currently 3-1 this season having already defeating LSU commit Matthew Langlois and the Catholic Pointe Coupee Hornets and also coming up just short against a heavily talented Newman High School football team.

“It’s definitely a confidence booster considering both teams beat us kind of bad last year, but it’s what we signed up for and it’s no surprise for the guys in our locker room,” Larvadain said. “It’s what’s expected for us.”

In 2015 and 2016, former head coach Bill Stubbs led the Rebels to a state championship victory and runner up finish respectively. Now, Larvadain and his teammates are expected to go back to their state title winning form.

“We want to rebuild the winning culture at Riverside Academy,” Larvadain said. “I think it’s started the way we’ve wanted it to. We’ve came up short in one game against a good team, but we have to continue to get better and not be satisfied with what we’ve done in order to win a state championship.”

When not playing football, Larvadain is still a natural athlete that plays basketball, but he even admits that playing multiple sports has helped him as not only as an athlete, but as a competitor.

“I play basketball and it helps me become a better leader considering you go from 50 guys to 12 on a basketball court. Also it helps with conditioning and that’s a big one especially while playing multiple positions in football,” Larvadain said.

As mentioned earlier, Brecheen believes that Larvadain made a tremendous jump from the previous seasons to this season on the gridiron, and he is not the only one to notice.

“I would say my ability to think the game and use it to my advantage,” Larvadain said. “For a long time, I was just playing and now, I can truly say I understand what coverage the defense is in, and where to go with the ball or I understand when to do something instead of just doing it without a purpose.”

Not only is he playing with a purpose on the football field, but he is approaching the recruiting process in the same way.

“I look for family based programs with strong foundations and belief in who they are, and what they want to accomplish,” Larvadain said.

As far as what kind of program should take an interest in Larvadain’s abilities, it is also what he is as a competitor that also sets him apart from the rest of the competition.

“My will to want to win, my ability to make sacrifices for my team, my leadership ability, and versatility is why college should take a chance on me,” Larvadain said.

Click link below to check out Gage Larvadain’s senior highlights: