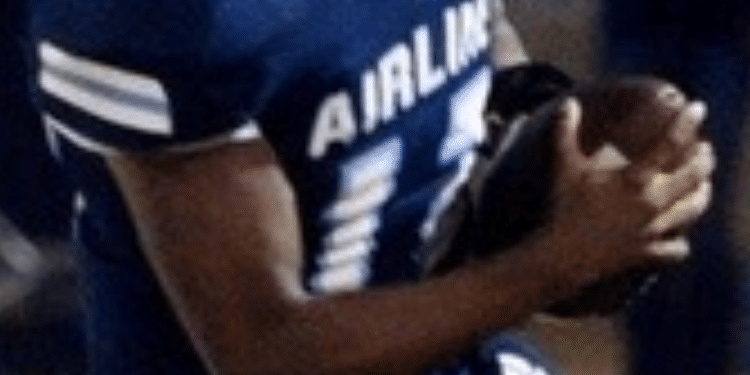 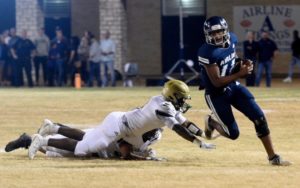 The Airline Vikings had an incredible season in 2019 going 10-3 and advancing to the Class 5A Quarterfinals. Although the season was successful, there was some adversity along the way as their head coach Bo Meeks was preparing for a different battle, which was cancer. As Meeks was fighting a different fight, he knew that he could rely on his quarterback Alex Garcia to take care of business on the football field.

“Last year overall was a little difficult with Coach Meeks and his cancer,” Garcia said. “Although he never really showed it, Coach Meeks is a tough man and his toughness radiated off to the rest of the team. For us, our best way to show that we care and are there for him was to win games and do what was asked of us.”

Garcia did much more on his end by not only leading the Vikings to ten victories, but also showcasing his skills by throwing for 2,735 yards and 30 touchdowns as well as earning All City, All-State, offensive player of the year and MVP honors. Not only has the 6-0, 185 pound award winning quarterback played well in difficult circumstances, but he did so in only his first season starting at the varsity level.

“My playmaking ability and being poised in difficult times are some of my biggest strengths,” Garcia said.

Playing your best football in difficult situations is one of the best qualities a quarterback can have and it shows. Louisiana Football Magazine’s recruiting expert Lee Brecheen had seen his potential in practice even before he had gotten the chance to start. Now, Garcia is showing everyone what he is capable of. Despite last year’s success, colleges are still trying to catch on.

“So far, I have not been on any visits or have received any offers,” Garcia said.

Although Garcia may have not received any offers at this point heading into his senior season, he still believes in his skillset and what he can offer as a quarterback.

“Last season was a great bounce back year for the team,” Garcia said. “We were hungry, focused, and all strived for the same goal. This year, we have a lot of new guys coming in on both sides of the ball with a lot of potential. I truly believe we can perform at a high level again.”

Garcia has also watched and emulated plenty of Super Bowl winning quarterbacks so he could bring that type of leadership to his team.

“I like watching Russell Wilson (NC State/Wisconsin/Seattle Seahawks) and Patrick Mahomes (Texas Tech/Kansas City Chiefs),” Garcia said. “Both guys are great leaders and play phenomenal football at the quarterback position. Like myself, Russell Wilson isn’t the biggest guy and is a playmaker. I also try to emulate Mahomes’ gunslinger mentality.”

Not only has Garcia watched, but he has also acted during this unusual quarantine period.

“Quarantine has allowed me to take a huge leap in my play,” Garcia said. “I’ve gotten stronger, faster, and am more accurate with the ball. I am also working out just about everyday to have a better year than last year. My message to my teammates is to adapt and to overcome in order to find ways to better yourself in a difficult time such as well.”

Getting a scholarship offer is what drives the Airline All-State quarterback this offseason, and he is not letting his weaknesses overshadow his strengths while doing so.

“I need to improve on my mental aspect of the game in terms of reading coverages,” Garcia said. “It is something I’ve devoted quite some time to this offseason, which is just being a student of the game and trying to soak in more and more information to maximize my potential.”

One can go on and on about how special Garcia is as a quarterback and as an athlete, but in order to understand him even more is to understand what he wants to do outside of football.

“I want to be a therapist or a dentist when I hang up the cleats,” Garcia said. “I think it’d be a nice occupation for me.”

Helping other people whether it is his family, Coach Meeks, or the rest of his team comes first priority to him.

“I’m a winner,” Garcia said. “I’m willing to go to extraordinary lengths to achieve and accomplish my goals. I also do what is asked of me and more.”

Garcia has already proved that he could do much more than what is asked of him, but now during this coronavirus pandemic, Garcia is asking for another chance this season to show why this resilient quarterback deserves a shot at the next level.

Click the link below to check out Alex Garcia’s junior highlights: