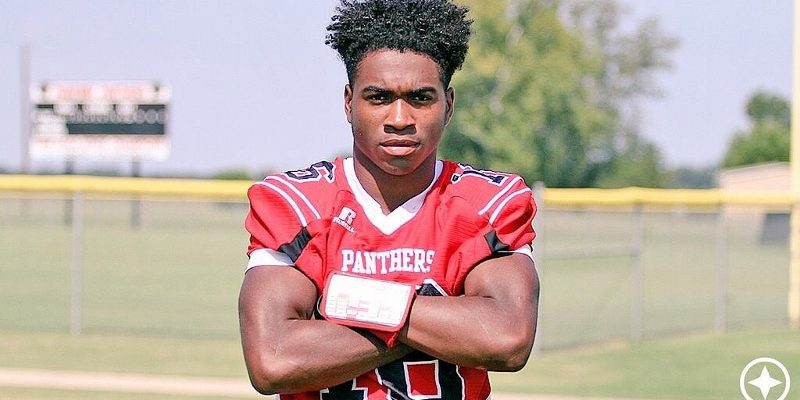 Talented Parkway Wide Receiver Johnathan Jones was another guy that has had interesting story throughout his career. Jones once played football for Evangel Christian the last couple of years and was expected to be one of the best returning players for the Eagles this year but he decided to transfer to not only another school but one of the main rivals of Evangel Christian in their own district in Parkway High School. Parkway High School has one of the best passing attacks in the entire state with great junior players at the skill positions in QB Justin Rogers and WR Terrace Marshall but maybe the key addition to the offense might be Johnathan Jones who is a senior and can be a playmaker at both wide receiver and defensive back. Jones is actually transitioning to defensive back after playing mostly wide receiver throughout his high school career. Playing both positions may help Jones in the long run when it comes to recruiting because he shows that he can not only play both positions effectively but at an elite level. Louisiana Football Magazine Editor and T.V. host Lee Brecheen believes that Jones could play defensive back in college even though he is making the transition.

“Johnathan Jones is the biggest sleeper at defensive back in the state just because he played wide receiver most of the time,” Brecheen said. “I saw him play at Evangel Christian and thought that he was a D-I wide receiver. Now, at Parkway, he is transitioning to defensive back and I believe that he is a D-I defensive back. He has got great ability as he can run a 4.45/40 but it is going to come down to which position he is going to play in the next level and I think he can get bigger and better than he is now.”

Johnathan Jones’ versatility may set him apart and this year, he is trying to prove to everybody that he can make plays no matter where you line him up. Check out today’s recruiting interview as we talk with the talented Parkway athlete as he talks about adjusting to a new team, the offense he plays in, his former days at Evangel, his famous cousin, playing wide receiver and defensive back, and so much more in today’s recruiting interview!

LAFM: What is your ACT/GPA score?

LAFM: What is your 40 yard dash, max bench press, max squat, and vertical?

LAFM: What were your stats and accomplishments as a football player last year?

LAFM: You have a couple of offers from different schools. What are the schools and is there a top three that you are looking at?

TCU, UCLA, Purdue, UTSA. My top three are UCLA, TCU, and I will be attending Texas A&M this Saturday.

LAFM: Last couple of years, you played for Evangel Christian and transferred to Parkway High School. What made you decide to transfer to not only another school but Evangel’s rivalry school?

My father stays in Parkway’s district which gave me the chance to play with former Evangel players such as Nick So’oto, Terrace Marshall, and Anthony Jones.

LAFM: You spent the offseason with a new team. How hard was it for you to adjust to new teammates and a new offense?

It was pretty easy to adjust to the new offense and I’ve always had a connection with not only Parkway’s players but players at all schools in Shreveport/Bossier.

LAFM: How tough was it for you personally to lose to Evangel Christian the way the team did?

It was a tough loss but I know what Evangel is capable of and I know what we are capable of. We made a lot of mistakes and they took advantage and came out with the win.

LAFM: You play wide receiver and defensive back. Which position do you personally want to play in college?

I would like to play receiver in college but I’m getting a great feel for cornerback as well.

LAFM: What is it like playing in an offense like Parkway with a great junior quarterback in Justin Rogers and a great receiver Terrace Marshall?

It’s great. They are great athletes and friends. I’m grateful for them both as well as the rest of the team.

LAFM: What are the team goals for Parkway after the great 4-1 start?

Our team goals are to be more disciplined and play the game with a swagger.

LAFM: What are your individual goals for the rest of the year?

My individual goals are to show that I can be the best receiver for the class of 2017.

LAFM: What are your strengths as a wide receiver/defensive back?

My strengths as a receiver is that I’m aggressive with my route running and I create major separation from press on and off coverages. As a cornerback, it’s that I read the offense and the receivers well and know where the quarterback want to go with the ball.

LAFM: What are some aspects to your game that you need to improve on?

I need to improve on reading not only my corner but an entire defense.

I would compare myself to Odell Beckham (former Isidore Newman and LSU wide receiver currently playing for the New York Giants) because we run our routes similarly and go after the ball in the same way.

I pray and thank God for blessing me the previous game.

I would like to prepare for the next level in every way both physically and mentally.

LAFM: Is there anybody in your family that has played either high school, college, or pro football? If so, who are they and where did they play?

My cousin Morris Claiborne played both in college and the NFL for LSU and the Dallas Cowboys as a defensive back.

LAFM: Is there anybody that you want to give a shoutout to?

My mom. She is there through everything. Ups and downs, it doesn’t matter. She’s always there at every game cheering me on.

LAFM: What do you want to prove to all the college coaches and scouts reading this article?

I want to prove that they can depend on me and once I give you my word, I stand by it. Also, I can be the best player to come through if they give me a chance.