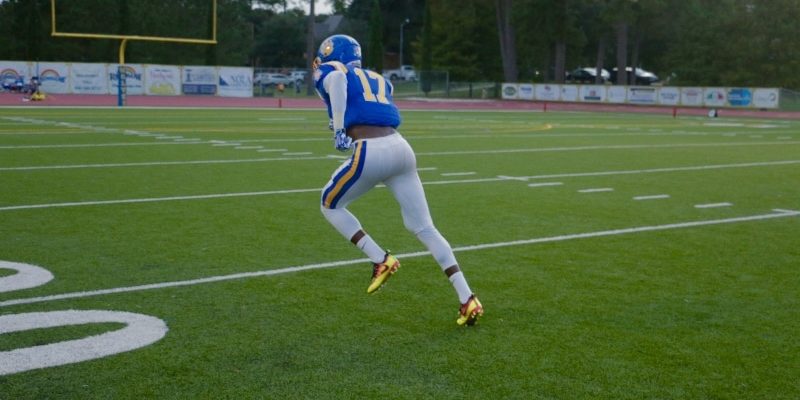 The St. Paul’s Wolverines had themselves a great season going 10-2 and only suffering two losses to Evangel Christian and Edna Karr. Both of those teams would go on to win a state championship in their perspective classification and both by a combination of two touchdowns. In order to be a great team, there must be some quality players on the offensive and defensive side of the football. One of those players on the offensive side of the football is St. Paul’s WR TJ Bedford. Bedford was named to our preseason All-Louisiana 2nd team as a wide receiver. At 6’4, 195, Bedford has the size and leaping ability to out jump defensive backs and pinpoint the football. It also does not hurt that Bedford is also a star basketball player as well. Louisiana Football Magazine Editor and T.V. Host Lee Brecheen had this to say about Bedford and his ability as a football player.

“TJ Bedford is a basketball player turned football player,” Brecheen said. “He is kind of like Terry Baham from Slidell and Brandon Rachal from Natchitoches Central. Bedford is tall and unbelievable with the ball when it is in the air. I believe that he is the best recruit at receiver ever to come out of St. Paul’s and that even includes Jalen McCleskey, who came out of St. Paul’s and is now an All-Conference receiver at Oklahoma State.”

Bedford is a very talented receiver who made some really nice catches and for big yards. As of right now, there are plenty of schools that have offered Bedford, but he is uncommitted and still weighing his options. In today’s recruiting interview, the talented senior St. Paul’s wide receiver talks about his career at St. Paul’s, his senior season, the incredible catches that he has, basketball, recruiting, and so much more.

LAFM: What are your stats and accomplishments this season?

LAFM: This year, the team went 10-2 with the only losses coming to state champions Evangel Christian and Edna Karr. Even though the season ended in a disappointing ending, what do you have to say about this year’s team and the season as a whole?

I feel like we had a really great team this year and played every game 100% even though we fell short at the end.

LAFM: You had a pretty impressive catch against Edna Karr. Tell us what was happening leading up to that great catch.

Well, we were down by two touchdowns in the fourth quarter, and we needed a big play. Coach called the post, and I was ready to make a play to get us going.

My hands and ability to use my height to go up and get the football are my strengths as a wide receiver.

As of now, I am working on my explosiveness.

LAFM: It turns out that you are a really good basketball player as well. If you had to choose a sport to play in college, which one do you want to play?

Football is the sport that I want to play.

LAFM: What are some things that you look at when you are looking at colleges?

The atmosphere is the main thing that I look at colleges.

LAFM: Out of all the games that you played, which game sticks out to your mind while at St. Paul’s?

The Edna Karr game this year really stuck out to my mind.

LAFM: Who was the toughest defensive back that you played against this year and why?

Jesuit because they double covered me and the cornerback that was covering me was really fast.

LAFM: Do you have a college or NFL wide receiver that you model your game after? If so, who and why?

LAFM: The team played a very tough schedule this year with the likes of Evangel Christian, Edna Karr, Jesuit, etc. What team was the best team that the team faced all year?

Edna Karr was definitely the best team that we faced all year long.

LAFM: What will you remember most about playing football for St. Paul’s?

The tradition is the best part about playing for St. Paul’s.

LAFM: What is an interesting fact about yourself that nobody else knows about?

LAFM: Is there anybody that you would like to give a shout out to for helping you be in the position that you are in today?

I want to give a shout out to my mom, my stepdad, my family, the coaches and the Monterio family.

LAFM: What separates you from any wide receiver in the state?

My work ethic and my hunger to make big plays separate me from any wide receiver in the state.