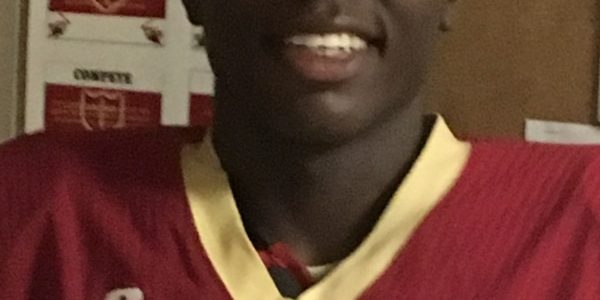 Louisiana is known for having some of the best high school football talent in the country. The position that is constantly talented every year in Louisiana is the wide receiver position. There is no exception for this year. The state has a very deep class at the wide receiver position that includes other studs like Devonta Smith (Amite), Al’Dontre Davis (Lutcher), Zacch Smith (Wossman), etc. The wide receiver we are mentioning today may be just as good or better than all those guys. Brother Martin Wide Receiver Jeremy Singleton is one of the very best wide receivers in the entire state and is one of the best in the entire country. If you look back not only this year, but in years past, Louisiana had some solid receivers. Look at Odell Beckham Jr. (LSU and New York Giants), Jarvis Landry (LSU and Miami Dolphins), and Malachi Dupre (LSU) who all came from this state over the last five years. Singleton could be the next great receiver to come out of this talent rich state of Louisiana. Singleton has the ability to run smooth routes coming out of his breaks and has big time speed. As of right now, Singleton is committed to play for the University of Houston. This could be a huge pickup for the Cougars because of the type of player that he is. When Louisiana Football Magazine Editor and T.V. Host Lee Brecheen sees Singleton play, he is reminded of a big time player that came out of LSU a couple of years ago and is now a NFL star.

“Jeremy Singleton is really fast and very underrated,” Brecheen said. “The team has so many weapons that they don’t necessarily have to throw him the football too much. He runs a legit 4.40/40. I saw him play as a sophomore as well as a junior and thought of Odell Beckham Jr. in build and speed. I’m not saying he is Odell but he definitely has that look in his game.”

To be even mentioned with the same name as someone like Odell Beckham Jr. shows how special Singleton is as a wide receiver and a playmaker. Singleton’s team is full of offensive weapons including highly recruited runningback Bruce Jordan-Swilling and WR Erick Lassair to mention a few. Last season, Singleton caught over 50 passes for 993 yards and 16 touchdowns and this is in an offense where there are playmakers all over the field. Imagine what Singleton’s stats could be if he played for a smaller school. The Crusaders started off the season as the number one team in 5-A. The team’s record at 4-3 is somewhat disappointing after the preseason rankings but the team has played some tough teams including Plaquemine, St. Stanislaus, Edna Karr, John Curtis, St. Augustine, Sulphur, and Holy Cross who all have a combined record of 31-10. We caught up with the star wide receiver from Brother Martin who made our 1st team All-Louisiana team as he talked about the season, the Houston Cougars, the receiver that he compares himself to, the schedule, and so much more in today’s recruiting interview!

My name is Jeremy Singleton. I play wide receiver for Brother Martin High school and I am 17 years old.

LAFM: Jeremy, you are committed to the University of Houston. What is it about the Houston Cougars that draws your attention?

The way those guys play, the way Coach Herman handles his team as well as an opportunity to be great in football and receive a great education are some things that drew my attention.

LAFM: Tom Herman has done a great job coaching at the school and there are a lot of big time programs that might offer him the job. If he leaves, does it change your opinion at all?

My opinion changes a little. That’s something I think about so I keep a couple schools that were interested on my list just in case things do change.

We were disappointed but it was a chance for us to regroup and finish the season off playing our best football. A lot of teams started off 0-3 last season and ended up making deep runs into the playoffs.

LAFM: This may be one of the best offenses in the state with the likes of you, Bruce Jordan-Swilling, and everyone else. Where would you rank this offense with everybody else in the state?

I would say we are the best. We can run the ball and when you try to put eight guys in the box to stop Bruce, that is when we can air it out.

Bruce and I are tight. We are always making sure our team is working hard in practice. We always stay on each other’s case pushing ourselves to be better.

LAFM: Is it hard to focus on the season with recruiting going on at the same time?

Not at all. When it’s time for football, all that goes away. Every time I step on the field, I want to play like I’m playing for more offers.

I need to work on high pointing the ball and working against double coverage.

LAFM: What are your individual goals?

LAFM: What are the team’s goals for the rest of the season?

We are just taking it week by week focusing on us.

LAFM: What is it like playing the likes of John Curtis, Rummel, St. Augustine, Jesuit, etc. every week?

LAFM: Which one of those teams do you enjoy playing against the most and why?

Jesuit. Those guys always give us their best and it really makes us pick up our game.

LAFM: If you had to compare yourself to a college or NFL wide receiver, who would it be and why?

my mom and all of my coaches

LAFM: What is an interesting fact about you that we don’t know about?

I like to cook. I’m a big food person.

LAFM: What separates you from all the other wide receivers in a very deep class in the state?

My great speed and playmaking ability. I can also play slot or outside and be productive from both. I’m a great blocker as well.