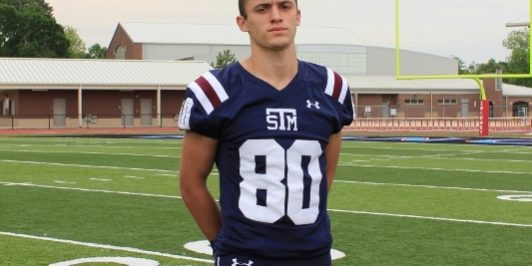 For the first time in their storied football history, the St. Thomas More Cougars won the state championship. With standout players like Nate Cox and Hunter Bergeron orchestrating the offense and defense, other playmakers emerged like WR Griffin Hebert. Hebert is one of the best receivers in the state and was in an offense that likes to throw the football all over the football field. He has been a dynamic wide receiver for the Cougars throughout his high school career. What the team is known for is having great wide receivers in the past and Hebert is the next guy in line when it comes to the rich history of great football players in this program. At 6-3, and over 200 lbs., he is a big target that is a deep vertical threat but can also run a lot of different routes. Not to mention that he has really good hands as well. In the preseason, he was named to our 1st Team All-Louisiana team as a wide receiver, which is a position that is probably the deepest in regards to talent in the state. This season, he did suffer some injuries that prevented him from having a great regular season, but he got healthy in time for the playoffs to help the team secure their first ever state championship. Louisiana Football Magazine Editor and T.V. Host Lee Brecheen has some high praise for the St. Thomas More receiver.

“I saw Griffin Hebert play at least five times in two years.,” Brecheen said. “I think he has a chance to be a Jordy Nelson (Green Bay Packers) type WR. He has great size at 6’2, 200 pounds, has great hands, is a good route runner, and most of all, can go and get the long ball and separate with his legit 4.5 speed.  I think he is the most complete WR coming out in Louisiana. I don’t pay attention to rankings, but what I see in full games and I saw them all in the 2015 and 2016 seasons. Louisiana Tech will get a game ready WR to ease the loss of Carlos Henderson and Trent Taylor. What was  most impressive is when I went to a playoff game against Carencro High School and Hebert just came back from a injury and was still not 100 percent, but he was the team MVP that night with his toughness against a pretty good team, who could not guard him all night. He is the best WR to come out of STM since Javon Walker (Florida State).

Even though Griffin Hebert has a lot of offers, it looks like he has made his decision on where he is going to play football and that is Louisiana Tech. With record setting receivers leaving the Bulldogs in Trent Taylor and Carlos Henderson, Hebert could be the next one in line just like he was at St. Thomas More. Check out today’s recruiting interview with the Louisiana Tech commit as he talks about his high school career, winning the state championship, the wide receiver he models his game after, the former football player that is really close with, and much more!

St. Thomas More WR Griffin Hebert is a deep threat but can also run every route and is very good running after the catch. (Photo courtesy of Rick Furman)

LAFM: What is your GPA Score and ACT score?

LAFM: What is your max bench, max squat, vertical, and 40-yard time?

The area where I need the most improvement is maintaining speed out of breaks.

I was part of the first ever state championship team at STM. I received player of the week and All-District Acadiana.

My strength is deep balls and top speed.

LAFM: What are things you need to improve on?

Speed out of break.

I get to know college coaches when considering a college. I also look at the academic side as well.

LAFM: Who was the toughest corner back you faced and why?

The toughest DB I have ever played was Todd Harris from Plaquemine. He had the best hips and quickest change of direction.

LAFM: What are some of your hobbies when the football season is over?

I play basketball for STM, and I also hunt and fish.

LAFM: Who is your favorite NFL wide receiver and why?

Jarvis Landry (former wide receiver for Lutcher and LSU currently with the Miami Dolphin). He is the reason I wear #80. He made some amazing plays at LSU, and I have followed him to the NFL.

LSU, because my parents would always take me to games, and they are fun to watch.

LAFM: What is your favorite route to run?

My favorite route is a fade.

St. Thomas More WR Griffin Hebert beats a U-High defensive back one on one for this touchdown grab. (Photo courtesy of Rick Furman)

LAFM: What is your go to pre-game meal?

My go to pregame meal is spaghetti.

LAFM: What do you want to major in college?

LAFM: Who is your biggest role model?

My biggest role model is Jacob Hester (former fullback for Evangel Christian, LSU, San Diego Chargers, and Denver Broncos). I’ve known him for a long time and even went to his wedding. He is my role model because he is a great leader and always stays positive.

I am a soccer fan and FIFA is my go to video game.
(Interview done by Alex Martin)