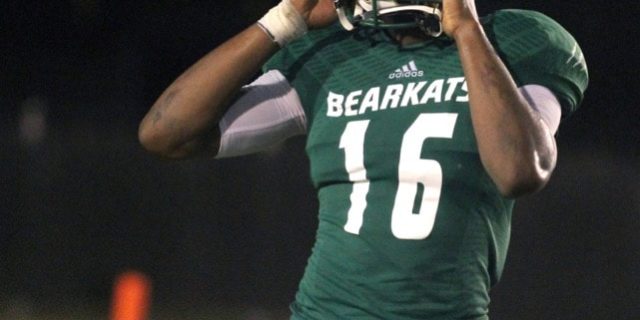 The Bossier High School Football Team is one of those teams that don’t have the depth as a lot of 4A programs have, but they do have a lot of guys that compete and fight their heart out playing both ways. Bossier TE/SS Kevin Bonapart is one of those players. Here is a guy that plays multiple positions such as Tight End, Strong Safety,and even is the starting kicker and  punter. He has pretty much done anything except being the waterboy. This is a guy that is unselfish and will do whatever for his football team and that is all a coach can ask for. He has a lot of talent. This season, he averaged five tackles a game, over 40 yards per punt, and 12 yards per catch.Now, that is what I call versatility. Bonaport is also a great blocker and is a crucial part in the running game. Even though he is a little undersized in weight at 210 pounds, Bonapart is 6-4 in height and gives it his all every play.  The Bearkats have many players on the team like that and Bonapart is just the guy who is the model for that. Louisiana Football Magazine Editor and T.V. Host Lee Brecheen believes that Bonapart is a sleeper for Division II and if he continues to improve and grow, he could be a Division I player.

“I have seen Kevin play in person,” Brecheen said. “He plays a lot of positions for his team, but I believe he can play defensive end at the next level. He is a strong sleeper for Division II, and if he continues to improve, he could possibly play D-I.”

As far as Kevin Bonapart’s high school football career, it has been a good one with the many things that he has done on the football field and at a high level that he has played four different positions. Unfortunately, it is going to be over as the Bearkats barely missed the playoffs ending their season at 4-6, but senior leaders like Bonapart will set the stage for the program in the years to come. A couple of weeks ago, we caught up with the do-it-all playmaker from Bossier as he talked about the position that he wants to play in college, playing with his teammates, his offers, what he wants to do when his career is over, and so much more in today’s recruiting spotlight.

Kevin Bonapart has some speed as he outruns defenders on his way to a first down. (Photo provided by Kevin Bonapart)

LAFM: What is your 40 yard dash, max bench press, max squat, and vertical?

LAFM: What is your GPA score?

I do not any offers, but Grambling State University and Northwestern University have shown interest in me.

LAFM: What are your stats and accomplishments this year?

LAFM: You play both Tight End and Strong Safety. What position do you rather play in college?

It does not matter which position that I play in college.

My strengths are my speed and vision.

LAFM: What are aspects to your game that you need to improve on?

I need to get a little faster and stronger as well as improve my footwork.

LAFM: How long have you been playing football?

I have been playing football since 7th grade.

LAFM: What got you involved with playing football?

Seeing how fun it was and how it made me feel free.

Greg Olsen (Carolina Panthers Pro Bowl Tight End) because he’s a great down blocker and knows how to catch.

LAFM: What are your individual goals heading to this year?

My goals were to create a special bond with my teammates and win more games than last season as well as getting faster and stronger.

LAFM: Did you accomplish those goals?

Yes, I accomplished all of my goals, but I always could’ve gotten better.

I want to be a zoologist.

LAFM: This year, the team had an up and down season at 3-5. What does the team want to accomplish in the next couple of games?

We need to work as one unit and win the next couple of games. (Team finished 1-2 in final three games)

LAFM: Is there a specific game that sticks out in your mind playing for the Bearkats?

Every game because Bossier is always the underdog for everything so myself and my teammates just have the Bearkat pride within our hearts, and we never go out without an fight.

LAFM: Are there any teammates that you want to give a shoutout to?

I want to give a shout out to Keimun Daniels, Omar Green, Mario Flores, Gio “Escalate” Galvan, who are all mostly seniors. I also wanna give a shout out to the whole team for getting us better in practice especially S.Thomas, the sophomore, for going 100% on every play.

LAFM: Is there anybody in your family that has played high school, college, or pro football? If so, who are they and where did they play at?

My teammate/uncle Daniel More plays on the team with me at Bossier High.  Uncle Bobby Ray Tell played for the Haynesville Golden Tornadoes and then played for the Louisiana Tech Bulldogs.

LAFM: What separates yourself from any other football player in the state?

I think my attitude, effort, and love for the game separates me from other players as well as my abilities to do certain things on the field.

The Sports Scouting Report Podcast With Lee Brecheen Episode 161: Oscar Shoenfelt On His New Book “Sports Agent: Up The Mountain And Down”
May 5, 2021

Louisiana Connections To 2021 NFL Draft (Fourth-Seventh Round Edition)
May 5, 2021