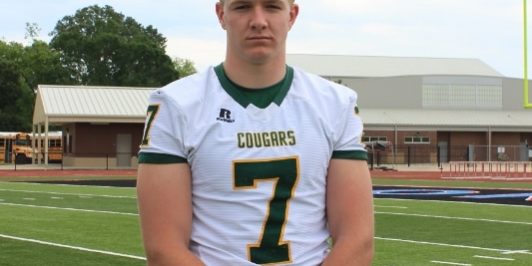 Cedar Creek TE/DE Nicholas Slusher is one of the most underrated players in the state at tight end and defensive end. Over his high school career, he has accomplished a lot. He was named All-State in his junior year and has not only started for Cedar Creek every year but was also named All-District ever since his freshman year. Nicholas Slusher was also named Ruston defensive player of the year in his junior year. All of these accomplishments led to him making 2nd team All-Louisiana for us in the preseason. Not only does he get the job on the field, but he gets the job done off the field as well. This year, he was named Academic All-State. This is a bright guy who is a great football player and that is a combination that a lot of coaches would love to have. He also looks the part at 6’4, 238. Slusher is somebody who can excel at two positions whether it be tight end or defensive end. Not a lot of people are talking about him but he definitely deserves some recognition for what he has accomplished in four years while playing for the Cougars. As of right now, the talented defensive end/tight end has committed to play for Army which says more about his high character as well. Louisiana Football Magazine Editor and T.V. Host Lee Brecheen had this to say about Nicholas Slusher before the season started for the All-Louisiana Team selections.

“Nicholas Slusher is a great blocker,” Brecheen said. “Slusher is kind of like another offensive lineman or a blocking tight end. He needs to work on his pass catching skills. He plays defensive end for the team as well and I believe that he can play either tight end or defensive end at the next level. He is going to be a kid who is going to grow over 250 pounds in college and also has some speed to him. When he figures out how to catch passes, he is going to be a dangerous tight end.”

Brecheen believes that he is going to play tight end in college, but it is up to Army on how they are going to use the versatile Nicholas Slusher from Cedar Creek. We caught up with the Cedar Creek senior tight end/defensive end to talk about his career, the player that he models his game after, Army, and so much more in today’s recruiting spotlight!

Cedar Creek TE/DE Nicholas Slusher definitely looks the part of a tight end or a defensive end and shows it on the football field. (Photo courtesy of Darrel James)

LAFM: What is your max bench press, squat max, and 40 yard time?

LAFM: What are your accomplishments on the football field over your career?

LAFM: What are your strengths as a tight end or a defensive end?

My strengths,as a defensive end/linebacker, are having a good motor and good speed for my size.

LAFM: What are some areas that you want to improve on when you get to college?

I want to get stronger and faster in college. I also want to become better at the technical stuff.

I am committed to play football at Army (West Point).

I look at the school’s academics, academic programs, the student body, and the football facilities as well as the program itself.

LAFM: Let’s talk about the season. The team had a really good regular season but the team had to face the eventual state champion Southern Lab Kittens. What are your thoughts on your senior season as a whole?

We had a great year this year. I felt like we were focused the whole year and played well the entire season. We just kinda ran into a buzz saw (Southern Lab) at the end.

LAFM: What was the best game that you have played while at Cedar Creek and why?

My best game at Cedar Creek was ,without a doubt, the Highland Baptist game in the 1st round of the playoffs last year. I loved it because it was a dogfight and we came out on top.

J.J. Watt (Three time defensive player of the year for the Houston Texans). He is an incredible player who works his tail off every day to get better. Everyone respects him on and off the field. He also constantly gives back to the community, and in my book, that’s what it’s all about.

Cedar Creek TE/DE Nicholas Slusher admits that his primary position is defensive end but he will play anything that would help his team win. (Photo courtesy of Darrel James)

LAFM: What is an interesting fact that our readers don’t know about you?

I like to workout and hangout with my friends.

LAFM: You were named to our 2nd team All-Louisiana team at the beginning of the season. What does that mean for you to be recognized as one of the best players in the state?

It is a huge honor!

I don’t really have a pregame routine.

I want to give a shout out to my coaches and teammates. I would be nothing without them!

I’ve had the great privelage to play next to my brother Ben Slusher for the last three years of my high school career. It’s made football even more enjoyable!

I want to play defensive end in college simply it is what I’ve played primarily throughout my career, but if they need me to play tight end at Army, I will be more than happy to play what helps the team the most.

LAFM: Why should college coaches consider you to play for their program?

I can promise that I’ll give it my all for them doing whatever they ask me to do.