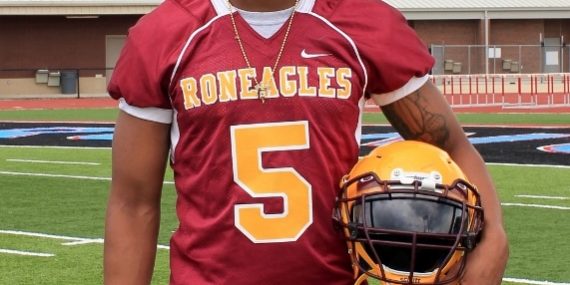 The New Orleans area is rich with football talent on the offensive and defensive side of the football, and if you look at McDonogh 35, they have one of the most talented players at his position in Brad Stewart. Along with Kevin Berthey and Joseph Fouca, the McDonogh 35 secondary was one of the strongest in the state in 2016. This season, Stewart put up some ridiculous numbers such as 111 tackles, 13 pass breakups, and 11 interceptions. A lot of high school defensive backs do not even get multiple interceptions in a career much less a season. What Stewart did this year was incredible, but it was not a huge surprise to a lot of people including Louisiana Football Magazine Editor and T.V. Host Lee Brecheen.

“Brad  Stewart is the best safety that I saw in Louisiana in 2016,” Brecheen said. “He is tough and could be a future All-American. He is the kind of kid that makes wide receivers think twice about catching the ball because you will get hit.”

Brad Stewart is a very special talent because he is a hard hitter, a ball hawk, and can play safety as well as cornerback. This season, the Roneagles made it pretty far in the playoffs going all the way to the semifinals where they lost to another New Orleans team with talented players in Edna Karr. The LSWA 4A defensive player of the year racked up a lot of postseason awards and accomplishments, and now that his football career is over, he now focuses on what college he will play next year as he has a lot of offers from prestigious D-1 programs such as Florida, Alabama, and USC. Louisiana Football Magazine’s own Alex Martin caught up with the big time defensive back from McDonogh 35 to talk about his high school career, recruiting, his hobbies, and so much more in today’s recruiting spotlight!

Whenever McDonogh 35 SS/CB Brad Stewart has the ball in his hands, he is always a threat to score. (Photo courtesy of Byron Mitchell photography)

LAFM: What are some of your accomplishments throughout your career?

I started as a freshman and ever since I was named 9-4A MVP, 2016 All-Metro Defensive Player of the year, and 2015 honorable mention All-Metro.

LAFM: What are your strengths as a Defensive Back?

I study film which gives me the ability to read plays and get to the ball. When I’m at CB, I study the receiver to know his strengths and weaknesses. When I’m at safety, I read the QB’s eyes, checks, and tendency.

I know there is always room for improvement, so I’m always working on improving my overall game.

Offenses have to keep their eyes on Brad Stewart as he not only lines up at safety but at corner as well. (Photo courtesy of Byron Mitchell photography)

LAFM: What are some things that you do when you are not playing football?

I like to relax at home and just chill, play Madden, and work out.

LAFM: What was your best game while at McDonogh 35 and why does it stand out to you?

My best game occurred on September 3, 2016  vs. St. Augustine. It was the 1st game of the season. I had a great game with two interceptions including one for a pick six. I also scored on offense while being double covered. It was a great way to start my senior season.

LAFM: Who is the college or NFL defensive back that you model your game after and why?

Marcus Peters (former Washington Huskie and current Kansas City Chiefs All-Pro cornerback) is who I model my game after because he is a play maker, a game changer, and a pick magnet.

Spaghetti Surprise is my favorite meal. My mom has cooked the pre-game meal for McDonogh 35 since my freshmen year.

LAFM: Who is you favorite music artist that you listen to before every game?

I pray before every game.

LAFM: What is an interesting fact about yourself that we don’t know about?

LAFM: Is there anybody in your family that has played high school, college, or even pro football? If so, who is it and where did he play?

LAFM: Do you want to give a shout out to all the people that helped you get in the position that you are in today?

I want to give a shout out to Coach Reese, Coach Daggs, and Coach Landry who brought me to McDonogh 35 as well as a special shout out to my mother Jackie Baham-Robertson and stepfather Nick Robertson who have both been there every step of the way, and myself for working hard and staying dedicated to the game.