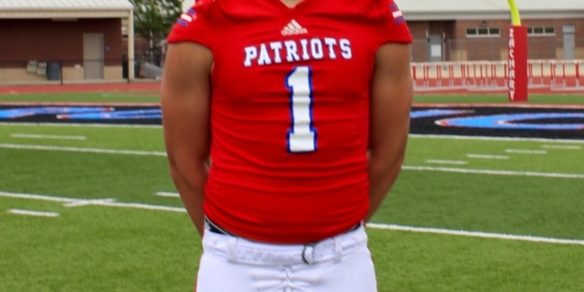 The John Curtis football program led by J.T. Curtis is one of the most successful programs, not only in Louisiana, but in the entire country with their 26 state championships and the number of players that have gone on to have great careers at the collegiate and professional level. The next great John Curtis player that may be next in line is senior SS Garret Wallow. Wallow is one of the best strong safeties in the entire state. Wallow is very versatile and shows his versatility on the football field. There is not one thing that he cannot handle. First of all, he is a great tackler in open space. Second of all, he is good in coverage and is a smart football player that can read plays quickly, but most of all, he is not afraid to hit somebody in the mouth. He can hit like a linebacker and can cover like a defensive back. Those qualities make him a very dangerous weapon on defense and also led him to a great individual season. The All-State Safety had over 70 tackles including five for loss and four interceptions. Another interesting stat is that Wallow led the team in tackles in multiple regular season games this season. That is not bad at all considering that he plays on the last line of defense. Before the season started, Wallow was recognized to our 1st All-Louisiana team and Louisiana Football Magazine Editor Lee Brecheen had some high praise for the talented John Curtis safety as he compared him to a great LSU All-American safety in the 2000’s.

“Garret Wallow is the closest player that I’ve seen to Craig Steltz (Archbishop Rummel and LSU) in a long time,” Brecheen said. ” He is big, tough, and is a big-time safety.”

After his great high school career in which he was named 1st Team All-State twice, Wallow will take his talents to Fort Worth, Texas where he will play for the TCU Horned Frogs. Watch out for Wallow as he continues the rich and storied tradition of great players to have come through the John Curtis program. In today’s recruiting article, Garret Wallow talks about his high school career playing for the Patriots, his commitment to TCU, the safety he compares himself to, and so much more!

John Curtis SS Garret Wallow catches his breath and for good reason as he hardly takes a play off on defense. (Photo provided by the Wallow family)

LAFM: What is your max bench press and max squat?

LAFM: What are your stats and accomplishments while at John Curtis?

LAFM: What are your strengths as a safety?

I am physical and can read formations well.

I need to improve on my speed, my breakout of my back peddle, and my ball skills.

LAFM: What college or NFL safety do you model your game after and why?

Sean Taylor (late, great safety for the Miami Hurricanes and the Washington Redskins). He played with a lot of enthusiasm and a lot of heart.

LAFM: You have committed to TCU. You also got a lot of other offers from D-I schools. What is it about the Horned Frogs that attracted you to commit there?

LAFM: Let’s talk about the season. John Curtis is expected to go to the Superdome every single year. How disappointing was it this season not to get there after a great regular season?

It was a tough loss to Evangel, but the guys fought hard and I’m very proud of every effort they gave.

LAFM: What was your favorite game that you have played in your career and why?

My favorite game had to be in my sophomore year against Evangel Christian. Getting that first interception to give our offense the ball to close the game was the best feeling in the world.

Take your time and really make a decision that you can picture yourself in for the rest of your life. When you get that feeling of home from a college, don’t pass it up.

Either sports management or sports medicine

LAFM: What does it mean for you to be a part of the great John Curtis football tradition?

It is a big tradition, and I wouldn’t have wanted a better bond with the people that I was coached by and around all my seven years there.

LAFM: Your team had a really tough schedule this year with the likes of eventual state champions Landry Walker and Evangel Christian. What team, in your opinion, was the best team that you played this season and why?

I feel as Evangel was the best team we played this year, not just because that was the team that broke our undefeated record and a chance to make it to state. They were physically and mentally prepared more than we were.

LAFM: You were named to our 1st All-Louisiana team in the preseason. What does it mean for you to be recognized as one of the best in the state at your position?

It’s just truly a blessing that God has given me a talent to work hard every day and progress what I was given. Most kids would die to be in my position, and that makes me more thankful than I would ever know.

LAFM: What are other sports that you participate in when football season is over?

I used to play baseball, but I am running track this year.

LAFM: What is your message to next year’s John Curtis team?

Work harder for next year than you did this year. There’s always somebody that wants your spot. The more y’all come together and bond as a team, the more protection and trust y’all have with each other. Lay it all on the line and at the end of the day, I believe that next year is going to be the year to make it happen and be successful for a state title.

My father played at all three levels.

John Curtis SS Garret Wallow gets into position before a play. (Photo courtesy of Steve Dalmado from Max Preps)

I want to thank my family and my mother because she has busted her back as a single parent to shape me into the person that I am today. All my credit goes to her.

LAFM: What makes you unique from other defensive backs in the state?

I work hard on and off  the field. I study my film like it’s one of the classes, and I always want to get better even if it is the smallest step I could take to improve my play.