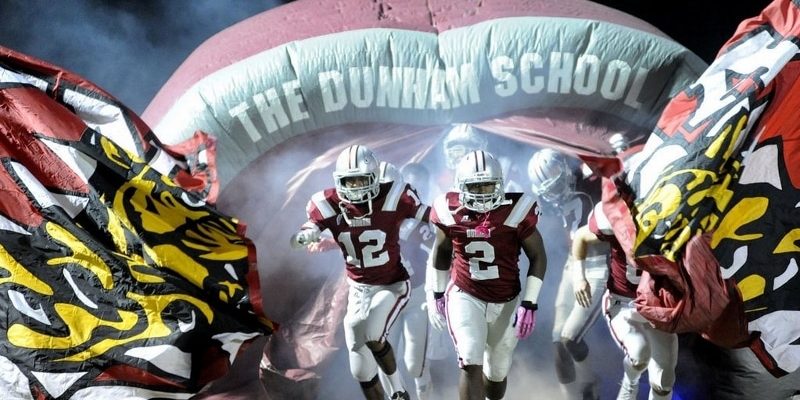 Senior Dunham running back Tony Huey is showing people that he is also a great running back in the Baton Rouge area. There are a bunch of guys making headlines in the area but it seems like that Huey is getting overlooked and his stats show you that he belongs in the category as one of the best running backs in Baton Rouge. This year, Huey has 1,000 yards of total offense and a ridiculous 26 rushing touchdowns which leads the entire state for a non-quarterback. Every carry, Huey gives his best effort on the football field and for good reason. In 2011, Huey’s father, who was really close to him, passed away tragically after a courageous fight with cancer and this year, he has dedicated his senior season to his father. Huey has a lot of heart and does whatever it takes to help his team win. He also plays on defense as a linebacker and is also a special teams player. He is very vocal and tries to get his teammates in position to win. Coaches would love a guy like Huey, who is very passionate and a really good football player. Louisiana Football Magazine Editor and T.V. Host Lee Brecheen loves what he sees when he watches Huey play and believes that he is undervalued as a runningback.

“Tony Huey is very underrated as a Division I-AA prospect,” Brecheen said. “He hits the hole quick with a lot of power and is very tough to tackle.”

Huey had some pretty impressive games this year including over 300 yards rushing and three touchdowns against East Feliciana. He also had five touchdowns against Archbishop Hannan in week one this season. Not only is he an impressive runningback but he also made All-District as a linebacker. Huey has been one of the main key players for the Tigers as the team is at 7-1 and a chance to have a high seed in the playoffs. The Tigers had a tough game losing to district rival Madison Prep, but all the goals are still in line for Dunham especially with a highly optimistic leader and playmaker Tony Huey on the football team. We caught up with the star two-way player for the Dunham Tigers as he talked about his father, the game that stuck to him the most, his strengths, the team’s goals, and so much more in today’s recruiting spotlight.

Dunham RB Tony Huey (2)  had one of the best games of his career this year when he had over 300 yards and three touchdowns against East Feliciana. (Photo provided by Tony Huey)

LAFM: What are your stats and accomplishments throughout your football career?

LAFM: What are your stats for this year?

LAFM: Your dad passed away tragically from cancer in 2011 and you have dedicated your senior season to his memory. What has he taught you about the game of football and what was your relationship like with your dad?

My dad taught me a lot about the game. He was my coach until he died. He taught me to never give up and always be the hardest worker.  He was my hero, and he took great care of me and the whole neighborhood. He was like the dad of the city. Our relationship was very close. It was heart breaking when he passed away. I lost my everything.

I have one offer from Kentucky Christian University. I have picked up interested from UTSA, Arizona State, Southern Arkansas, ULM, and some others.

LAFM: You scored 26 touchdowns this year and have been very impressive this year. Do you feel like that you are underappreciated as a runningback compared to other running backs who get other notoriety?

I feel that I am highly unappreciated. I don’t get much recognition for the things I’ve accomplished this season so far. Some people would say because of my size, but that should not matter because my heart is as big as an elephant. I try to stay focus because I know God has a plan. I control what I can control.

LAFM: What are your strengths as a runningback?

My strengths are my visions, toughness, hard to bring down, and shiftiness. I am a very hard runner. I just try to run over anybody in my way, but I can also make a move on a defender.

LAFM: What are the things that you need to improve on?

I need to improve my speed. I want to be able to be the fastest guy on the field.

LAFM: The team started 7-0 but lost a key district game last week against Madison Prep. As one of the best players and leaders on the team, how do you keep your focus on the next couple of games in order to get ready for a playoff run?

We have put that tough lost behind us, and we know that these next couple weeks, your opponents will be trying their hardest to beat us. We also know that when we win out that we will host a first round play off game and that is big for us because Dunham has not accomplish that in 10 years. We can set ourselves up to a nice seeding in the playoffs.

RB Tony Huey gets a carry here against Madison Prep which resulted in the first loss of the season for the Tigers. (Photo provided by Tony Huey)

LAFM: If you had to compare yourself to a college or NFL runningback, who would it be and why?

Jonathan Stewart (current Carolina Panthers runningback). We are kind of built alike, and we are not tall backs but very quick and tough.

LAFM: You had some great games such as running over 300 yards against East Feliciana. If you didn’t look at the stats, what do you think was your best game ever in a Dunham uniform and why?

I think it would be the East Feliciana game. That was a homecoming game and I knew I had to do my part to help the team win. Something happened before that game, and It all just clicked.

LAFM: What do you like to do when the season is over?

I will take my talents right across the field to basketball practice. That’s another big season that I’m looking forward to.

LAFM: Who is the best defensive player that you faced and why?

Ken Jones (linebacker for Westminister Christian Academy). He was very physical and was a hard nose player going downhill. He will be a great college football player.

LAFM: What is your favorite play as a runningback?

My favorite play is the zone play we run. It’s a hard nose downhill run play, and I just follow my blocks and keep running

LAFM: Who are some of your teammates that you like to give a shoutout to?

LAFM: Who are some people in your life that you would like to thank?

I would like to thank my brother, who is like my mentor, the Duhon & Nicholos Family, Treylon Chatman, Lynell, Mrs. Joy, Derrius Guice, Nick B., and a lot more. Thank y’all for everything.

LAFM: What separates yourself from all the other running backs in the state?

I think my work ethic and hard separates me from other running backs. I work very hard everyday thing to find a way to get better. Nobody will outwork me.