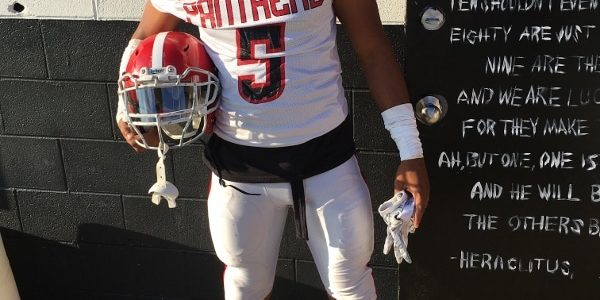 The Glen Oaks Panthers did not have a great season this year as the team went 1-9. It was a tough year for this football team, but it does not necessarily mean that the team has bad players on the team. Sometimes, there are those football players that are diamonds in the rough and don’t get any recognition even though, their team has a losing record. That football player,for the Panthers, is Stadford Anderson. Anderson plays running back for Glen Oaks and is definitely overlooked by a lot of people in the Baton Rouge area. Anderson can probably start for a lot of great high school programs in the state and has all the qualities that you want your star runnning back to have. Anderson has really mix of speed and power. Last season, Anderson had almost 1,500 yards rushing and 13 touchdowns on 157 carries as well as making the All-District team. This season, Anderson also had over 1,000 yards rushing and still, he is being under looked by colleges. As of right now, he has offers from two colleges in Houston-Baptist and Arkansas-Monticello. Louisiana Football Magazine Editor and T.V Host Lee Brecheen believes that the star football player for the Panthers could have had better stats if he played for a better team.

“I have seen Stadford play in a game a couple of times and he is very underrated,” Brecheen said. “Anderson has good speed and strength. If he played for a better team, Anderson probably could have ran for 2,000 yards this year.”

Anderson has that talent and he has put up some great numbers for a Glen Oaks team that does not necessarily have the biggest linemen. Imagine the stats he would put up if he was playing for a better team. Not only is he a great football player but he is a great teammate and leader as well and won’t quit on any team. Two weeks ago, Anderson made an appearance on our weekly T.V. show and talked about his skills as a running back. In today’s recruiting spotlight, we get to know the talented running back a little more as he talks about recruiting, this year, last year, the running back he compares himself to, and so much more!

LAFM: What is your ACT score and GPA score?

LAFM: What is your 40 yard time, max bench, max squat, and vertical?

LAFM: This season has not been the best season for the team as the team is 1-9. How do you still continue to fight each game and still lead the team after a lack of wins the last couple of seasons?

I continue to fight every week and lead the team after a lack of wins the last couple of seasons by first off being a leader at the school, and then making sure I’m on time for class daily and that I have all the materials needed. Then once it is time for football, I get to practice and do my best to set the tone in the weight room for everyone else to follow. From there, I will make sure we are giving max effort everyday at practice doing our jobs the correct way.

LAFM: You have a couple of offers from some colleges. What are some of the offers that you have received and is there any team that sticks out to you right now?

Houston Baptist and Arkansas-Monticello. As of now, I am waiting everything out and whenever I feel like I am comfortable with whatever school I feel is best for me, then I will commit.

LAFM: Even though the team has not won a lot of games, what are some of the moments when you will always look back when you are done with your high school career?

Even though we haven’t won many games throughout my high school career, I will never forget the game against Donaldsonville my junior year. Every thing was flowing for me. Every carry was a first down. My line gave their all for me that night. I ended up with four touchdowns that game. We still came up short in the end.

My strengths, as a running back, is my ability to go out of the backfield and catch passes, run routes, my vision, my acceleration to the next level, reading the flow of the linebackers to notice the cutbacks, and my top end speed to not get caught once I get in the open field.

LAFM: What are some areas that you need to improve on as a running back?

As a running back, I need to improve on being more reckless with my hands in terms of my stiff arms and when I’m blocking.

LAFM: Who is the running back that you try model your game after? Who is that player and why?

I model my game after Le’Veon Bell (former Michigan State and current Pittsburgh Steelers running back). I like how he can help his team in rushing and in passing as well. He can impact the game on catching routes out of the backfield. He has great vision and is very patient when he blocks.

LAFM: What other sports do you play besides football?

LAFM: What got you into playing football?

When I was in elementary school, I would always score touchdowns in recess and everyone would tell me that I needed to play football. I talked to my dad about it, and I began playing with the Warriors with Coach Ira Roberts.

LAFM: Do the coaches give you a nickname in practice? If so, what is it and how did you get your nickname?

They call me “Show” or “Mr. Showtime”. It came from Coach Blakes giving everyone nicknames at a basketball practice in 7th grade (I never had one). I’ve been called that ever since.

LAFM: What are some things that you look at when looking for a school to play for?

I look for a great relationship with the coaches, a loyal fan base, and a school that offers the best opportunity in my major that I will pursue.

LAFM: Who are some teammates that you like to give a shout out to?

Dontrell McQuarter and Nick Cobbs for coming off the basketball team to help me for my senior season. DJ (6’6, 170) had a great year at wide receiver and never complained at all about playing defensive end and gave 100% effort everyday. Nick Cobbs was a 2nd team punter and a great cornerback for us. He had three forced fumbles this year. Salute to y’all boys. I love y’all!

LAFM: Who was the best team that you have played against this year?

West Feliciana was the best team we played against this year. They had many returning players from the previous season, and they have great chemistry on the field.

Think about all the months of hard work I’ve been putting in for the moment. Get in my zone and then say a prayer.

LAFM: Is there anybody in your family that has played football? If so, who are they and what level?

LAFM: What do you want to tell the scouts that haven’t seen you play this year?

I am a great player on and off the field. I am very coachable, focused, level headed, and honest with myself. I am a team player that will do my part to the best of it no matter what it is.