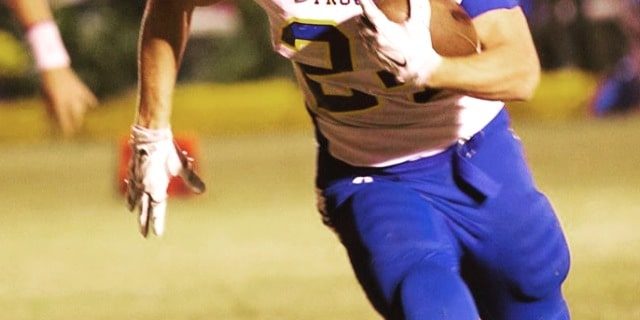 Usually, we cover high school football players from the LHSAA, but there are other great players that play in the MAIS league as well that are in Louisiana. The MAIS league is an eight man league that features teams that are both in Louisiana and Mississippi. These are smaller schools that don’t have the attendance to have 11 man rosters. Even though these teams don’t have 11 players on the field, there are still many quality teams and players in this league such as MAIS powerhouse Tallulah Academy and their star football player RB Ryan Hodge. Hodge has some mind blowing stats that would make any great running back  only wish that they can over their careers. Over his football career, Hodge has run for almost 7,000 yards and 113 touchdowns. One time, he ran for almost 500 yards and 9 touchdowns in one game! Eight man or 11 man, that is impressive. Hodge is one of the senior leaders on the team and has a lot of confidence in his abilities. He has not just had a successful career individually, but he is also on a team that is making their third state championship appearance. The Tallulah Academy Trojans won the state championship last year and made the championship game a year before that. Not many people can say that they have played for three state championships no matter what the classification is. The Trojans are lead by Head Coach Joe Coats who was a longtime coordinator at Neville High School. He has done a great job with the program and to have great coaches like Coats and great players like Ryan Hodge can make any team look great no matter how many players are on the football field. We caught up with the star Tallulah Academy running back as he talked about the MAIS league, his career, the championships, recruiting, and so much more in today’s  recruiting interview!

Tallulah RB Ryan Hodge is on his way for one of his 113 rushing touchdowns, and he still has one more game to play. (Photo provided by Ryan Hodge)

LAFM: You have some pretty impressive stats over your career. What are your accomplishments on the football field at Tallulah Academy over your high school career?

6,690 career rushing yards and 113 touchdowns with one game left

LAFM: For the readers that are not familiar with the MAIS, it is an eight team league. What is the major difference between playing eight man football and eleven man football besides the obvious fact that one has more players on the field?

8 man compared to 11 man is very similar if you can block and tackle in space, you can win if you can’t, then you are in a tough game.

LAFM: Tallulah Academy has been one of the most successful teams in the last couple of years in the MAIS league. The team has played for the state championship the last two years and the team is going to their third. What is it like to compete for state championships every year?

Competing for state has been great the last few years. It’s really become a standard, but our state days are numbered.

LAFM: What is the MAIS team that you look forward to playing the most and why?

The team I always look forward to playing is Sharky Issaquena. They beat us two years ago at state 82-42, and some wounds never heal.

The strengths to my game is my agility. I can maneuver very well in and out of traffic. I also play better when we are losing than when we are ahead.

Sometimes, I need to be more patient.

LAFM: Is there any running back that you watch on film on and model your game after?

Tavon Austin (former West Virginia wide receiver and current Los Angeles Rams wide receiver) is what I’d say. I also have been told that I look like Joseph Addai (former LSU, Indianapolis Colt, and Arizona Cardinal running back) , who would cut once and go full speed ahead, but I say I have the moves of Tavon Austin.

LAFM: Out of all the big time games you played in, which game sticks out to you the most?

In my junior year, I had 458 rushing yards and 9 touchdowns. I just went off.

LAFM: Are there any teammates that you like to give a shout out to?

The teammate that I like to give a shout out to is Joshua Collins. He is just a talented athlete. If anyone can beat my school record, I believe it will be him.

LAFM: Coach Joe Coats has been involved with coaching in Louisiana for a long time. What is it like to be coached by a Louisiana coaching legend?

The time frame that we got him is something that I am very thankful for. He is a very wise coach and is always calm and collected in the big moments of every game.

LAFM: Is there anybody in your family that has played football at any level? If so, who is it and where did he play?

LAFM: What is your favorite play as a running back?

My favorite play is anywhere I can get the ball or can get a pancake block.

LAFM: Do you have any offers or have received any interests from colleges to play football?

Millsaps has been talking to me as well as Mississippi College and Delta State. Both have invited me to come visit.

LAFM: What do you want to say to all the college coaches and scouts reading this article?

Don’t be afraid to take a chance on me because I work harder than anybody they got.

Look at my options where I could play and then, make a decision.

LAFM: If you have to make the transition to 11 man football, is it going to be a tough adjustment for you especially in college?

It will be easy. We played a 11 man game this year and I had the most touchdowns in that game than the eight man games I’ve played.

LAFM: If you had to promote the league to regular football fans, what would you say to them to come watch a MAIS game?

The MAIS is a great, clean league. If I have to say a game to watch, it would be Jackson Prep and Jackson Academy. They are in the biggest division and it is a great rivalry.