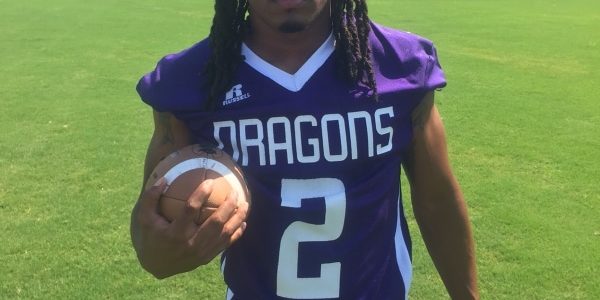 Mangham RB Jakarie Nichols is one of the most successful running backs in terms of awards, championship appearances, and wins in the state along with Kinder runningback Taylor Johnson, whom we did an earlier article on. Nichols has been a part of the Mangham football powerhouse which has gone to the Dome three straight years.  Even though the Dragons didn’t win one during that span, that is still an impressive stat and not many kids can say that they have been a part of something like that. Last year, Nichols made All-State and had amazing stats. Over his high school career, he has rushed for 4,558 yards and 61 touchdowns while averaging almost nine yards a carry. Nichols is close to the school’s rushing record and is something that he also wants to accomplish for this season.  Nichols is a playmaker and one of the main key factors that can send the Demons to the Dome for the fourth straight year under Head Coach Tommy Tharp. This year, the Dragons are off to another great start at 4-1 and are looking towards their goal of ending their streak of losing state championships. With Nichols, the Dragons have a great chance of ending that streak. He is a playmaker and even though he is not the biggest player out there at 5-8, 173 lbs, he sure doesn’t lack toughness and effort when he runs the football. Louisiana Football Magazine Editor and T.V. Host Lee Brecheen believes that he is a playmaker and could  be a special player in the future.

Jakarie Nichols (2) getting ready to warm up in one of his state championship game appearances except that this year, he is hoping for a different result. (Photo provided by Jakarie Nichols)

“Jakarie Nichols was named All-State last year and ran for over 1,800 yards and 30 touchdowns,” Brecheen said. “He is the type of player that can give his team a chance to win every week. He is a really good runner and can play either runningback or slot receiver in college.”

Check out today’s article on one of the best runningbacks in the state as he talks about his Mangham football career, this year, recruiting, and so much more in today’s recruiting interview!

LAFM: What is your name, age, position, and team you play for?

My name is Jakarie Nichols. I am 18 years old and I play runningback for Mangham High School.

LAFM: What is your ACT and GPA?

LAFM: What is your 40 yard dash, max bench press, vertical, and max squat?

LAFM: Jakarie, you are really fast and have a lot of speed. Do you ever consider playing slot receiver or a kick return specialist or do you want to stay at runningback?

In college, I consider playing receiver, kick return, punt return and any other position that could benefit the team.

LAFM: You have been a part of three state championship games but you have lost all of them. What is the experience like playing in the Superdome in big time games even with the disappointing losses?

Not succeeding in the Dome was hard. All those losses were disappointing but each year, I learned and was able to become mentally and physically stronger. If I’m able to make it to the dome again this year, I know everything I have to do in order to have a good chance of winning a state championship due to those previous downfalls.

LAFM: If Mangham goes to another state championship you would have played in four straight championship games, what would it mean for you to play in the Dome every year?

Making it to the Dome this year will be my fourth year playing in the state championship and would mean not only a lot to me and my school but also my community.

LAFM: Do you have any offers from any colleges? If so, who are they? If not, have you received any interests from colleges?

I have received offers from Louisiana College, Mississippi College, and a few other schools have been interested in me.

LAFM: What are some things that you look for in searching for the college you want to play for?

I look forward to a full scholarship, a good education, and a great atmosphere.

LAFM: What is your favorite team to play against and why?

My favorite team to play against is Sterlington High School

Jakarie Nichols is not the biggest guy but it makes the defense’s job much tougher when he gets lost behind his offensive line. (Photo provided by Jakarie Nichols)

because they always put up a good fight and key in on me.

LAFM: Of all the games in the Dome, which one sticks out to you the most?

The game that sticks out to me the most, in my years of playing in the Dome, was my sophomore year when we got beat by a team that was, in my opinion, not better than us.

My goals for this season are to take my team as far as possible and to try and break the rushing record at Mangham High School.

LAFM: Let’s talk about this year. The team is 4-1. What have been the keys to the very good start?

The key to having a good start for this season was hard work throughout the summer, having good practices, and good listening skills to my coaches so you are able to be put in a position to win and play a good football game.

LAFM: If there is a college or NFL player that you had to compare your playing style, who would it be and why?

If I had to compare myself to any NFL runningback, it would have to be Jamaal Charles (former Texas runningback and current All-Pro runningback for the Kansas City Chiefs) because he is an all purpose runningback who can run and receive passes.

LAFM: Is there anybody that you want to give thanks for putting you in position that you are in today?

First off, I’d like to give thanks to God and my family for believing in me and allowing me to play the game I love, my coaches for helping me throughout my journey, and my teammates for standing behind me in everything I do.

LAFM: Any teammates that you want to give a shout out to?

I would like to give a shout out to my QB Chris Fleming, my offensive line, and to Tyler Haynes, who reminds me a lot of myself when I was a freshman.

The strengths to my game are my physical and mental strength, quick feet, and speed. I not only can play runningback but I can also play wide receiver along with many other positions.

Although I may seem strong and fast, there’s always room for improvement in my eyes.

LAFM: What separates you from all the other runningbacks in the state?

Unlike many runningbacks in the state, I feel I am more mentally and emotionally attached to the game. I feel as if I have a mindset similar to that of Michael Jordan (legendary basketball player for the Chicago Bulls) and that is to simply win.