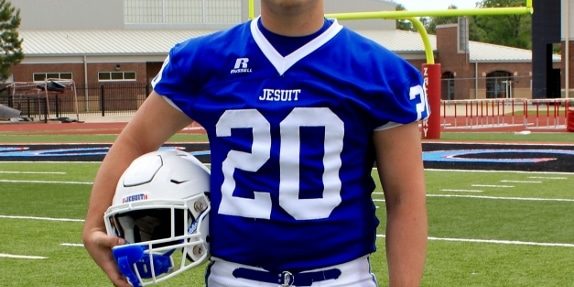 Jesuit RB Connor Prouet is one of the best running backs in the state. He does not get the recognition that some other great running backs in this state get, but he is just as good. Prouet also has one of the best offensive line groups blocking for him, but that makes him even more dangerous as a runner. At 6’0, 215, Prouet is a tough runner who will run over defenders and break tackles to get some extra yards. Prouet also has the speed to go into the open field and outrun defenders. He is indeed a tough runner and it is very hard to bring him down. This is a guy that had run for over 1,000 yards and 16 touchdowns in his junior year, has scored six touchdowns in one game, has been a state champion, and was named player of the week multiple times according to Nola.com. Prouet was also named to our 1st team All-Louisiana team in the preseason. Louisiana Football Magazine Editor and T.V. Host Lee Brecheen truly believes that the star senior running back is being overlooked for colleges.

“Connor Prouet is the toughest running back in the state,” Brecheen said. “With the right team, he can really do well because of his power and determination.”

Not to also mention that his only offer has come from Harvard. That shows what kind of student athlete he is. He can get the job done off the field as well as off the field. Check out today’s recruiting interview on one of the most undervalued players in the state in Connor Prouet as he talks about his Jesuit high school career, his six touchdown game, his offensive line, recruiting, Harvard, the reason that he wears the number 20 jersey, and so much more!

Jesuit RB Connor Prouet bounces to the outside for a big gain. (Photo taken by Greg Livaudais)

Harvard. I am very underrated so I don’t have many offers.

LAFM: What are your career accomplishments as a football player?

LAFM: You were named to our 1st team All Louisiana team this year. What does it mean for you to be recognized as one of the best players in a state that is full of great football players?

It’s a great honor, and I’m truly blessed to be named  apart of such a great selection of players.

LAFM: You probably had one of the best offensive line groups in the state. Give a shout out to those guys and what made them so good as a group?

My o linemen, including Corey Dublin, were so great because they always communicated and just one of the strongest group of guys that I’ve ever met. They had great chemistry

LAFM: The team lost the first round of the playoffs this year against rival Archbishop Rummel. How tough was it to end your great prep career with a first round loss?

It was very hard to end my prep career so soon because of the amount of work we put in week in and week out, but we lost to a great opponent and we played our hearts out. I wouldn’t want to trade my team for anyone else.

LAFM: You play in a very tough district in the Catholic league with a lot of great teams. Which team was your favorite to go up against and why?

My favorite team to go up against was Holy Cross because of the amazing rivalry and the physical play of that game.

In pregame, we go to team mass and then pregame routine, we usually dress/tape while listening to music. Then, I pray for about 10 minutes on a knee outside, and then we say a prayer as a team, get on the bus, and go ball out.

LAFM: This season, you accounted for six touchdowns in a win against Franklinton this year. Was that your most favorite performance of your prep career? If not, what is it?

That was my favorite performance of my career because of our team just coming together and having everything that we tried to run work.

LAFM: Who is the running back that you like to model your game after whether it be in college or professional?

Barry Sanders (Heisman Trophy winning running back for Oklahoma State and NFL Hall of Fame running back with the Detroit Lions), which is why  I wear #20. The man was a beast, and I love what he did on and off the field.

I want to be a doctor and go into neurology or orthopedic surgery.

Connor Prouet is not only a north-south runner but he also can run laterally as well. (Photo taken by Pierre)

I am a very physical runner that never gets brought down by the first tackler. It usually takes multiple guys, but don’t let my size fool you because I have speed that can burn you and I can make you miss in space as well.

LAFM: What are areas to your game that you need to improve on?

I sometimes spend too much time watching film and preparing that I fail to give my time to anything else in my life so I need to get better at balancing that.

LAFM: Have you given any advice to the juniors on how to lead the team next year? Who are some players that you expect to be big time playmakers for the Blue Jays next year?

I talked to the entire junior offense as a whole, and I think they are definitely going to be great leaders. With all of the seniors graduating, there are a lot of spots to fill so it’s hard to pinpoint one person, but there is an opportunity for a lot of people to step up.

LAFM: Are there any family members that have played football at any level? If so, who are they and where did they play?

My dad played wide receiver for Jesuit and my uncle played quarterback for McNeese.

I would like to thank my parents for always bringing me to my training, supporting me, motivating me, and also all of my coaches that I have ever had for coaching me up on all the aspects of my game.

LAFM: What separates you from any other running back in the state?

I never give up, and nobody has the work ethic and determination that I have. I just want it more than anyone else.