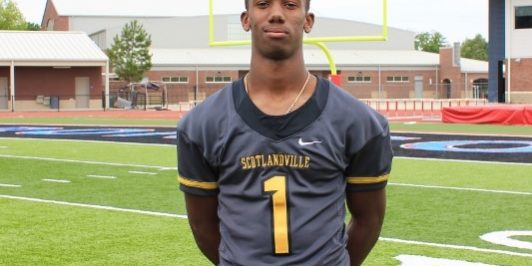 One of the best athletes in all of Louisiana is Scotlandville quarterback Levi Lewis. Lewis was under the shadow of a lot of people last year even in his own district because Scotlandville’s rival Zachary had a great athlete at quarterback them self in Lindsey Scott. Since Scott is now at LSU, it is Lewis’s turn to establish himself as one of the best quarterbacks in the entire state. Last year, Lewis really broke out in his second year as a starter and accounted for over 3,000 yards and 30 touchdowns. As a team, the Hornets won 10 games and made the playoffs but lost to Mandeville 42-41 in the second round of the playoffs last year under Coach Robert Valdez. Now, under Coach LeVanta Davis, the Hornets are currently undefeated at 5-0 and are a big threat to challenge for a state championship especially with a senior dual threat quarterback in Levi Lewis. What makes Lewis special is that he can make a play when it is broken and make something out of nothing. He is very slippery and not easy to tackle in open space. Oh, and he also has a good arm as well. As of right now, Lewis is committed to play for the Ragin’ Cajuns. We will see if the Ragin’ Cajuns will keep him because if they do, the team definitely has a playmaker that they can get the football to. Louisiana Football Magazine Editor and T.V. Host Lee Brecheen truly believes that Lewis is a special athlete and can play many different positions.

“Lewis is the best athlete in the state as a senior for college and could play QB depending on who signs him,” Brecheen said. “He does run a legit 4.4/40 and not many do. When it comes to running the ball in space, he is one of the best that I’ve ever seen.”

A quarterback like Lewis ,who can run a 4.4/40 and has big time playmaking ability, can be a very special player at the next level for whoever picks him up and could be this year’s version of Lindsey Scott in terms of District MVP in the always tough 4-5A district. Scotlandville has their man and could maybe lead them to the Dome in December. Check out today’s article on the star Scotlandville quarterback as he talks about the Ragin’ Cajuns, his teammates, last year’s heartbreaking finish, the great start to the season, and so much more in today’s recruiting interview!

Scotlandville QB Levi Lewis does what he does best and that is use his legs in this playoff game against Thibodaux High School two years ago. (Photo provided by Levi Lewis)

LAFM: Louisiana Football Magazine editor Lee Brecheen believes that you can play all kinds of positions such as quarterback, wide receiver, or maybe cornerback. Are the Ragin’ Cajuns recruiting you as a quarterback or for another position?

They are recruiting me to play quarterback.

LAFM: You made it on our 1st team All-Louisiana team as an athlete. What does it mean for you to be recognized as one of the best athletes in a state that is loaded with great football players?

Its means the world to me and a blessing to be apart of such a great program.

LAFM: Last year, Scotlandville went 10-2 and lost by one point to Mandeville in a great playoff game. How disappointing was it to lose a game like that in the playoffs after a great regular season?

It was very disappointing when games slip out of your hand when you make and look at the simple mistakes that could be easily fixed.

LAFM: Coach Valdez left to be head coach for St. James. This year, the team has a new head coach in LeVanta Davis. How has the team adjusted to the coaching change?

There was no difference or any adjustments in what the Hornets Way is because Coach Davis was always with us.

LAFM: The fact that you played for under two coaches, what is the difference between the two?

No difference in my eyes.

It is staying focus and doing our best.

LAFM: What is the team that you are looking to play the most and why?

every team that’s on the schedule

LAFM: What are your individual goals?’

LAFM: What are the team’s goals?

Preparation for each practice, work together effectively, and playing discipline

My strengths are mainly overcoming adversity and leading my team.

LAFM: What are some aspects to your game that you are still trying to improve on?

Playing mistake free, my foot work, reading things a lot quicker and playing fundamentally sound are some things that I need to improve on.

LAFM: Do you want to give a shoutout to some of your teammates?

LAFM: Who are some people in your life that you like to give a shoutout to?

There is so many that I don’t want to miss anyone.

LAFM: What separates yourself from any other quarterback in the state?

Leading, Being Juice/myself, and never settling for less.