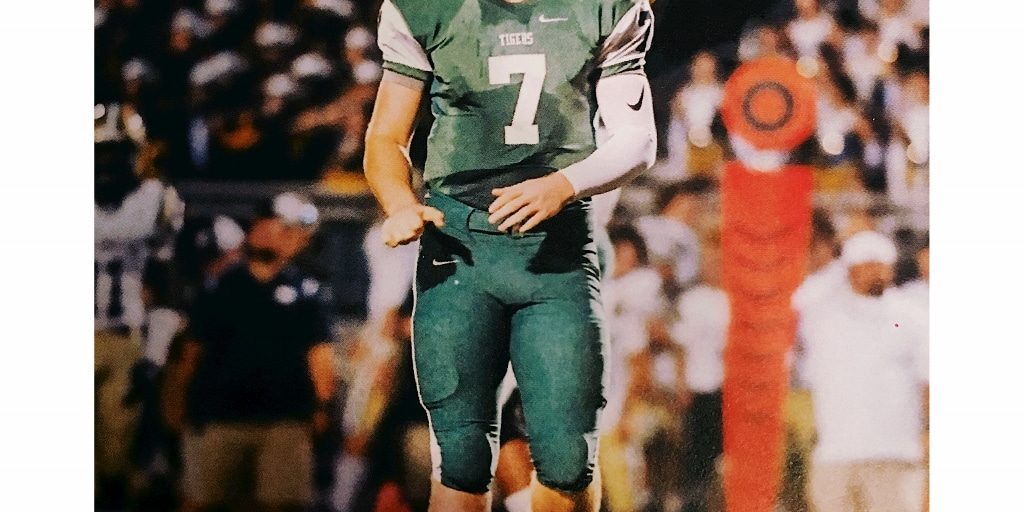 Slidell QB Wayne Griffin had himself one of the best single seasons in the state this year. Griffin was the top leading passer in the state at the end of the regular season in regards to passing yards with over 2,600 passing yards and over 20 touchdown passes. The Tigers had a great 1-2 punch in the passing game with Griffin throwing the ball to 6’4 wide receiver Terry Baham. The combination of Griffin and Baham helped lead the Tigers to a playoff berth this year. Rarely, there are quarterbacks that have been part of a program for four years. Griffin has started for the Slidell varsity football program since his freshman year. Even though the team had more losses than wins this year, it was the play of Griffin that has kept them in their games. He is not the biggest quarterback but he is very athletic, has a really good arm, and most importantly plays his best in the clutch. In a very important game in the season against Fontainebleau, Wayne Griffin threw for over 400 yards and four touchdowns to keep the Tigers alive in the playoffs. Louisiana Football Magazine Editor and T.V. Host Lee Brecheen had this to say about the athletic and strong armed Slidell senior quarterback when he was selected to our 2nd team All-Louisiana team at the beginning of the season.

“Wayne Griffin is a big time quarterback,” Brecheen said. “He has great feet, an SEC arm, and can really throw the football.”

As of right now, Griffin has committed to play for Louisiana College in Pineville. It will be interesting to see what he will achieve for the Wildcats in the near future. Louisiana Football Magazine’s very own Alex Martin caught up with Wayne to talk about his high school career, the quarterback he models his game after, Louisiana College, and much more in today’s recruiting spotlight!

Slidell QB Wayne Griffin uses his athletic ability to get out of trouble. (Photo courtesy of Brian Smith)

LAFM: What are your stats and accomplishments throughout your high school career?

I am committed to Louisiana College.

LAFM: What are some things that you look at when you look at colleges to play for at the next level?

I look at what kind of offense they run, how often they throw the ball, and if they will be able to use my talents to the best of their ability.

My ability to extend plays, my deep ball, and recognizing defensive coverage are my strengths as a quarterback.

Not only does Slidell QB Wayne Griffin have a good arm but also can scramble around and keep plays alive. (Photo courtesy of Brian Smith)

Intermediate passing and quickness are some things that I need to improve on.

LAFM: Who was the best defensive player that you played against?

Brad Stewart (defensive back for McDonogh 35)

Pray and listen to slow music to help me stay calm.

LAFM: What was your best game at Slidell High School and why?

My game against Foutainebleau I threw for 422 yards and 4 TDs. It kept us in the playoff picture.

LAFM: Who is a college or NFL quarterback that you model your game after and why that person?

Aaron Rodgers (MVP quarterback for the Green Bay Packers) because he is one of the clutches players ever and he plays calm and confident.

LAFM: What advice do you want to give to next year’s Slidell High School team?

Leave it out all on the field, practice, train as hard as you can, and don’t ever look back.

LAFM: What is your favorite go to meal before a game?

I do not have one.

LAFM: Who is your favorite music artist that you listen to before every game?

Either Ne-Yo or Usher

LAFM: Is there anybody in your family that played high school, college, or even in the NFL?

LAFM: Why would a college football coach want you on their football team?

A college football coach would want me because of my work ethic and leadership. I can also change a game.

LAFM: Who are some people that you want to give a shout out to for putting you in the position that you are in today?

I want to thank my old trainer Coach Kerry Joseph, who is currently coaching at McNeese, my Head Coach Larry Farve for being a father figure in my life, all my position coaches for crafting me into the payer I am and showing me the fun side of football. Lastly, I want to thank my parents and family for supporting me in everything that I do and always being by my side.