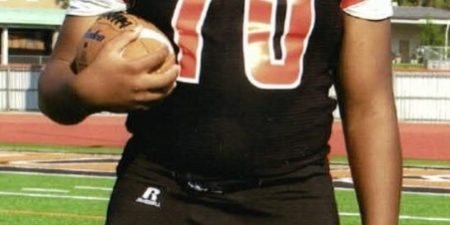 Catholic OT Zach Tom is a soft spoken young man that lets his playing do the talking. At 6’4, 275, Tom has the size and the athleticism to play at tackle. He also has the ability to play at any position whether it is at guard or tackle. Not only does he have those skills, but he is also a student of the game and is very knowledgeable. In the classroom, he is just as good as he made a 31 on his ACT and has a 3.8 GPA. Tom is the younger brother of Cameron Tom, who was also a great offensive lineman at Catholic High and is now capping off a great collegiate career at Southern Mississippi where he was named 1st Team All-Conference USA twice. Unlike his brother, who went to Southern Miss, Zach Tom is forming his own path and will attend Wake Forest to pursue his football career. According to Louisiana Football Magazine Editor and T.V. Host Lee Brecheen, Zach Tom can go on to not only match the success of his older brother, but exceed it.

“I think Zach Tom has a chance to be even better than his brother, who did great at Southern Mississippi and will have a chance at a NFL career,” Brecheen said. “Tom is strong, smart, and has great feet.  This kid will have a chance to play early and be All Conference by his sophomore year. I would not be shocked if he played as a true freshman.”

That is a lot of high praise for this young man, but Zach Tom is more than capable of reaching those high expectations. We caught up with the man of few words as he talked about his great high school career playing for the Bears, winning the first state championship for Catholic High, playing in Coach Weiner’s last season as Catholic High Head Coach, committing to Wake Forest, and so much more in today’s recruiting interview!

Catholic OT Zach Tom has the versatility to play everywhere on the offensive line but made his living as a Bear at offensive tackle. (Photo courtesy of the Tom family)

LAFM: What are your accomplishments while at Catholic High?

LAFM: You committed to play for Wake Forest over Southern Mississippi in which your brother has had a good football career at. What made you choose the Demon Deacons over the Golden Eagles?

I felt that Wake Forest was a better fit for me.

I have really good balance.

LAFM: What are some things that you are trying to improve on?

I need to do a better job on finishing blocks.

LAFM: Let’s talk about your Catholic High career. You were part of that state championship team in 2015. What is it like playing for a team that has captured a state championship for the first time in the program’s decorated history?

It was fantastic to be a part of the first football state championship team at Catholic High.

LAFM: What was the turning point in that season?

The turning point of that season, in my opinion, is when we beat St. Thomas More.

LAFM: It looked like the team was on its way for back to back state championships after a perfect regular season. How disappointing was it to lose in the playoffs earlier than expected to end your high school career?

It was tough. I wish I could have gone out on a better note.

LAFM: You were part of Coach Weiner’s last season as head coach at Catholic High. What are some things that you have picked up from Coach Weiner that has helped you today?

The main thing that I learned from Coach Weiner is to persevere through tough times.

LAFM: What do you do when football season is over?

I participate in track, and I workout.

LAFM: You are a pretty intelligent guy. What is your intended major for college?

I model my game after Laremy Tunsil (former Ole Miss OT currently with the Miami Dolphins).

LAFM: You were named to our 1st All-Louisiana team at the beginning of the season. What was your reaction when you heard that you were recognized as one of the best players in the state at your position?

I was honored to be recognized as a top player at my position.

LAFM: Is there anybody in your family besides your brother that has played high school, college, or even in the NFL?

There is nobody besides my brother that has played at any level.

I want to thank my parents as well as my coaches.

LAFM: What is the best part about playing high school football in Louisiana?

It is competitive, and there is a lot of talent.

LAFM: What is some advice that you like to give for next year’s Catholic High football team with a new head coach in Gabriel Fertitta?

My advice, to them, is to stick together, focus, and trust the coaches.