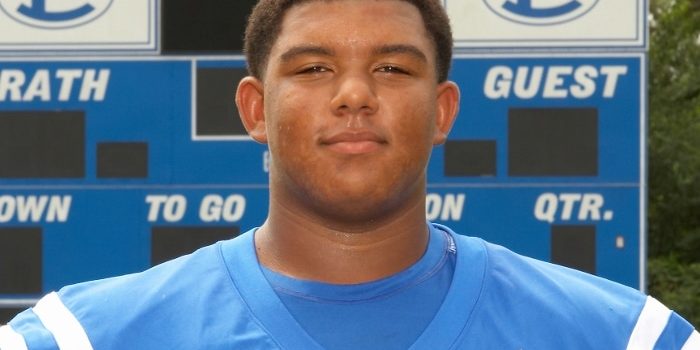 Erath High School had a very good season this year.  The team went 8-4 overall and made the second round of the playoffs where they lost to a very talented West Feliciana team. A lot of the team’s success had to do with the team’s running game. Erath running back and Louisiana Lafayette commit Elijah Mitchell ran for almost 3,000 yards and 40 touchdowns. Even though Mitchell is a fantastic running back, he could not do it without his offensive line especially Senior OT Steven Vallot. At 6’3, 300 lbs., Vallot is a force on the offensive line for the Bobcats. A lot of their many successful running plays have come to his side of the offensive line. Not only is he big and athletic, but he is also aggressive and quick off the football. Vallot also helps his team by playing on both the offensive and defensive line. Off the field, Steven Vallot is a calm and collected guy and very laid back. On the field, he is looking to run over anybody that is in his way. Louisiana Football Magazine Editor and T.V. Host Lee Brecheen had this to say about the big offensive lineman from Erath.

“Steven Vallot is tough, quick, and powerful,” Brecheen said. “If Steven was 6-4,  he would be going to a SEC School. I think he is a big time sleeper for I-AA and could fit to play D-I for the right school.”

Whenever the Bobcats had to rely on their bread and butter, Steven Vallot and the rest of the offensive line delivered. We caught up with the senior offensive lineman as he talks about his high school career, recruiting, the player he models his game after, hobbies, and so much more in today’s recruiting interview!

Erath OT Steven Vallot is a big guy but is very quick and athletic as well. (Photo courtesy of Missy Rosa)

LAFM: What is your name, age, position, and school you play for?
Steven Casey Vallot , age 17, position OT, DT.

First team All District, First Team All Parish Sr. year, and Best of the Teche

Run blocking and up field blocking are my strengths as an offensive lineman.

LAFM: What are some things that you are trying to improve on?

Keeping thumbs up when pass blocking is something that I need to improve on.

LAFM: You are very aggressive on the football field but really laid back off the field. Where do you get your aggressive nature on the field from?

Look at a person blocking as getting a scholarship. There is a job that needs to be done, and I know what it takes to get it done.

LAFM: Your running back Elijah Mitchell had a great season rushing for almost 3,000 yards and 42 TDs. How does that make you feel as an offensive lineman to say that you helped Elijah achieve an accomplishment like that?

I am happy for Elijah, and I am proud to be a part of his accomplishments, I just wish more college coaches would recognize the talent in the OL in front of him.

LAFM: You also throw over 50 feet in shotput. Have you ever thought of throwing the shot put in college?

Yes , I have definitely considered it.

LAFM: Who is the college or NFL football player that you model your game after and why?

Aaron Donald (former Pittsburgh Panther and current Los Angeles Rams DT). The reason why I chose him is because he likes to play a huge factor in his game.

LAFM: Talk about the season. The team had an 8-4 season and defeated Eunice in the playoffs which is really hard to do. Even though the team did not go to the championship, what are your thoughts on your senior season as a whole?

It was exciting, but it was also a reflection of the work that we put in during the off-season.

LAFM: What is your pregame routine before kickoff?

Stretching, warming up, and praying is what I do before every game.

LAFM: What is the game that you will remember playing the most while at Erath and why?

Franklin High School. Even though I play offense majority of the time, I was able to get in on defense and rack up three sacks, seven tackles and also caused a fumble.

Erath OT Steven Vallot goes in his stance before a play. (Photo courtesy of Missy Rosa)

LAFM: What is some advice that you would like to give to next year’s team?

Play every game like its the last, and always do your best.

I never had a desire to play football at a young age not even as a freshman, but when I started my sophomore year, I realized what I could do on the field. That’s when I found out that I really enjoyed the game and the competition.

LAFM: Who are some people that you would like to give a shout out to for putting you in the position that you are in today?

I want to give a shout out to my parents, my brothers, and my uncle.

LAFM: Why should college coaches invest in you to become part of their program?

I always want to be better than the guy in front of me. I am a team player, and I work hard to achieve my goals at getting better and better.