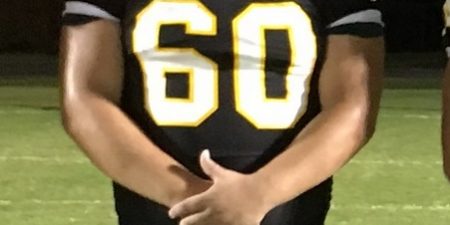 Holy Savior Menard Central High School is off to a great start this year as the Eagles are 4-0 and are looking for one of their best years in recent memory with their Head Coach Joel Desselle leading the way. The Eagles have great senior leadership in guys like star linebacker Sean Badeaux, who we did an earlier article on, and versatile lineman William Bordelon. Bordelon leads an experienced offensive line which has a lot of guys that are either seniors or have gotten a lot of playing time. Bordelon is one of those guys that plays on both sides of the football at offensive and defensive line. Not only does he play on both lines but Bordelon shows that he is not just a big guy at 6-3, 305 but is a nimble quick guy who also plays fullback at times. Last year, Sean Badeaux had himself over 150 tackles and got a lot of the credit as he should but it is the defensive line that does the dirty work in order to get those linebackers to the next level and make tackles. William Bordelon is one of those key guys that helped Badeaux make all those tackles. Bordelon, along with his offensive lineman buddies, help make the offensive so explosive. Bordelon does a lot of the dirty work but he doesn’t mind at all. He is very humble and just loves playing for his high school and with his teammates.  In the first four games, the Eagles have scored at least 35 points in every game. Without the offensive line, the Eagles would not have the success that they had in the last couple of games. Louisiana Football Magazine T.V. Host and Editor Lee Brecheen believes that William Bordelon is one of the biggest sleepers out there in the Alexandria area.

“William Bordelon is a huge sleeper and can play either offensive guard or center at the next level,” Brecheen said. “He plays both ways and has also played some fullback at times. He is a good, tough football player.”

Today, we caught up with the talented William Bordelon from Holy Savior Menard as he talks about the early season start, last season, playing fullback, his thoughts on the offensive line’s play, and so much more in today’s recruiting interview!

This is the starting offensive line for the Eagles which has gotten off to a great season this year. From left to right, left tackle Drake Carroll (69), left guard William Bordelon (60), center Cody Saucier (54), right guard Cortland Smith (66), right tackle Austin Irons (72), and offensive tackle Jacques Roy (64) (Photo provided by Will Bordelon).

LAFM: Do you have any offers from any colleges? If so, what are they? If not, have you received any interests from colleges?

No, I have not had any offers from any colleges. Some have shown interest.

LAFM: Last year, the team went 7-4 and made the playoffs. The team is off to another great start this year at 4-0. What are the team’s goals for this year?

The team goal for this year is to continually get better throughout the season and make it the state championship game.

My individual goals for this season is to make All-State, help bring my team to a state championship, and to hopefully leave a foundation in our football program that will bring successful seasons in the years to come.

I would give us a B because we have been dominating up front but have not played up to our full potential.

LAFM: Do you want to give a shoutout to all the offensive linemen that are starting?

Yes. I would love to give a shout out to my line Cortland Smith our left guard, Austin Irons our left Tackle, Drake Carroll, and our Freshman Center Cody Saucier. They are my teammate and also my best friends. We are very close.

LAFM: I believe you play a little fullback as well. How did that happen?

Coach saw how quick I was and how well my footwork was so he decided to make a special package where I was put as a glorified lineman that could also run the ball.

LAFM: Did you score a touchdown before as a fullback? 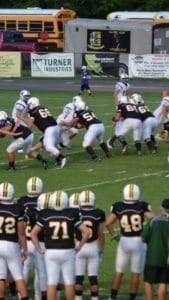 The offensive line pushing defenders back like they have been all year. (Photo provided by William Bordelon)

LAFM: You played both center and on the defensive line. Which position do you rather play in college and why?

I have moved positions to right guard with the addition of our amazing Center Cody Saucier but it has always been my dream to play defensive line at the next level.

LAFM: You play against one of the best linebackers in the state during practice in Sean Badeaux. What is it like playing against a guy like that during practice every day?

It is amazing to play against him everyday. It makes me such a better offensive lineman having to block such a talented linebacker.

LAFM: What is the team that you are looking forward to play this season?

Many and Tioga are two teams that I am looking forward to playing. They both have such talent on their team and it should be a real test on how good we actually are as a team.

I am a very aggressive defender because I am very physical with my hands and as an offensive lineman, I do not like to just get in the way of a defender. I enjoy making giant holes for my fantastic running back Landon Barone.

LAFM: What do you need to improve on?

I need to work on blocking in the second level. It is harder for me to block players that are a large amount faster than me.

LAFM: Is there anybody in your family that has played high school, college, or even pro football? If so, who are they, where did they play, and what position?

My Dad played one year in high school.

I first need to thank my mom. She is my cheerleader and she has given up everything to get me where I am today. I want to thank all my coaches from all the way back to peewee football. My older brother Mathew, who has been my role model, and is someone who I have always looked up to. He does not play football, but I always try to show him how great I can be and that has pushed me to be in the position that I am in.

I am a dominating presence on the football field and being that I go to a small school, I play both sides of the ball which makes it all that more difficult to play at a high level. I am a leader and one of my favorite things about football is the brotherhood. I enjoy giving my all for the team sake not for my own stats or praise.