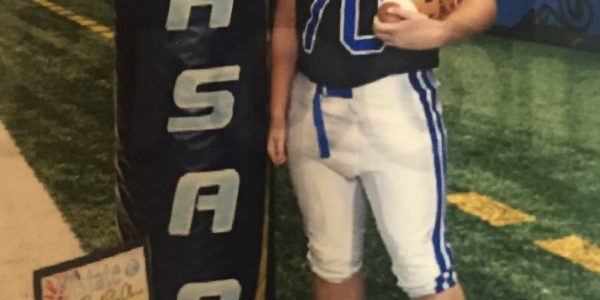 St. Mary’s High School in Natchitoches, Louisiana is not one of the biggest football programs in the state, but they had some great seasons in the past such as making the state championship two years ago. Since it is not one of the biggest teams and that this is a 1A football team, a lot of players have to play on both sides of the football. One of these guys that have to serve that role is OL/DL Behrend Behrendsen. Behrendsen was one of the tough leaders for the Tigers. What they say is that the game is won at the line of scrimmage and at 6’3, 280 pounds, Behrendsen anchors both lines of scrimmage and sets the tone. He is one of those players that is unselfish and does whatever it takes to help his football team out. He is smart and can adjust to the game as it goes. Some coach is going to want a guy like Behrend Behrendsen on their football team and that is somebody who is mentally and physically tough. Louisiana Football Magazine Editor and T.V. Host Lee Brecheen had this to say about the talented lineman from St. Mary’s.

“Sometimes colleges make mistakes by not actually going to high school games to scout linemen in 1A or 2A football,” Brecheen said. “I did see this kid play in person in 2015 and came away impressed with his toughness, strength, quickness, and high effort. I think with the right D-I school, he could get on the field, in two years, because of his effort and football ability.

As of right now, big I-A programs such as Northwestern State and Louisiana Tech have shown interest in Behrend Behrendsen, but he is still looking at his options on where he wants to continue his football career. In today’s recruiting spotlight article, the longtime starter for the St. Mary’s Tigers reflects on his high school career, recruiting, and so much more!

St. Mary’s OL/DL Behrend Behrendsen gets a little break on the sidelines cheering his teammates on. (Photo courtesy of Gunner Behrendsen)

LAFM: What are your stats and accomplishments while playing at St. Mary’s High School?

I have no stats, but I was Honorable Mention my sophomore year, second team All-District my junior and senior year. I was also a part of the 2014 and 2015 district champions, 2013 quarter finalists, 2014 semi finalists, and 2015 state finalists.

Northwestern State University and Louisiana Tech in that order.

I am looking at if they have the degree that I am going into. I am also looking at an environment that will expand my social circles to make connections that I can rely on in the future.

LAFM: You play on both sides of the football. Which position do you want to play in college?

I want to play on the offensive line when I am in college.

I am an encouraging player. I always try to push those around me to do better and work harder. I will use my voice to cheer everyone on when I am not on the field. I hate losing, and it drives me to be better. I am willing to listen to my coaches and make adjustments according to their suggestions. I am very technical and have quick feet. I play with power and hit hard.

I find that I overthink plays when we have in-game adjustments. I can be cautious at times on the line.

LAFM: Two years ago, the team made the state championship game but lost to a very talented Southern Lab football team. What was that experience like for you even though the game didn’t end in the result that you wanted to?

When we played in the state championship game and lost to Southern Lab, it really hurt. We had an amazing season and fought 100% every game. Like I said, when we lost, it hurt, but it pushed me even harder for the next season. It was an amazing experience playing in the Super Dome. It gave me a feeling of pride that I was able to help my team reach that point.

LAFM: This season, the team lost to St. Frederick in the first round of the playoffs. What are your thoughts on the season as a whole?

I am glad that we had ended with a winning season. We had to overcome several setbacks throughout the season, but we kept working at it despite all our injuries.

LAFM: What do you do during the off-season?

I am a certified lifeguard and volunteer at the local Boys and Girls Club. I spend most of my free time in the gym working hard to improve on myself. I also like to work on computers in my off time as well.
LAFM: What was your best game while at St. Mary’s high School and why?
The best game of my high school career was our semi-final game against Ascension Episcopal my junior year. It was a fight to the finish. We were close the whole game. Each side was fighting for the lead. We had to dig deep to beat them, and it truly was a game to remember.
LAFM: Who was the best offensive or defensive lineman you faced and why?
The best defensive lineman that I have ever faced was my own teammate Josh Lucky. He made me better by going hard every day.
LAFM: What is your dream school to play for?
My dream school, to play for, is Notre Dame. I am a faithful man, and I would be at home there.
LAFM: Is there anybody in your family that has played high school, college, or even pro football?
My grandfather and my two uncles were wide receivers in their time. They all played college football.
LAFM: Is there anybody that you want to give a shout out to?
I would like to thank Jeremy Offet, Kyle Harrison, Lee Doty, Corwin Aldrige, Coach Norton at NSU, Cody Howell, Hunter Hendrix, the late Ross Gwinn (former Northwestern State and New Orleans Saints offensive lineman), and of course, my parents Eliza and Gunnar Behrendsen.
LAFM: Why would a college football coach want you on their football team?
I am hard working, coachable, and respectful. I have pride in my team and will do everything in my power to better those around.
Categories: CenLa Natch, Recruit Spotlight, Recruiting, Region, Top StoryBy StaffDecember 29, 2016