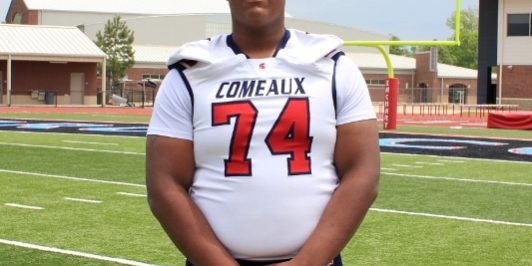 Comeaux High School has one of the best offensive linemen in the Lafayette area in Shane Vallot. In the preseason, Vallot was named to our 2nd All-Louisiana team as a center, but he is somebody that can also play offensive guard. At 6’1, 290 lbs., he is a big guy that can move, but at the same time, is very strong and will run over anybody that is in his way. Vallot is also a pretty good athlete as he also wrestles and does shotput for the track and field team. Not only he does that, but he is also starting on his coaching career coaching the freshman team and even a select football team. Vallot is a guy that uses his abilities to his advantage and plays not just because he is good at football, but has a true passion for the game. As far as offers go, Vallot has been offered by a couple of in state schools like Southeastern, McNeese, and ULL. Even though those three schools are great I-AA schools, Louisiana Football Magazine Editor and T.V. Host Lee Brecheen believes that he is very underrated for colleges.

“I saw Shane play in his junior and senior year, and I think that he is the best offensive lineman in the state that is under 6-3 in height,” Brecheen said. “He is tough, strong, has great feet, and uses his hands well. He is a big time sleeper for D-1 colleges and would not shock me if he is an All-Conference player or NFL player.”

As far as the Comeaux Spartans this year, the team went 5-6 and lost in the first round to Ponchatoula High School. It was a disappointing end to the football season for Vallot and the Spartans, but he has enjoyed his career and has enjoyed every moment with his teammates. In today’s recruiting article, the big time offensive lineman recaps his senior season, recruiting, hobbies, and so much more.

Not only Comeaux OL Shane Vallot is a big time player, but he also has a big time personality as well. (Photo courtesy of Kim Pascual)

LAFM: What is your GPA score and ACT score?

LAFM: What is your max bench, max squat, vertical, and 40 yard time?

My top three schools are Southeastern, ULL, and McNeese.

I have gained respect from all players. I also was named 1st team All-District, All-Acadiana, and named to the Lafayette All-Star team.

LAFM: Let’s talk about the season. The team went 5-6 and played in a very tough district. How disappointing was it to lose to Ponchatoula in a very close game in the first round of the playoffs to close your high school career?

It wasn’t disappointing losing to Ponchatoula. It was depressing. We were up by a touchdown and we fumble the ball. They pick it up and score. Also, our defense was doing good all night. They were shutting them down and then with 11 seconds left, they got beat with a deep ball. That allowed them to kick a game winning field goal.

LAFM: What are your strengths at playing on the offensive line?

Being aggressive, passionate about the game, and making pancake blocks.

I need to improve on my footwork a little.

I look at their facilities, their coaches, players, if they have my major, and if the community is nice and supporting.

LAFM: Who was the toughest defensive lineman that you had to play against this year and why?

The first regular season game against Cecilia because I was on kickoff return, and they kicked the ball off to me three times. Everytime, I ran over somebody, and I had like five people on my back trying to stop me. On the last return, I almost ran it all the way back.

Comeaux OL Shane Vallot is not your typical lineman, but he is very athletic at almost 300 pounds. Here he is returning a kickoff against Cecilia High School. (Photo courtesy of Kim Pascual)

LAFM: What are your hobbies when the football season is over?

My hobbies are coaching, I really love coaching a lot. I helped coach the freshman team at Comeaux, and I coach a select football team called the Swampcats. I also wrestle and throw shotput for Comeaux.

LAFM: Who is the college or NFL offensive lineman that you model your game after?

La’el Collins, a graduate from LSU and now plays for the Dallas Cowboys

I am a triplet and my first year playing football was actually my freshman year.

My uncles all played high school football but never played football after high school. That is why I am working to be the first.

LAFM: You are also a wrestler as well. Does wrestling help you on the football field?

Absolutely, it did. I did not wrestle my freshman year. My feet were slow, and I was not as aggressive. Then, I started wrestling my sophomore year. As a result, the next year playing football, I was a lot quicker and started. I went from having slow feet to having quick feet and being more aggressive. I advise all linemen to wrestle. It helps out a lot.

I want to give a shout out to my whole coaching staff for believing in me and always pushing me to be better, but most of all, to our Head Coach Doug Dotson, OL coaches Kent Gable and Ronald Gunner, and DL coach Ben Mouton for really taking me in and working everyday in the offseason, making me run when I didn’t want to and for also treating me as one of their own! These coaches really made an impact on my life, and I really love them. Most of all, I want to give a shout out to my mom for supporting me all the way no matter what. I promise that I will repay you in the long run.

LAFM: Why should college coaches want you to come play for their program?

College coaches should want me to play for them because I am a very hard working kid, and I never give up no matter what. I will always treat everyone with respect, and I really just love the game of football!