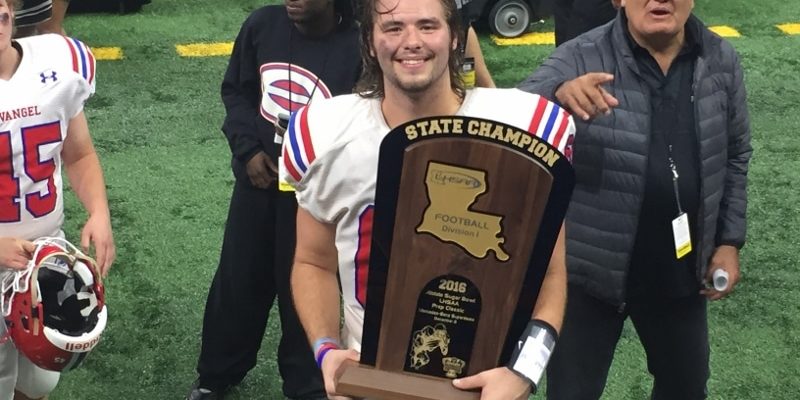 National Signing Day is now over so these recruits, that we will be covering for the rest of the year, are now commits and either finishing their final months of high school or enrolling at the college of their choice early. Evangel Christian OL Ethan Harvey is now enjoying his final months at Evangel Christian, where he has had a tremendous high school football career, before he starts a new football journey at Army-West Point. Harvey also joins another talented offensive lineman, in Plaquemine All-State Center Abraham Delfin, to West Point as well. Ethan Harvey is one of the most accomplished offensive linemen in his senior class with what he has achieved. He has been named All-District, All-City, and has won a state championship in his senior year. Not to mention that he also has received some recognition from us as well. In his junior year, Harvey was nominated for our inaugural “In the Trenches” award, which goes to the state’s best offensive lineman and he won. Harvey was also named to our 1st All-Louisiana team at the beginning of the season. Louisiana Football Magazine Editor and T.V. Host Lee Brecheen is really impressed in what he sees in the senior offensive lineman from Evangel Christian.

“Ethan Harvey has the whole package,” Brecheen said. “He is mature beyond his age, has great strength, good feet, and is very smart. That sounds like a good offensive lineman for anyone in the United States.”

It is surprising with all the qualities that Harvey has not had more offers, but Army has got themselves a great football player for years to come. In today’s recruiting spotlight, Ethan Harvey talks about his career, winning the state championship, Army, and so much more!

Evangel Christian OL Ethan Harvey chats with his teammate Tanner Ash on the sidelines during the Division I state championship game. (Photo courtesy of the Harvey family)

LAFM: What is your max bench press and squat?

LAFM: What are your accomplishments while at Evangel Christian?

LAFM: You won our inaugural “In the Trenches Award” for best offensive lineman when you were a junior. What did winning that award mean to you?

Winning that award just meant that I had to be better to live up to being the best.

I love to hit, and I want to finish my blocks.

LAFM: You have committed to Army. What is it about West Point that attracted you to go play football there?

It was the dreams of playing college football and joining the military combined that attracted myself to Army.

LAFM: You were part of the best teams in Evangel Christian history. What was it like beating teams like St. Paul’s, John Curtis, and Scotlandville to help get the program’s 14th state championship?

It was great, but what made it great was my teammates and seeing the excitement that they had.

LAFM: The team didn’t have a great start with an 0-2 record, but after that game, the team would not lose a single game the entire year. What was the turning point of the season?

We didn’t tuck our tails and run. Instead, we took it on the chin and decided to just keep grinding.

LAFM: If you had to pick one more high school football team to play against, what team would it be and why that particular team?

Neville. I believe it would have been a completely different game at the end of the year rather than the beginning.

LAFM: Who is the college or NFL player that you watch film and model your game after and why?

I don’t have one to be honest.

LAFM: Two seasons ago, the team had a heartbreaking loss to Catholic High (B.R.) for a chance to go to the Superdome. Was that loss the main motivation for the team this season?

We didn’t focus in that game, and because of that, we were a lot more focused this season.

LAFM: What was your best game while at Evangel Christian?

Every game that we won was my best. It meant not only that I did my job, but so did the rest of my team.

LAFM: Who was the toughest defensive lineman that you ever had to block?

Chris Bradley (former Evangel Christian DT currently with TCU). Even though he was a teammate, he made me become the teammate and the lineman that I am today. He was mean, nasty, and not afraid of anything.

LAFM: In your own words, what makes playing at a great football program like Evangel Christian so special?

It’s one of the best high school programs around. It prepares the athletes, for not just sports, but life itself.

I want to thank my family for always being there and continuing to be there for the rest of my life.

I am a pretty open book, but everyone always tells me that before they actually talk to me, they think that I’m just an angry person and that they’re intimidated so I guess that I am actually a pretty nice person unless you want to make me angry.

LAFM: What separates yourself from all the other offensive linemen in the state?

What separates myself from other players is my will to win and doing whatever it takes to get to the top.