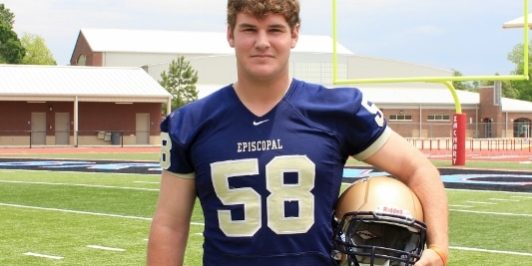 Episcopal MLB/TE Wayne Stabiler did pretty much everything for the Episcopal Knights except collecting the tickets at the front gate for the home football games. That is how versatile Stabiler is. This year, he showed off his many talents as he made All-District not only on offense but on defense as well. Keep in mind that this is a district that is loaded with great talent as schools such as Madison Prep, Dunham, Christian Life, East Feliciana, etc. Stabiler is a pretty big guy at about 6’0, 235 pounds. What makes him unique is that he is big enough to play defensive end, but at the same time, he is quick enough to play linebacker. On offense, he can play on the offensive line and can also serve as a blocking tight end. It is not that often where you can have a big guy that can play so many positions. Louisiana Football Magazine Editor and T.V. Host Lee Brecheen had this to say about the do-everything Wayne Stabiler before the season started in our Louisiana Football Magazine Preview Issue.

“Wayne Stabiler slimmed down 30 pounds this year which has made him faster,but at the same time, gives him that size,” Brecheen said. “He has quick feet and played offensive tackle as well as linebacker for the team. He is someone that is always around the ball and can make a lot of tackles.”

Stabiler does a lot of things right. He is a good blocker, a good tackler, and he even has some really good hands as he also plays tight end and returned an interception on defense. Even though Stabiler had a really good individual season, the Knights had an up and down season going 6-5 and losing in the first round to Catholic New Iberia. Now, Stabiler’s football career is over at Episcopal and is looking to not only where he is going to play college football but the position as well. Louisiana Football Magazine’s very own Alex Martin caught up with the Episcopal Senior linebacker as he talks about his football career, hobbies after football, the player he models his game after, the signed jersey that he has from an NFL All-Pro quarterback, the music that pumps him up before a game, and so much more in today’s recruiting spotlight!

Episcopal LB/TE Wayne Stabiler not only is a talented player but has a lot of passion for the game of football as shown here. (Photo courtesy of Trent Massengale)

LAFM: What is your GPA Score and ACT score?

LAFM: What is your max bench, max squat, and 40 yard time?

LAFM: How old were you when you first started playing football?

LAFM: What are some of your accomplishments throughout your career?

Getting 1st team All-District my senior year on both sides of the ball, making my first and last pick six my senior year are some of my accomplishments playing football.

I need to improve on my speed and agility.

LAFM: What are your strengths as a Linebacker?

My strength at the LB position is taking on blockers, shedding them, and making the tackle. I like when people try to run over me. They never can because I am a big person.

I look at the views and what the campus has to offer because I am a nature person. I also look at rankings of their business school nationally.

LAFM: What are some of your hobbies when the football season is over?

I love to hunt and fish, and school really takes over after football ends.

LAFM: Who is your favorite NFL Linebacker and why?

Kwon Alexander (former LSU linebacker currently with the Tampa Bay Buccaneers) because I think it is so cool how I watched him throughout my high school career and now he is starting for the Tampa Bay Bucs.

LAFM: Do you have any pregame rituals?

I do not have any pre-game rituals.

LAFM: What is your go to pre-game meal?

LAFM: Who is your favorite music artist to listen to before each game?

There is no one that has played at any higher level than high school in my family.

LAFM: What do you want to major in college?

LAFM: Who is your biggest role model?

Turner Graham because he was the Senior captain when I was a freshman.