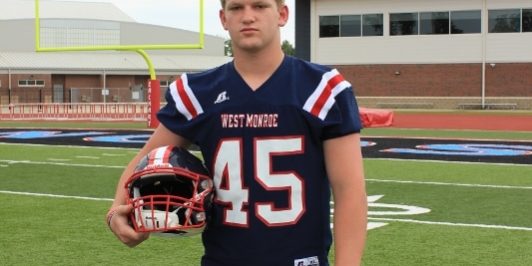 It looks like the West Monroe football program is back after they made their return back to the Super Dome for the first time since the late great Don Shows took the Rebels there in 2011. The Rebels always had some great talent on their football teams over the years, but talent will only get you so far. This past season, the Rebels had some great football players such as MLB Jacob Adams. Adams is a very athletic and smart leader for a defense that made it all the way to the state championship game. He also had a very productive high school career making over 300 tackles and being named to 1st team All-District multiple times. Adams is also a versatile guy as he is a very dependable tackler and can play the run as well as the pass. In the preseason, he was named to our 1st team All-Louisiana team as a middle linebacker, and he did not disappoint having a very good season as the defensive captain for the West Monroe Rebels. Louisiana Football Magazine Editor and T.V. Host Lee Brecheen believes that he is one of the best linebackers in the state and a lucky college is going to get him.

“I watched Jacob Adams play in his junior and senior year,” Brecheen said. “You can tell that he has a high football I.Q. because his dad is an assistant football coach for the Rebels. For the linebacking position, there is one thing that you cannot coach, and that is being able to read and react to a play with high effort. That is what Jacob can do, and he can do it well. He is a middle linebacker for college because of his ability to be a leader of a defense and making calls in the huddle. He would be more suited to start college in I-AA, but with the right school, he could play DI as a middle linebacker, or as they say MLB, within a year or two. I would think ULM would be a natural fit for this young man for that position or a team like Central Arkansas that is not far from home.”

As of right now, Adams has received some offers from some in state schools such as ULL, Louisiana Tech, and Northwestern State, but is still undecided on where he is going to play football for the next couple of years. In today’s recruiting article, the star senior linebacker from West Monroe talks about his career playing for the Rebels, bringing the school back to a championship contender, his accomplishments, recruiting, and so much more!

West Monroe MLB Jacob Adams does a great job of finding the ball carrier and pursuing the ball as he does right here. (Photo courtesy of Amy Hanson photography)

LAFM: What are your stats and accomplishments throughout your high school career?

LAFM: What are some things that you look at when you look at colleges to play for at the next level?

I look at the school that is the best fit for me to work my way into the rotation and get on the field.

LAFM: What is your major when you attend college?

LAFM: What are your strengths as a middle linebacker?

I have an eye for the football, tackling, and being able to read my keys and outsmart the offense are my strengths as a middle linebacker.

LAFM: What are some things that you need to improve on for college?

I need to improve on my speed and size.

LAFM: Let’s talk about this year. This season, the team made the Super Dome for the first time since the late Don Shows was the head football coach. What does it mean for this school community to get back where the program belongs even though the team didn’t get it done this year in the state championship?

LAFM: What was your best game while at West Monroe and why?

It is the St. Amant playoff game this year. I had two picks and led the team in tackles. Also, one of those picks ended the football game.

LAFM: Who is a college or NFL linebacker that you model your game after and why that person?

Ray Lewis (former Miami Hurricane All-American and Baltimore Ravens Pro Bowl middle linebacker). I always liked the way that he played the game and put people on his back to win games.

LAFM: You made our 1st team All-Louisiana team and also our front cover of our magazine. What does it mean for you to be recognized as one of the best at their position in the state?

I was very honored to represent my school and team on the front cover of the magazine and was very excited for the opportunity.

I am the catcher for our baseball team, and I also enjoy to hunt and be in the outdoors.

LAFM: What is the best part about playing for West Monroe?

The best part about playing for West Monroe is the tradition that is here at the school. This year’s team became so close to each other and bonded all the time at different people’s houses throughout the week leading up to gameday.

LAFM: Who was the best offensive player that you ever played against in your career and why?

There are actually two players in Shea Patterson (former Calvary Baptist and current Ole Miss quarterback) and Keytaon Thompson (Landry Walker quarterback and Mississippi State commit). They both could put the ball wherever they wanted to. Thompson, at 6’5, 230, was a fantastic quarterback that could run and throw the football with three guys hanging on him. It was really hard bringing him down.

West Monroe MLB Jacob Adams is shown here as he gets ready for this play during this year’s state championship game against Landry Walker. (Photo courtesy of Tom Morris photography)

LAFM: What advice do you want to give to next year’s West Monroe team?

Trust the coaches and work as hard as you can. Our coaches know how to win and also know what it takes to get back to the Dome.

LAFM: Who are some people that you want to give a shout out to for putting you in the position that you are in today?

LAFM: Why should college coaches want you on their football team?

College coaches should want me on their team because I will bring my best everyday. I might be a little undersized, but I have an eye for the ball. I also make up for my size with my pads and my work ethic.