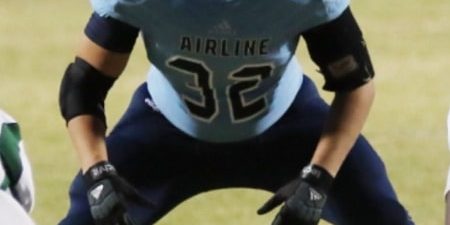 Airline MLB Josh James is a tough football player that every team needs. He has the intangibles that every coach would love. James is someone who would do whatever it takes to win a game. At Airline High School, Joshua James proved to be a team leader for the defense as he led by example on and off the football field. James gets his leadership from his father who is actually an assistant principal at Parkway High School. During his career, he was named 1st team All-District twice as well as 1st team All-City and All-Parish, and this is a district that has a lot of quality teams in the area including Evangel Christian, Parkway, Byrd, Haughton, Captain Shreve, and Southwood so he has played against some great players himself. He is productive, a leader, and a tough football player that is really good at stopping the run and tackling in open space. It was a very good football career for James, but it came to an end in the first round of the playoffs when they lost a tough game to Sulphur High School. Now, James has his focus on what college he will be playing for the next couple of years. Louisiana Football Magazine Editor Lee Brecheen believes that a tough, instinctive linebacker like Josh James would be perfect for a Division II school.

“Josh James is just a tough football player,” Brecheen said. “He would definitely fit for a Division II program or he could play for the right I-AA program. These programs can use a good football player like James.”

In today’s article, the productive Airline linebacker talks about his career playing for the Vikings, recruiting, the player he models his game after, his family, this season, what he does in the off-season, and so much more!

Airline LB Josh James is getting his linebacker stance before an upcoming play. (Photo courtesy of Russell Hedges)

LAFM: What are your stats and accomplishments throughout your career?

I am a run stopper, but I am also very good at blitzing as well as pass drop.

I need to work on my flexibility.

LAFM: This season, the team had an up and down season going 5-5 and losing the first round to Sulphur by a touchdown. What are your thoughts on the season as a whole and how disappointing was it to end your high school career with a close loss like that?

It was very disappointing. I hated not winning one playoff game especially the last two games being really close. We played a couple of close games like the game vs. Byrd but ended up losing in 3 OT. I really enjoyed playing for Airline and really loved my coaches and teammates.

Good competition and the coaches. I want to be at a place where I can really grow as a man and as a football player.

LAFM: What are some things that you do when you are not playing football?

I am a three year starter in baseball for Airline so when it is not football season, I’m doing something for baseball.

Airline LB Josh James’ best game of his career was against Captain Shreve this year and here he is making a solid tackle on this Gator runningback. (Photo courtesy of Russell Hedges)

LAFM: Your dad is actually an assistant principal for Parkway High School. What made you decide to go to Airline High School instead of going with your father to Parkway?

Well, my dad just got the job this past year so I didn’t want to abandon my teammates and my coaches for my senior year.

LAFM: What was your best game while at Airline High School and why does it stand out to you?

The Captain Shreve game, this year, was probably my best game. Shreve came in 4-0 so it was a big game for us. I’m not sure on how many tackles I had, but I just remember flying around and making a lot of plays.

I have always been a fan of Luke Kuechly for the Carolina Panthers. He just works really hard and cannot tell that he is just a field general on the field.

My favorite team was the Pittsburgh Steelers and just because my mom grew up loving the Steelers so I started watching them at a young age?

LAFM: What is your pregame routine before you go out and play?

I eat and then take a nap for about an hour and get ready. Right before we go out, I say a prayer and go ball out.

LAFM: What is an interesting fact about yourself that we don’t know about?

LAFM: Is there anybody in your family that has played high school, college, or even pro football? If so, who is it and where did he play?

My brother is playing right now at ULM. My dad played at Northwood and then, went in to play football at Southern Arkansas.

LAFM: Do you want to give a shout out to all the people that helped you get in the position that you are in today?

For my position, I had three coaches that really helped me out. Coach Chris Knotts, who was the linebacker coach my sophomore year, really was fun playing for. He really helped me make the transition to varsity football. Coach Seth Stowell, who was the defensive coordinator my junior year and most of my senior year, really helped me grow as a player and as a linebacker. Then, for my final game, Coach Brian Taylor helped with the linebackers, and he brought some new stuff to the table. I really enjoyed being coached by him in my final game. Also, I would like to thank my personal trainer Jason Hughes for helping me get where I need to be.

LAFM: Why should college coaches want you on their team?

I love the game of football. I bring up other people around me. I’m never out of the fight and never quit. I’m a skilled football player that can continue to grow and become better.