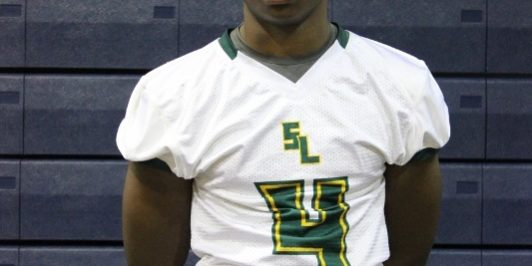 Southern Lab linebacker Chris Allen is one of the biggest and highest profiled recruits in the state of Louisiana this year. This is a football player who has all of the ability in the world at 6’4, 235 pounds. He has the speed to go from sideline to sideline and make tackles. It is scary that he is still trying to get even better playing linebacker. Over his high school career, Allen was a two time state champion, named Defensive MVP in Class 1A twice, and All-District twice. The two time LSWA Class 1A defensive MVP had over 80 tackles including 14 for loss and six sacks this season. Opposing offenses ran a lot of plays away from Allen but he showed his God given ability by tracking down a lot of those plays. Thanks to his football talents, many big time D-I programs have their eyes on the senior linebacker from Southern Lab. Programs like LSU and Alabama are fighting each other to grab him. For Alabama, Chris Allen could be another great linebacker that plays under Nick Saban. For LSU, Chris Allen could see the field and play some big time snaps at a position which is of need for next year. Even though, he is an Alabama commit, he is still considering other programs. Time will eventually tell where the talented outside linebacker/defensive end will go. Louisiana Football Magazine Editor Lee Brecheen believes that Chris Allen has the potential to play two positions for whatever team he eventually picks and can be even better than two SEC defensive studs that played this year!

“Chris Allen has a lot of ability and is a physical specimen,” Brecheen said. “He might grow to play defensive end or stay at his size and become an even better linebacker. He is an Arden Key (current LSU defensive end) or Tim Williams (Former U-High defensive end who played for Alabama and is entering the NFL draft) type of player. I think that he is way ahead of both Williams and Key because he is bigger than both of them when they were in high school.”

To say that he is already a step ahead of two of the best defensive players in the SEC is great news for Chris Allen and he cannot wait to prove himself in his Freshman year for a lucky SEC program. I caught up with the former Southern Lab linebacker and Alabama commit Chris Allen as he talks about his game, career at Southern Lab, his coach Marcus Randall, Alabama, recruiting, and so much more in today’s recruiting spotlight!

Southern Lab Chris Allen added playing in the Under Armor All-American game to his list of many accomplishments. (Photo courtesy of Chris Allen)

LAFM: What are your accomplishments over your high school career?

I was named All-District multiple times, All-State twice, and named Defensive MVP in 1A twice.

I am very fast and quick for my size.

LAFM: What are some things that you need to improve on when you go to college?

I need to improve on my technique and pad level.

LAFM: Who is the college or NFL linebacker that you model your game after?

I don’t model my game after anyone. I am my own player.

LAFM: Let’s talk about this season. You guided the defense to back to back state championships. What does that mean for you to help Southern Lab to become one of the best football programs in the state?

It is pretty special considering that we got blown out by IMG Academy two years ago. It really motivated us to do good the rest of the season and the critics did not believe that we could do it and we did. It was a great feeling to win the state championship and to send off those seniors on a high note. For this year, there were still doubters in us and it lit our fire as we won the second straight championship to cap my high school career off.

LAFM: Your head coach Marcus Randall has been through the recruiting process, played for Nick Saban at LSU, and has played at every level of football.What influence has he had on your high school career and your recruiting process?

It has been tremendous to have Coach Randall by me in this decision process because he has been through the process himself. He played college football at LSU and his experience playing football helps me a lot with my career.

LAFM: You have committed to play for the best program over the last decade in Alabama. Is it the fact that Alabama has produced many NFL linebackers over recent years and the national championships that have drawn your attention?

Everything that you said draws my attention to Alabama. What Coach Saban and Alabama has done is incredible over the last couple of years and I would love to be a part of it.

LAFM: Does the national championship loss affect your decision at all?

If anything, the national championship loss enhanced my decision because even though the team lost, it was a great season and I want to see how the team improves and faces adversity. Seeing how the team can improve is really crazy what the team can accomplish next year.

LAFM: Are there any other schools that you are still considering?

I am still considering LSU. I have an upcoming visit and am excited for it.

LAFM: As you know, you are a really high ranked recruit. What is some advice that you would like to give other highly recruited players on how to deal with the recruiting process?

My advice is to have fun with it. Continue to work hard and give it all you can in practice. Enjoy the process.

LAFM: You were named to our 1st team All-Louisiana team at the beginning of the season. What are your thoughts on playing high school football in Louisiana and being recognized as one of the best players in a state that is full of great talent?

It really means a lot. The state is rich in talent not only in football but in other sports like basketball. It is an honor and it is special to be recognized as one of the best football players in Louisiana.

LAFM: Who are some artists that you like to listen to before you play in a game?

Wnc Whop, Lil Yachty, Kevin Gates, and Kodak Black are some of the artists that I listen to before each game.

There is nobody in my family that has played high school, college, or even pro football.

LAFM: Who are some people that you like to give a shout out for putting you in the position that you are in today?

I want to give a shout out to my parents and my past and present coaches and teammates.

LAFM: What makes you special or unique as a football player?

I am very big and fast for the position. I also work very hard to be where I am at.