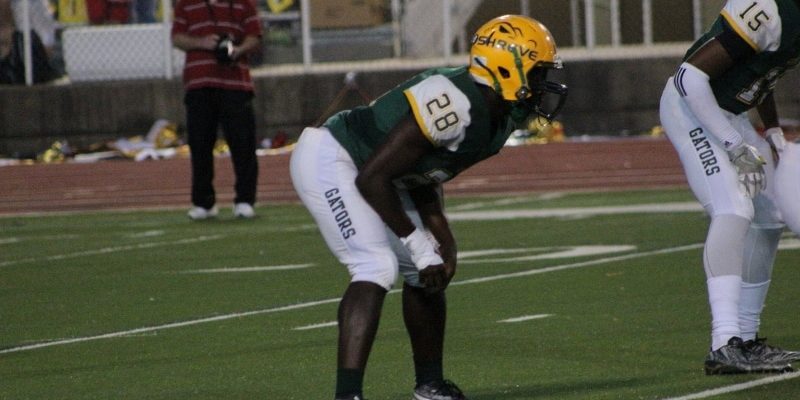 There are a lot of great football players in this state that have great football ability and use that ability on the field. Anybody with football ability can play great on the football field but what is more impressive is what they do in the classroom. After all, they don’t call the term “student-athlete” for nothing. Captain Shreve linebacker Ashton LaCaze is one of those football players who excel in the classroom and on the football field. As a linebacker, LaCaze is really productive. Last year, he had over 100 tackles and was named 1st team All-District. LaCaze was also our defensive player of the week in week one earlier this year when the Gators faced Pineville Rebels. In that game, the star linebacker was all over the field making plays as he had 14 total tackles including an impressive six behind the line of scrimmage. As just as impressive as LaCaze is on the gridiron, he is just as impressive in the classroom. He has almost a 4.0 G.P.A. and a 26 on his ACT. Captain Shreve Head Football Coach Bryant Sepulvado has nothing but positive things to say about his senior leader.

“Ashton LaCaze is a really good player for us,” Sepulvado said. “He is not only a great player but he is really smart as well and is also a great representation of our program.”

LaCaze is a very versatile linebacker as he is active around the ball and behind the line of scrimmage with his 20 tackles for loss and can also make plays on special teams. Last year, LaCaze also had two blocked punts. Not many teams have two blocked punts in a season! Another person that was impressed by LaCaze was our very own Lee Brecheen.

“I met Ashton and he’s super smart,” Brecheen said. “He goes all out on the football field and his leadership are intangibles that go a long way with being successful.”

Last year, the Captain Shreve Gators won three games all of last year. This year, the team has already won four games exceeding their win total from last year in only six weeks. After the great start, LaCaze and the Gators are looking for a great end to the regular season and to make some noise in the playoffs. We met up with Ashton LaCaze to talk about the team’s major improvement, recruiting, advice on how to balance school and sports, his famous cousin, and so much more in today’s recruiting interview!

Ashton LaCaze’s cousin is Barkevious Mingo and shows his pass rush ability like his cousin on this hit on the quarterback. (Photo provided by Ashton LaCaze)

LAFM: What is your GPA and ACT score?

LAFM: Do you have any offers from colleges right now? If so, where are they from? If not, have you received any interests from colleges?

LAFM: Last year, the team went 3-7 and this year already, the team has already won four games. Why has there been a dramatic improvement the way the team is playing from last year to this year?

Our team confidence and moral has greatly increased thanks to great coaching, players playing well together, and leadership amongst each other.

I need to improve on getting off of blocks when linemen reach the second level.

LAFM: What do you do when the season is over?

Usually when the season is over, I would go on to my next sport and begin working out with that sport. Now that I’m fully focusing on football, I will just continue to workout with the team and stay in shape.

My main goal this season is to make the All-District team. I also set my goal to surpass my previous season’s total tackle count with at least 125 tackles. I also plan to score a defensive touchdown.

LAFM: In week one, you were named our defensive player of the week as you had 14 tackles and 6 for loss. What are your thoughts on the way you played?

I played my game and I didn’t allow the other team to dictate the way I played. Although if you ask me, I felt as if I didn’t do enough (jokingly).

LAFM: If you had to compare yourself to a college or pro football player, who would it be?

I would honestly compare myself to, the now retired, Ray Lewis (NFL great at linebacker for the Baltimore Ravens) or my cousin Barkevious Mingo (former LSU and Cleveland Brown defensive end currently with the New England Patriots) because they both are very talented and very physical when it comes to playing the linebacker position and they both put fear into the opposing team’s hearts when they were spotted on the field.

LAFM: What are the team’s goals for the rest of the year?

The goal for my team is to make history by going 8-2 or 7-3 and achieve a deep playoff run. Captain Shreve hasn’t had a record like that in 5-A for around 30+ years.

LAFM: Is there anybody in your family that has played either high school, college, or even pro football? If so, who are they and where did they play?

My cousin Barkevious Mingo played in college and now in the NFL. He played for LSU and graduated in 2013 when he entered the draft.

LAFM: Who are some of your teammates and coaches that you want to give a shout out to?

I want to give a shout out to Hosie Thomas III for being the hardest working person I’ve ever met, Micah Latin and Colyn Givens for continuing to push me even when I couldn’t go on anymore, and Coach Sepulvado for believing that I would be a leader on his team before I believed it myself.

LAFM: What is a fact about you that nobody knows about?

I’m honestly an open book. There’s nothing that I can hide about myself.

LAFM: Your coach says that you are not only really good on the football team but in the classroom as well. How difficult is it to manage academics and football at the same time and what advice would you give to football players balancing those two?

It’s not really difficult managing the two, but I would say to others, make sure your do as much homework, classwork, etc. in class and during school so that after football practice, you won’t be overwhelmed with a mountain of homework.

LAFM: What separates yourself from all the other linebackers in the state?

Other linebackers may be bigger, stronger, or faster than me, but none of them can lead like I can. None of them have the killer instinct I have when I see a ball carrier. None of them has the heart and passion I have for the game of football.