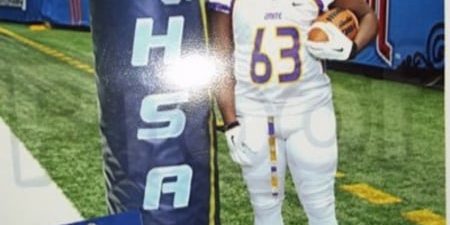 Amite High School has plenty of great athletes such as star wide receiver Devonta Smith and Louisiana Tech quarterback commit Elijah Walker. Even though, there are great athletes on the offensive ball, do not overlook the defensive ball as well. The Warriors have a star in the making in DT Ishmael Sopsher, who is only a sophomore, but his older brother Rodney Sopsher is a really good football player as well. Throughout his career, Sopsher was named top defensive lineman MVP and 1st team All-District. He has also started in a state championship game. Some players will never get to say that.  Earlier this year, some of his family members were affected by the floods that occurred in August all around Louisiana. He has been through ups and downs this year and has handled it really well. This is a guy who was one of the leaders on a team that made the state championship this year and can set the tone for a defense. He is a really good athlete at 6’2, 250 pounds and gives it his all for 60 minutes. He also comes from a very talented football family that not only includes his brother, but his dad also. As of right now, Rodney Sopsher has drawn attention from some colleges such as ULM, Texas Southern, Independence Community College, and East Mississippi Community College. Louisiana Football Magazine Editor and T.V. Host Lee Brecheen had this to say about the underrated defensive end from Amite High School.

“I think what makes Rodney a very good player is hes quick and brings it every snap,” Brecheen said. “When kids are 6-1 or 6-2 and under 270 pounds, they tend to be under recruited by bigger schools at the DT or DE postion. This is a kid that will be 270 to 290 in two more years  plus and still have good feet and you can’t coach his high effort. I saw this in person sideline to sideline tackler. I think he is D-I if he goes to the right school. He could stay at DE in college, and he is ready now to play at that position if he doesn’t bulk up and move to DT in college.

In today’s recruiting article, Rodney Sopsher talks about his playing career at Amite High School, recruiting, this season, his football family, and so much more.

Amite DE Rodney Sopsher goes pass a blocker here in a game against Kaplan. (Photo courtesy of the Kaplan Herald)

LAFM: What is your name, age, position, and school you play for?
Rodney Sopsher, 19 years old, defensive end, Amite High School
LAFM: What is your height and weight?
6’2, 250
LAFM: What is your ACT score and GPA?
16, 2.8
LAFM: What is your max bench press, max squat, 40 yard time, and vertical?
325 lbs., 515 lbs., 4.9 40, 29.1
LAFM: What are your stats and accomplishments while playing at Amite High School?
1st Team All-District, SEN top defensive lineman MVP, and Louisiana top 200. 156 tackles, 46 tackles for loss, 18 sacks, and 7 fumble recoveries in my career
LAFM: What are your top schools as of right now?
ULM, Texas Southern, Independence Community College, East Mississippi Community College
LAFM: What are some things that you look at when you look at colleges?
Great coaching, discipline, facilities, family, and a place to call home
LAFM: You play defensive end and middle linebacker. Which position are you getting recruited to play at?
Defensive end
LAFM: What are your strengths as a football player?
Speed, toughness, endurance, quickness, technique, discipline, good change of direction
LAFM: What are some things that you need to improve on?
hand movement and need to improve a lot on my speed
LAFM: Let’s talk about the season. The team had a great year going 12-3 and making to the Super Dome but the team fell short of winning. Even though the season ended in a disappointment, what do you have to say about the season as a whole?
Well, we had a great season. I had a chance to play and grow up with a great group of guys. Everything that we did, we did it as a family and as a team. When you have great a great coaching staff, it makes things even more exciting. We wanted to win the championship, but we did not come up on top. I had a chance to play 15 great games with my boys. We gave it our all and left it all on the field.
LAFM: You actually have a younger brother named Ishmael Sopsher. He is one of the best defensive linemen in the 2019 class. What is your relationship like with your brother on and off the field?
There is nothing but love on and off the field. It is tough love, but we motivate each other to be great. We share the same dreams to play together in college.
LAFM:  Who is a college or NFL player that you model your game after?
I model my game after Dante Fowler Jr. (former Florida defensive end currently with the Jacksonville Jaguars)
LAFM: Do you play any other sports besides football?
I also do track.
LAFM: I heard some of your family members lost their home during the flood this year. What is the update on them and how much did the family lose?
God has really blessed them to come out of that situation tremendously, and as of right now, everything is back to normal.

LAFM: There are a lot of great athletes on the football team. Do you want to give a shout out to those guys?
I want to give a shout out to the Amite High School football team for 2016-2017. We are one team together, and everyone makes the train move.
LAFM: What was your most memorable game playing for Amite High School?
I would say the 2014 game against Southern Lab.
LAFM: Is there anybody in your family besides your brother that has played high school, college, or even pro football?
My dad Rodney Sopsher Sr. is one of the best defensive tackles to ever come out of Amite High School. He was named to the All-State team twice and played at Southwest Community College where he was named Freshman All-American.
LAFM: What separates yourself from all the defensive players in the state?
My technique, work ethic, endurance, and discipline sets myself apart. I am also a hard worker that never gives up until the last whistle.
Categories: North Shore-Tangi, Recruit Spotlight, Recruiting, Region, Top StoryBy StaffDecember 28, 2016