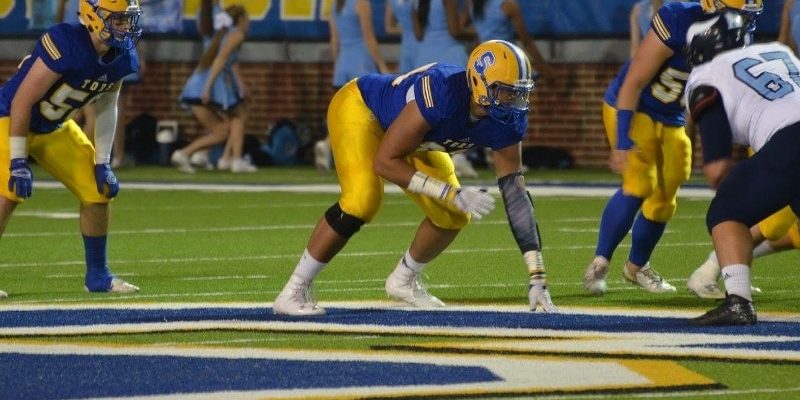 There are a lot of great football players that were once really good basketball players as well. Look at the tight end position in the NFL. Great players such as Tony Gonzalez, Antonio Gates, and Jimmy Graham have used their basketball background to their advantage to help them with their football careers. Now, more and more teams are getting players that had a basketball background and developing them into really good football players. That is what Sulphur High School is doing with LaColby Tucker. Unlike the guys I mentioned, Tucker plays on the defensive line but shows his length and athletic ability on the edge. Tucker is a giant among men to go with his athletic ability. He is over 6’8 at 270 pounds but has the speed and quickness to play defensive end. He can also play inside at defensive tackle. He is capable of taking over a game as he broke the Golden Tors’ record for most sacks in a game. With his long frame, he can disrupt a quarterback’s rhythm whether it is sacking the quarterback or batting passes down. He still has a lot to learn, but there is a lot of potential for the two sport giant for the Golden Tors. Louisiana Football Magazine Editor and T.V. Host Lee Brecheen believes that there is a lot to like about Tucker.

“LaColby Tucker is a late bloomer but has enormous upside,” Brecheen said. “He’s a legit 6-8 with some change in height and over 270 with no fat. This kid is still learning the game but will go to a Junior College. In two years, he could be a star.”

There is a lot of adjustment for a big guy coming from the hardwood to the gridiron, but there is a lot of talent in this young man and he is on his way to figuring it out. We caught up with LaColby Tucker as he talks about the team’s successful season, his teammates, the transition from basketball to football, his top schools, and much more in today’s recruiting article!

All-District Honorable Mention two years in a row, and I hold the record for most sacks in a game.

LAFM: You are 6’9 over 270 pounds and you have a basketball body. What sport do you want to play at the next level?

I can play both basketball and football.

I am not afraid to hit anyone. I am strong and quick off the ball.

LAFM: What are some things that you can improve on as a football player?

Everything. There is always room for improvement.

J.J. Watt (current defensive end for the Houston Texans) because he works hard and is the best defensive end in the NFL. His technique is flawless with a well rounded game against the run and the pass.

LAFM: What is the dream college that you want to play for and why?

LSU, because it’s always been my dream since I was a kid growing up watching them play. It’s a great environment and has a great academics. Their sport teams are the best in my opinion.

LAFM: What are some things that you take from playing basketball that help you in regards to football?

Footwork, hustle, concentration, getting the ball, 2nd and third chances, and playing with heart have helped me play not only basketball but have helped me with football as well.

LAFM: Let’s talk about the season. Sulphur went 8-4 and lost to a very good Landry Walker team. What are your thoughts on your senior season?

It was great. The team grew so much as a brotherhood and Coach always taught us about how to be a man and about life. Most of all, we played together and played with heart. I love this team and the coaching staff.

LAFM: You play against some good athletes every day in practice like J’cobi Skinner and Byron Walker. What are your thoughts on them as football players?

They are great football players, but most of all, they are hard workers.

LAFM: What was your best game while at Sulphur High School and why?

My last game as a freshman was my best game because I had three sacks, six tackles, and a fumble recovery for a touchdown.

Sulphur DE LaColby Tucker (98) fights off this block to get to the ball carrier. (Photo courtesy of Special Touch by Trish)

LAFM: What is the best part about playing on the defensive line?

You get to make big plays and strike fear into the offense’s heart and Protect the House.

My dad and my cousin played football.

LAFM: Who are some people that you want to give a shout out to for putting you in the position that you are in right now?

I want to thank God, my family, my friends, and my coaches.

LAFM: What is an interesting fact that our readers don’t know about?

I’m different from everyone personality wise and I love to draw cartoons on my free time.

LAFM: Why should colleges want you to come play for their program?

I’m a hard worker, and I am coach-able. I love the sport and am a very positive person. I will do whatever it takes for the betterment of the team.
Categories: Lake Charles-Lafayette, Recruit Spotlight, Recruiting, Region, Top StoryBy StaffJanuary 19, 2017