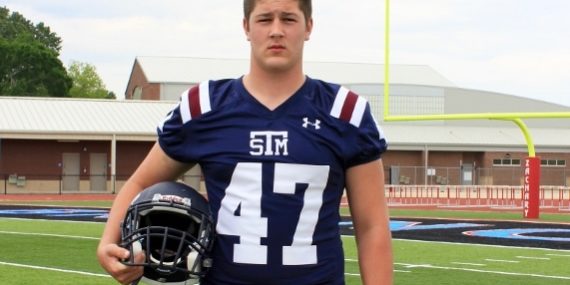 The St. Thomas More Cougars are one of the favorites to win the state championship this year even though the team lost a lot of key starters last season when they lost in the state championship to Parkview Baptist. As usual, Coach Jim Hightower has done an excellent job with the program and new names such as QB Nate Cox on offense and guys like DE Hunter Bergeron give the Cougars a really good chance of going to the state championship for the second year in a row and take it a step further and win. Bergeron is one of the key players on the defense. He is still adjusting and learning the game, but he has a lot of potential. He definitely looks the part as a a defensive end. He is a big guy at 6’5 at 240 pounds. Bergeron does a good job of bullrushing opposing offensive linemen into the quarterback on pass rushing situations and plays really well against the run. Bergeron also shows some versatility as he plays some fullback in short yardage situations. A guy like Bergeron can give offensive and defensive coordinators fits with what he can do on the football field.  Louisiana Football Magazine Editor and T.V. Host Lee Brecheen gives his take on a player on the rise in Hunter Bergeron.

“Hunter Bergeron is a huge kid that is still raw and continuing to learn the game,” Brecheen said.

This is a senior that has a lot of potential to play at the next level and is the type of player that can be a X-factor for the Cougars in this playoff run. After a 7-3 regular season that resulted in a district championship, the Cougars are coming off a bye as the number three seed in the Division II playoffs and are looking to start their playoff run on a high note against E.D. White this Friday. We caught up with the talented defensive end from St. Thomas More to talk about this season, the playoffs, recruiting, and so much more in today’s recruiting interview!

I have one offer from Arkansas-Monticello.

LAFM: What are your stats and accomplishments this year?

For the season, I have 55 tackles and three forced fumbles.

LAFM: You play a lot of positions mainly defensive end and fullback. Which position do you prefer to play?

I mainly play defensive end. I only play fullback in short yardage situations.

I can read the backfield well and get off blocks.

I need to make sure to contain the quarterback more when I am pass rushing.

LAFM: The team won the district championship this year. What does it mean for the team to end the regular season undefeated in a tough district?

It felt good after losing some close games early in the season.

LAFM: Last year, the team was so close in winning their first state championship last year. How disappointing was it to go all the way there and lose a very close game to Parkview Baptist?

It felt like we cheated ourselves, and I thought we were a better football team. We just didn’t finish in the fourth quarter.

LAFM: Has the disappointing loss in the Superdome been the main motivation for the team to end the season on a higher note?

Yes. Our minds have been set on returning to the Dome and bringing home a state championship.

LAFM: The team is the number three seed in the playoffs and one of the favorites to win the Division II playoffs. Louisiana Football Magazine Editor and T.V. Host Lee Brecheen even picked the team to win it all. In your opinion, what will it take to get there for a second year in a row and win it?

We have to finish strong and keep our mind on the goal ahead.

Another quality that Bergeron has is forcing fumbles. Here he is forcing a fumble in a game earlier in the season. (Photo provided by Hunter Bergeron)

LAFM: Last game, the team had a bye. In your opinion, would you rather play the first game and get the playoff jitters out the way or do you want to get the week off, rest, and prepare for the next week?

I feel like the bye week was good work for us to work out and regain some lost strength and to work on ourselves as a team.

LAFM: What sticks out to you about this week’s opponent E.D. White on film?

They have a pretty good offense and don’t give up on every play.

LAFM: Who was the best offensive lineman that you faced while at St. Thomas More?

Zach Tom (offensive lineman from Catholic High) was the best lineman that I have faced.

LAFM: Now let’s go back to talking about you. What was your best game while at St. Thomas More?

The game against Carencro when I had two forced fumbles.

LAFM: What would it mean for you to win the program’s state championship for Coach Hightower?

It would mean a lot to win the first state championship for Coach Hightower.