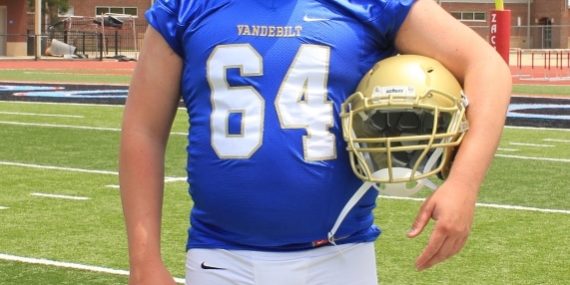 Vandebilt Catholic C/OG Jean-Pierre Arceneaux is a very underrated offensive lineman who is big, mean, and has really good feet. Not only does he have the physical traits to play on the offensive line, but he is also versatile to play at either of the guard spots as well as the center position. Arceneaux was a former offensive lineman at South Lafourche until he transferred to Vandebilt Catholic. Even though Arceneaux sat out a for a year, due to transfer rules, Arceneaux did not miss a beat and had his best year of his career making All-District as a senior. After a really good senior year, he is now looking at where to play his college football at. He has offers from Northwestern State and Nichols but has received some interests from colleges in the state as well. Louisiana Football Magazine Editor and T.V. Host Lee Brecheen believes that Arceneaux is good enough to play at the next level.

“Jean-Pierre Arceneaux did a great job after sitting out a full season in 2015 after transferring from South Lafourche High School,” Brecheen said. “It is tough for linemen to get back as quick as this kid did. He is mature, tough, and wants to learn more. Some I-AA or D-II school will get a steal in the end and could start after red shirting on the I-AA level.

In today’s recruiting interview, the senior offensive lineman talks about his high school career, recruiting, his family, Northwestern State, his family’s connections with the new LSU coach, the future Hall of Famer that he trains with, and so much more!

I was named All-District my senior year.

LAFM: You can play guard and center. Which position do you want to play in college?

I am recruited to play guard, but I can play both.

My strengths are my footwork and my strength. I am also pretty good at reading a defense.

LAFM: What are some areas to your game that you want to improve on?

Trying to get my steps to be even quicker and my agility are some aspects that I am trying to improve on for next year.

LAFM: Do you rather pass blocking or run blocking and why?

Run blocking because I get to be more physical when I run block.

LAFM: Let’s talk about your senior season. The team had a really good regular season going 8-2, but the team lost a very close game to E.D. White in the first round of the playoffs. How disappointing was it to lose earlier than you expected to?

We did have high expectations to make it far into the playoffs, and it was very disappointing to lose early in the playoffs. However, it was a really good season.

LAFM: Out of all the games that you have played, which one sticks out to your mind the most and why?

LAFM: In speaking of South Lafourche, you transferred from that school and had to sit  out your junior year to play for Vandebilt Catholic. How tough was it for you to watch your teammates play and to wait for another year before you had to play another down of football?

I could not wait to help the team. It worked hard off the field, and it paid off this year.

Vandebilt Catholic C/OG Jean-Pierre Arceneaux is very versatile as he can play center as well as guard. (Photo courtesy of Leo Bourg photography)

I listen to music, stretch, and then, go crazy.

LAFM: Who is the college or NFL offensive lineman that you model your game after?

Kevin Mawae (former offensive lineman for the LSU Tigers, Seattle Seahawks, New York Jets, and Tennessee Titans). I actually train with him and work with him. It is all about footwork with him, and I always watch his film to help my game out.

LAFM: What do you want to do when your college career is over?

I want to coach after. My dad actually coached at McNeese and Nichols for a couple of years so it is something that I want to do.

LAFM: In speaking of your dad, he is very familiar with Ed Orgeron, the new head coach at LSU. How does your dad know Coach Orgeron, and what do you have to say about him being the head coach now for LSU?

Both of them go way back. They actually grew up a mile away from each other. My dad and O coached at Nichols together. He is excited for him, and we are all pulling for him and hope that he is there for a long time.

LAFM: What is the best part about playing on the offensive line?

Being physical, protecting your quarterback, and being the main reason for the team getting yards is definitely the best part about it.

I like to go camping as well as hunting and fishing.

LAFM: Are there any teammates or family members that you like to give a shout out to?

My mom because I forgot to give a shout out to her last time when I was on the T.V. show, my brother, and everybody else that has helped me along the way.

LAFM: To all the college coaches reading this article, what do you want to say to them to promote yourself?

I want to tell them that I am tough, mean, and not scared to play.