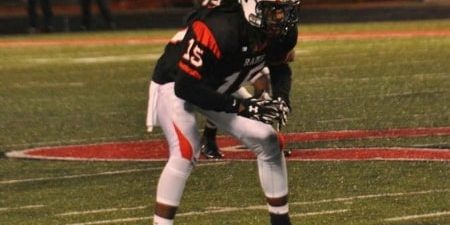 Richwood cornerback Corey Buie is one of the most if not the most underrated cornerback in the Monroe area. Buie does not get enough credit for what he does for his team. He is a key part on the Rams defense for this year. The best thing about him is that he makes plays in key time situations. In week four, Buie made the play to seal the win for the Rams when he intercepted a pass in the 21-18 win over Franklin Parish. Everybody talks about the Neville defensive backs and they deserved to be highly talked about. The team has lots of D-I players in their backfield but people should also keep an eye on #15 for the Rams. Louisiana Football Magazine Editor and T.V. host Lee Brecheen believes that Buie is definitely somebody to watch for if you are playing football in the Monroe area.

“Corey Buie is one of the hottest defensive back prospects right now,” Brecheen said. “He is very underrated and is a big time sleeper in Monroe.”

Another strength to his game is that he plays full speed and loves to hit. He will even hit players that do not even have the football in their hands. This year must be a great year for defensive  backs especially in Monroe so keep an eye out for him this season. The Rams are currently 3-1 under Head Coach Robert Arvie which has already eclipsed the win total for the team last year. This could be one of the best bounce back seasons so far and with players like Buie, this team could have a really good season. We caught up with the standout defensive back from Richwood High School and talked to him about this season, last season, recruiting, and so much more in today’s recruiting interview!

Last year, Corey Buie wore the number 9 and is making the switch to the number 15 jersey number this year. (Photo provided by Corey Buie)

LAFM: Have you received any interests from colleges or offers? If so, who are they from?

I have no offers as of right now. I would love to have one.

LAFM: You are probably the biggest sleeper at defensive back in Monroe because of all of Neville’s defensive backs. Does that motivate you to prove to people that you are just as good as them?

Yes. That motivates me a lot. I feel that I am very underrated. I work just as hard as those guys if not harder.

LAFM: Last year, the team won only two games but it has won two games already this year. Why has the team played so well earlier this year?

We are more mature, focused, and serious about the game as a whole.

LAFM: What are the team’s goals for this year?

We want to win the state championship.

LAFM: What are your individual goals for the year?

My goal is to get as many offers as possible and to get 10 interceptions this year.

LAFM: You are really aggressive on the football field and like to hit. Where do you get your aggressive nature from?

I love being physical and it just comes natural to me.

LAFM: What are the strengths to you game?

Not being over aggressive on plays

LAFM: What is the game that you are looking forward to playing this season and why?

Wossman because I feel that I didn’t do enough to help my team win that game last year.

LAFM: What college or NFL player do you model your game and why?

Josh Norman (former cornerback with the Carolina Panthers currently with the Washington Redskins) because he has his own swagger and is very physical.

LAFM: Is there anybody in your family that has played high school, college, or even professional football? If so, who are they and where did they play?

LAFM: Who are some people that you need to thank for putting you in the position that you are in today?

my father Charles Buie and my grandma Dollie Buie

LAFM: What separates you from all the other defensive backs in the state?

I am more physical, stronger, smarter, and tougher.