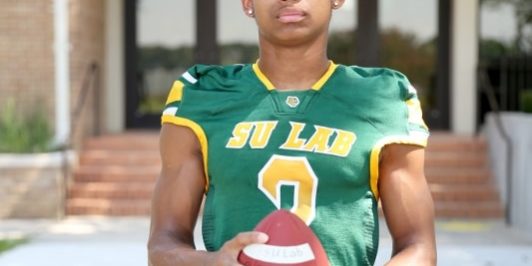 Southern Lab has some of the best athletes in the state. They are one of those teams in Louisiana that is loaded with talent from top to bottom. One of the very talented football players for the team is ATH Xavier Bell. Bell is one of the fastest players in the Baton Rouge area. This is a guy who is not just very fast but very gifted as well. Bell is not the biggest guy in the world at 5’9 but he plays much bigger than what his size indicates. He is super tough and is not afraid to take a hit. This is a perfect example of what a Swiss army knife would look like as a football player. Bell can play anywhere on the football field as a wide receiver or a kickoff return specialist. Even though he does not touch the ball as often as a lot of his counterparts, Bell is very dangerous and one of the most explosive playmakers on a very talented Southern Lab football team. Southern Lab Head Football Coach Marcus Randall has a very good problem in figuring out who to give the ball to as he has some great skill position players including Bell. Randall has nothing but praise for his star athlete Xavier Bell.

“Xavier Bell is an explosive two sport athlete with great speed,” Randall said. “He is a player that can play multiple positions due to his speed and ball skills. He has made big plays not only on offense but on our special teams as a return specialist for us. His leadership has done wonders for our team this season especially after losing 18 seniors from last year’s team. Xavier will finish this season on a high note and I am looking forward to seeing him on Saturdays.”

Not only a great and versatile player, Bell is one of the leaders for this team. Coaches love guys that are multi talented and want to be successful and Bell is one of those guys. Louisiana Football Magazine Editor and T.V. Host Lee Brecheen truly believes that he is a special player as well.

“He is one of the fasted and most gifted guys in Baton Rouge,” Brecheen said. “His ability to cut on a dime is very special. Bell is only 5’9 but is super tough. He doesn’t get the ball a lot because of the talent on the team but he is a big time recruit for the I-AA level and can actually play for some small D-I schools like ULL or Louisiana Tech. If you’re a college coach, I would definitely look at him as a slot receiver or a return specialist.”

We caught up with the athletic Xavier Bell from Southern Lab as he talks about the start to the season, last year’s championship game, recruiting, and so much more in today’s recruiting interview!

Southern Lab Receiver Xavier Bell stiff arms a St. John defender and runs for a big gain which is a position that you don’t want to put your defense into. (Photo provided by Xavier Bell)

LAFM: What’s your name, age, position and school you play for?

LAFM: Have any colleges offered you any scholarships? If not, have you received any interests from schools? What are those schools?

I have a scholarship from Tulane and Northwestern State.

LAFM: Does every game come easier for y’all knowing that the team has won a championship before?

No sir. We can never underestimate any of our opponents. We play ever game one at a time and we try to go 1-0 every week.

LAFM: This year, the team started as the number one team in the state and the team is 4-2 as of right now, which is a good record but what is the team’s expectations are the early start?

After starting of 4-1 early this season, we were looking forward to playing IMG Academy, but the game was cancelled because of weather issues. I think that this makes us even hungrier to accomplish our first goal, which is winning district and then down the line winning state.

LAFM: You are not the biggest player on the team at 5’9, 160 but you are really explosive and fast. Where do you get your speed from?

I wanna thank God for the talents he has blessed me with. I also have been working on these talents to enhance them even more. I’ve been running track since I first moved to Baton Rouge from New Orleans in 2005 after Hurricane Katrina. My summer track coach, Coach Kenny, has played a large part in my speed getting it to where it is today. I’ve also been running track at Southern Lab with a great coach in coach Henry Combs so all theses things play a part in developing my speed.

My strengths as a WR is that I can use my speed to beat defenses over the top, but I’m also deadly in the short game. I can take a six yard hitch for 70 yards. I have also mastered my routes so it would be very hard for a defender to play me one on one.

As a football player, I’m always working on every area of my game. The things that I’m already great at, I like to work on them to make them even better. I love to work on my blocking because as a receiver, we love to make plays and catch the ball but we have to block so that other plays will be successful.

Some of my individual goals are to have double digit touchdowns, 1,000 receiving yards, and to be named All-State.

After a long season and winning state, I like to give my body a break but after that, I start to get ready for track to defend my 4x crown in the 400 meter dash.

I like to get a good meal in my stomach, listen to some good music, and talk to the man upstairs for protection.

LAFM: If you had to compare yourself to a college or pro football player, who would it be and why?

I like Steve Smith (former NFL Pro Bowl receiver for the Carolina Panthers currently with the Baltimore Ravens) because he’s not the biggest receiver, like myself, but he still makes great plays and is one of the best.

LAFM: Is there any teammates or coaches that you like to give a shoutout to?

I would like to give a shout out to my head coach Marcus Randall, Coach Erick who has been helping with my technique, Coach Kenny ,my old track coach, and I would like to give my long time teammates Titus Nelson, who plays for Zachary, Shannon Forman, Chad Brown, and Charles Thortan who all play for Southern Lab.

LAFM: Is there anybody that you need to thank for putting you in the position that you are in today?

LAFM: What do you want to tell all the high school and college scouts reading this article?

For all the scouts getting a chance to read this, I think it would be a good experience to come out and see me and my team play on a good Friday night under the lights.