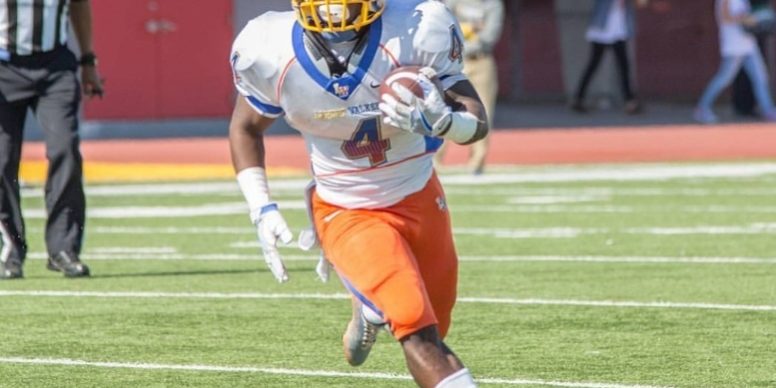 The Landry Walker Chargin’ Bucs clinched their first state championship this season against football powerhouse West Monroe. Of course, people talk about the play of QB and Mississippi State early enrollee Keytaon Thompson and deservingly so, as he was arguably the best player in the state this year, but just like any great player, he needed a sidekick to help him out and take the focus away from him. That sidekick had to be the dynamic do-everything running back and wide receiver Tevin Bush. Both guys are great football players, but both come in different packages. Thompson is over 6-4 and 210 pounds while Bush is much smaller at 5’6, 170 pounds. What Bush lacks in size, he makes up for it with his versatility, quickness, speed, and his toughness. All of those qualities led Bush to an outstanding career playing for the Buccaneers. Throughout his career, Bush has had over 2,500 yards of total offense and 29 total touchdowns as well as being named on the 5-A All-State team and our 2nd All-Louisiana team in the pre-season. Also, he helped Landry Walker accomplish their first state championship since the school merged in 2013 with L.B. Landry and O.P. Walker. Not bad for a player that only touches the ball about ten times per game. Louisiana Football Magazine Editor and T.V. Host Lee Brecheen had this to say about the dynamic athlete.

“Tevin Bush is very underrated,” Brecheen said. “He is quick and really athletic. Bush is not a big kid but makes up for it with his toughness, high football IQ, and great moves in space.”

Tevin Bush has been compared with Tavon Austin because of his playmaking ability and similar size and is now going to the same college as Austin to West Virginia. Unlike other big time prospects, he has been committed to West Virginia since late in his junior year and is now ready to become the next great Mountaineer for Dana Holgorsen’s program! We caught up with the electrifying Tavon Bush as he talked about his high school career, his teammate Keytaon Thompson, winning the state championship, comparisons with Tavon Austin, West Virginia, his famous relatives who also started their football careers at O.P. Walker High School, and so much more in today’s recruiting article!

Landry Walker ATH Tevin Bush does not touch the ball as often as other running backs but when he does touch the ball, he is always a threat to score. (Photo provided by Tevin Bush)

LAFM: What are your stats and accomplishments while at Landry Walker?

LAFM: You have committed to play at West Virginia. You are really similar in size as Tavon Austin. Is he the main reason and the way West Virginia used him that has attracted you to commit there?

Yes. The way they used him in the offense and special teams is something that has definitely attracted me to the program.

LAFM: As an all-purpose running back, what is the area in your game do you feel that you are strongest at whether it is running, receiving, blocking, and why?

Running because it is a lot easier to get the ball.

LAFM: Which area to your game that you are still trying to improve on?

I need to improve on my blocking as a running back.

LAFM: This season, you helped Landry Walker win their first state championship. What was that experience like for you to help the school accomplish that feat?

It was great because I was there in the start when everybody said that it won’t work.

LAFM: What was the best game that you had while at Landry Walker and why?

My best game was this past year against Edna Karr. I had over 160 yards of total offense and three touchdowns.

LAFM: You and Keytaon Thompson were electric on the field together. What is the relationship between you two on and off the field?

We are best of brothers on and off the field.

LAFM: What other sports do you play besides football?

LAFM: Who are some artists that you like to listen to before the game?

Meek Mill, GB White are the artists that I listen to before a game.

LAFM: You dealt with the recruiting process while in high school. What advice would you give to other players who are dealing with the process?

In the start of your recruitment, it won’t go how you want it to unless you have been looked at since middle school, but as time goes on, just let everything develop and keep grinding, the scouts will come.

LAFM: What makes High School football in New Orleans special in your own words?

The fact that they have an edge because of the background of some of the players that come from the area.

LAFM: Let’s talk about your career. You had almost 3,000 yards of total offense, 29 touchdowns, 5A All-State, State Champion, etc. How will you look back at your high school career?

I think I went out with a bang. Winning a championship and putting up numbers with only touching the ball eight times a game is pretty incredible.

LAFM: There are some great running backs in the state. What makes you standout from everybody else?

I standout because I will ALWAYS make the last man miss.