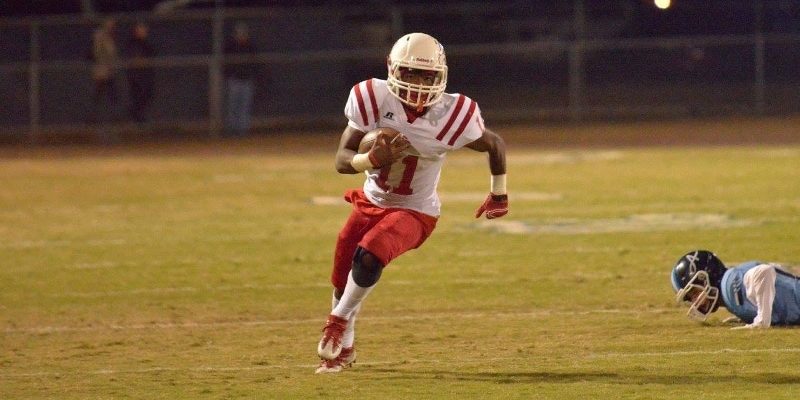 Once again, Central Catholic was a championship contender this past season under the leadership of Head Coach Tommy Minton. Even with the loss of star running back Stefano Guarisco, who is at Nicholls, the Eagles returned a lot of great players including 16 starters. Two of those starters would go on to sign on National Signing Day. The main star was Louisiana Lafayette signee Ja’len Johnson, but the other talented player that signed on National Signing Day was ATH Samarick Paul. If we had a comeback player of the year award, Paul would have definitely been one of the top candidates. Unfortunately, Paul tore his ACL in his junior year forcing him to miss the entire season. However, that injury did not affect his senior season at all. Samarick Paul had a huge final year for the Eagles showing his versatility. He had over 700 yards and three touchdowns receiving as well as over 200 yards rushing and three more touchdowns. Paul also gets the job on defense as well as a very good defensive back. If that is not enough, Paul also saw time at quarterback last season. All of those accomplishments led to his best season while at Central Catholic. The crowning moment, for Samarick Paul, was when he was named on the LSWA 1st Team All-State Team for 1-A. It indeed was a big bounce-back season for the versatile athlete. The season could have been even better for the Eagles, but the team lost to Ascension Episcopal for a chance to go to the state championship. Even with the loss, Samarick Paul enjoyed his senior season with his teammates and is glad that he was able to play one more year with his teammates. Paul received some interests from other schools, but in the end, he chose East Texas Baptist University to continue his football career. With the skills that Paul possesses, he could do a lot of great things for the Tigers. In today’s recruiting article, the do-everything player from Central Catholic talked about coming back from the ACL injury, his senior season, his teammates, committing to East Texas Baptist University, and so much more!

Central Catholic ATH Samarick Paul has played multiple positions this season and is a threat every time he touches the football. (Photo courtesy of Valerie Leblanc)

LAFM: What are your accomplishments while at Central Catholic?

LAFM: You had a great senior season after your torn ACL injury in your junior year. How excited were you just to be back with your teammates and play another season with those guys?

It felt great being back out on the field with those guys. I had a great relationship with them all, and we had each other’s back and had the same mindset and goals for the season.

My strengths would be my speed, my ability to catch the ball well, having a quick first step, and running efficient routes.

LAFM: What are some areas that you need to improve on at the next level?

I need to improve on my footwork as well as continuing to gain confidence on cutting on my knee.

LAFM: You have committed to East Texas Baptist University. What is it about the school that attracted you to go play football there?

East Texas Baptist University has a spread offense so they throw the ball a lot as well as running the ball a lot. The coaches are young so they can relate because they have been in the same shoes as me not too long ago. What ETBU stands for and the things that they want to build really caught my attention. It’s far enough from home and also close enough for my parents to get me if something was to happen. Over there, everybody is somebody not just a number.

LAFM: The team was really close to going to the Superdome this season. How disappointing was the loss for you personally to Ascension Episcopal?

It hurts bad because, as a senior and a leader of the team, the goal was to get to the Superdome and compete for the state title, but we fell short. I felt like I let the team down and it was the last time that I would get to play them.

LAFM: If you had to pick any Louisiana high school team to play against for one more game, what team would you pick and why?

Ascension Episcopal, because it’s a team that I know we can beat. They were the only team that I felt gave us competition and made us play to our full potential.

Central Catholic ATH Samarick Paul shows off his skills a wide receiver in this game against Ascension Episcopal. (Photo courtesy of Valerie Leblanc)

LAFM: Ja’len Johnson is another great player on the team. What is your relationship on and off the field with him?

We have a tight relationship both on and off the field. He has my back, and I have his so whatever happens, I know he is going to be there.

Tavon Austin (former West Virginia Wide Receiver currently with the Los Angeles Rams). He is fast and is very undersized just like me. He does not use that as an excuse and goes out and uses his abilities to make plays. He is a great player both on and off the field.

LAFM: You played multiple positions for the team this year. What position is your favorite to play and why do you want to play that position in college?

Wide Receiver. You make many plays, score touchdowns, and can look good while doing it. Receivers also have the best swag on the field.

LAFM: What was your best game while at Central Catholic?

My best game was against Lafayette Christian this year in the first round of the playoffs. That was my best game because I did a little of everything that game, and I had the opportunity to put the team on my back. Being a big contributor to winning that game against a team that beat us earlier in the season was big.

LAFM: Who was the toughest player that you ever played against?

Everyone I faced really didn’t give me a challenge. I believe that nobody could hold me.

LAFM: What makes playing at a program like Central Catholic special?

At Central Catholic, everyone is someone. We have great coaches that back us, and we are provided with everything that we need. Also with being at a Catholic school, we always have God by our side on and off the field.

First, I would like to thank God for blessing me with the ability to play sports and be an athlete. Without him, nothing is possible. I also like to give a shout out to my parents, all my coaches, and friends that stuck by me through everything.

Bowling was actually my first love.

LAFM: What separates yourself from all the other playmakers in the state?

My will and determination to get the job done no matter what it is separates myself from all the other playmakers. I always want to be the go-to-guy in any situation. I may be smaller than a lot of other guys, and some guys may be better than me, but no one will ever out work me.