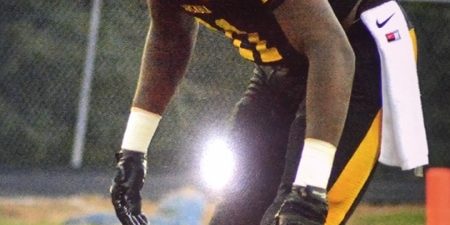 Arcadia High School had experienced one of the best comeback years that you will ever see in high school football. Coach Dimitri Carr has done a great job of rebuilding the program in which two years ago, the team only won two games in the season. Last year, the Hornets improved drastically with a 10-4 record and came one game away from going to the state championship game. You may ask yourself how did the team improve that drastically over the two year period. Well, the answer can be great coaching and great football play by some great two way football players like OL/DL Dustin Mills, who we did an article earlier this year, and Athlete Anthony Boston who plays both cornerback and wide receiver. Arcadia High School Head Coach Dimitri Carr has nothing but great things to say about his star football player.

“Anthony Boston is an all around player,” Carr said. “He is one of those guys who excels at everything he does. He is also very discipline, hard working and takes good care of his body. There are a lot of 1-AA schools looking at him right now like Southeastern, Grambling, and Northwestern State. I expect him to play defensive back at the next level.”

The thing about Boston is that he can play defensive back at the next level but he can also play wide receiver. Usually, defensive backs panic when the ball is in the air and they are covering wide receivers. However, Boston is very discipline in his coverage like Carr said and does not panic and makes plays on the football. Boston is definitely one of the key players for the Hornets in the last couple of years and a major reason why the Hornets turned around the program the way they did. Now, in his senior season, Boston and the rest of the Hornets have a chance to make the next step and go to the state championship. To go from playing on a 2-10 team at the start of the year to a championship contending team is a huge story no matter how big or small the school is. Today, we caught up with the Arcadia athlete to talk about the season, last season, offers, the big game this week, and much more in today’s recruiting interview!

My name is Anthony Boston Jr but everybody call me “AJ”.I’m 17 years old and I Play WR,RB & DB For Arcadia High School.

I got two offers from Alcorn State & Louisiana College,but got some interest from Grambling State, University Of Louisiana at Monroe & Northwestern Right now..

LAFM: Which position do you enjoy playing more wide receiver or cornerback and why?

My strengths as a defensive back are my ability to play the ball in the air, my instincts and the way I bring A hit. My strengths as a wide receiver are explosiveness on offense and my soft hands.

LAFM: What are your weaknesses as a football player?

My weakness is I think I could get my footwork better.

LAFM: What is your favorite college or pro team to watch and why?

My college team that I like to watch is Penn State because of Marcus Allen (defensive back for the Penn State Nittany Lions). I like how he defends and brings a pop to the ball carrier. My favorite pro team is the Denver Broncos. They have a great defense and corners that I try to model my game after.

LAFM: Last year, the team went 10-4 and went far in the playoffs. This year, the team is off to a good start once again going 2-1. How does the team block off the big time expectations for this year and still play well?

Last year was a great year indeed but we wanna focus on this year by going farther than we did last year by winning a state title.

LAFM: What game are you looking forward to playing the most and why?

Haynesville because they put us out last year and we want revenge. My team and I want to make a statement around Louisiana that anybody can be beat!

LAFM: Which college or NFL football player do you like to compare yourself with the most?

On defense, I like to compare myself to Patrick Peterson (former LSU All-American cornerback and current Pro Bowl cornerback for the Arizona Cardinals) by the way I lock down on defense and return on special teams. On offense, I model myself after Tavon Austin( former West Virginia wide reciever currently with the Los Angeles Rams) because I can line up anywhere and be a playmaker.

LAFM: Who is the toughest wide receiver that you ever had to cover and why?

Texas A&M commit Keldrick Carper (who plays for Plain Dealing) because of his length, size, and explosiveness, but I enjoyed covering him.

My goals are to become a known player all around the country, get District MVP, get All-State, and be a high school All-American.

I want to become a physical therapist to help players recover from injuries.

LAFM: Is there anybody in your family that has played high school, college, or even at the pro football level? If so, who are they and where did they play?

No sir. I was the first one in my family to ever play football. I came from a basketball playing family.

I play basketball for Arcadia High School and I also workout.

LAFM: Is there anybody that you want to give a shout out to for helping you be the player and person you are today?

I will like to give a shoutout to God for giving me the abilities I have. My teammates and coaches for pushing me to my higher abilities as well as my family & friends for sticking with me and keeping me on the right track.

LAFM: What would you like to tell all the college scouts and coaches reading this article?

I’m A.J. Boston and I will bring a winning attitude. I will work harder than you will ever think and most of all, I will be a great addition to your team!