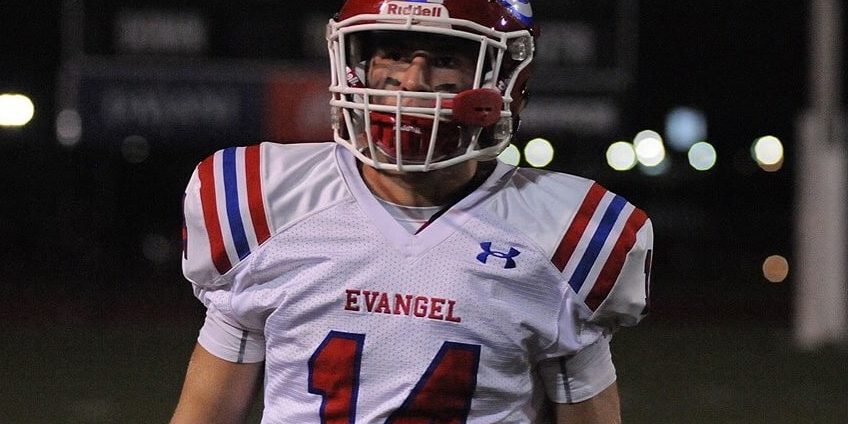 Evangel Christian Academy WR/FS Tanner Ash is a great football player because he can play both sides of the football and can beat you from any position. Tanner is one of the best returning players in the state and can help give Evangel Christian Academy a spark that will help them go a little further than last year when they lost the state semi final game. Tanner is a very good wide receiver and is versatile enough to play at any position. Just ask our recruiting guru Lee Brecheen and he will tell you that Tanner is maybe the most underrated player in the state. “Tanner’s a big time sleeper. He is tall and aggressive. Tanner plays receiver and he also moved to play defensive back. He reminds me of Weston Steelhammer  (former defensive back for Calvary Baptist and is now All MWC defensive back for Air Force). He’s a phenomenal player and can play any position,” Brecheen said. In today’s recruiting interview, Tanner talks about his years at Evangel Christian Academy, offers that he has received from colleges, his comparison to Weston Steelhammer, and the heart breaking finish in the semi-finals to Catholic High BR and how the team will rebound this year! 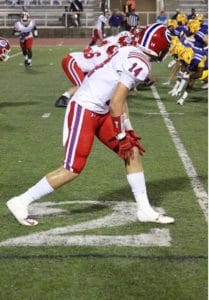 Tanner Ash lines up at wide receiver against C.E. Byrd where he had his best game catching 9 passes for 168 yards and a TD

LAFM: If you play more than one position, which position do you like better and why?

Wide Receiver. Being able to make plays and big catches in big time situations has always been my thing. I love scoring TDs.

LAFM: What football camps did you attend over the summer?

LAFM: How many offers have you received so far? If so, by whom?

LAFM: What are your strengths as a WR?

My separation out of my routes and my Aggressiveness to go up and get the ball.

I can improve on getting to know the defense a little better pre snap.

LAFM: Evangel Christian lost a very close game to Catholic High in the semifinals last year. How bad was the feeling last year of being a step away from playing in the dome?

The feeling was unexplainable. It was worse than misery. To know that we had it all in our hands and just lost it was unbelievable. It almost seemed like it wasn’t true.

LAFM: What does the team need to improve on this year to not let that happen again?

Based off of that last game, we have to play the full 48 minutes every game. Cant play 46 or 42 minutes. We have to play EVERY play. We gotta finish also. Finishing has been something we have struggled with.

LAFM: Who is a player on Evangel Christian that we don’t know now but you think can have a breakout year?

Patrick Jones and Josh Walker(our two corners). They are unbelievable.

LAFM: What was your best game at Evangel Christian Academy?

LAFM: Who is the best player you faced last year and why?

The corners for Bishop Dunne (high school in Texas) were unreal athletes.

LAFM: Which player do you model your game after and why?

Trent Taylor (Wide Receiver from Louisiana Tech) always has been my boy. He’s a little bit smaller than me but he showed me that you can do anything if you put your mind to it. He’s an incredible athlete.

LAFM: Lee Brecheen, our recruiting guru said that you remind him of Weston Steelhammer, who plays for Air Force as a defensive back and who used to play for Calvary Baptist. What are your thoughts on the comparison?

I remember watching Weston play against Evangel when I was in middle school. He was an absolute dog. Being compared to him is definitely an honor. However, I gotta keep working day in and day out busting my butt.

LAFM: Which teams on the schedule this year are you looking forward to playing the most and why?

Allen, Texas. First game of the year. BIG environment change from our stadium to theirs. It’s going to be fun!

LAFM: Evangel Christian Academy is one of the best high school football programs in the state and has produced a lot of college and NFL players like Josh and John David Booty(former NFL QBS), Jacob Hester (former LSU fullback from 2004-2007 and former NFL fullback with the Chargers and Broncos), Brock Berlin (former QB for University of Florida and University of Miami and former NFL QB), Jamauria Rasco (former LSU DE and current NFL player for Green Bay Packers), and even your coach Byron Dawson (f0rmer LSU defensive lineman). What does it mean for you to put on the same uniform as these guys did in the past?

It’s honestly a blessing. To see the path of greatness you have just by putting on the uniform is second to none. It’s an honor to have what we have because of those great players today and I couldn’t be more thankful.

My father Bubba played for Southwood High School and then played at ULM when they were Northeast. He had a couple of  NFL teams talking to him until he blew his knee out! My brother Braylon plays for Loyola University!

LAFM: What separates you from any other wide receiver in the state?

I’m willing to work whenever and wherever. I know I’m not the fastest or the strongest, but if my technique is perfection, no one can stop me. It’s all a mindset.