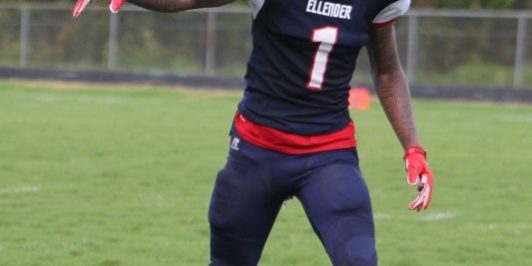 When you look at two sport athletes, you look at Bo Jackson (NFL and MLB) or Deion Sanders (NFL and MLB). Now a days, there are not many athletes who play two sports at the next level. When an athlete usually excels at two sports, that athlete will ultimately have to choose one in the end. That is usually the case but do not tell A.J. Ellender WR/FS Davontavean Martin that. Martin has verbally committed to play football and basketball at Tulane University. Before becoming a two sport star at Ellender Memorial High School, Martin used to attend South Terrebonne High School in his first couple of years in high school but moved to Ellender Memorial High School where he instantaneously became a star athlete for the Patriots last year. Now, in his second year, Martin looks forward to the challenge of being a playmaker not only on the gridiron but the basketball court as well. Louisiana Football Magazine Editor and T.V. host Lee Brecheen is excited to see the star wide receiver and free safety play.

In today’s interview, we asked Davontavean Martin about balancing his two sports: football and basketball as well as his previous school experience at South Terrebonne High School compared to his current school Ellender Memorial High School. He also talks about this year, last year, his football role models as well as the wide receiver in the state that impresses Davontavean Martin the most in today’s recruiting interview!

LAFM: What’s your name, age, position(s), and school you play for?

LAFM: What were your stats and accomplishments as a football player?

I am committed to playing both football and basketball for the Tulane Green Wave.

LAFM: You played at South Terrebonne and now you are playing for Ellender High School. What made you change schools and how different are the two teams that you played for?

I moved out of the South Terrebonne area so I had to go to Ellender.  It’s different because the people I grew up with all go to Ellender which makes it better for me.

LAFM: Last year, the team missed the playoffs. What are the team’s goals this year after only winning two games last year?

We want to reach the playoffs and make some noise this year.

It’s been great because I already had him as a coach with South Terrebonne and already knew what to expect. The team loves him because he has that good energy and winning attitude.

LAFM: Lee Brecheen, our scouting expert, believes that you are one of the best wide receivers in the state. Is there somebody that plays your position in the state that you believe is just as good as you?

Devonta Smith from Amite High School. He is really good and I have seen it with my own eyes.

I like the jump balls because I feel that most of the defensive backs can’t jump with me.

I need to improve on my route running. It is not where I want it to be because I have been playing both QB and WR .

LAFM: What are some of the things that you take from the game of basketball that helps you with football?

My quickness on the basketball court really help me in football.

LAFM: Who is the defensive back that you are looking forward to playing the most and why?

Hopefully we will get to the playoffs because it is really not the defensive backs in this areas that I know.

LAFM: If you had to compare yourself to a college or NFL wide receiver, who would it be and why?

A.J. Green (former receiver for Georgia and current receiver for the Cincinnati Bengals) because of my body type with the ability.

LAFM: What is an interesting fact about yourself that no one knows about?

I enjoy listening to rappers before games.

Both my mom and dad played sports in high school.

LAFM: Is there anybody in your family that you like to thank for putting you in the position that you are at today?

I would like to thank my mom and dad for letting me play the sports I love early on.

LAFM: What would you tell any college football coaches if they are reading this article?

I appreciate every college coach who recruited me and gave me an opportunity.