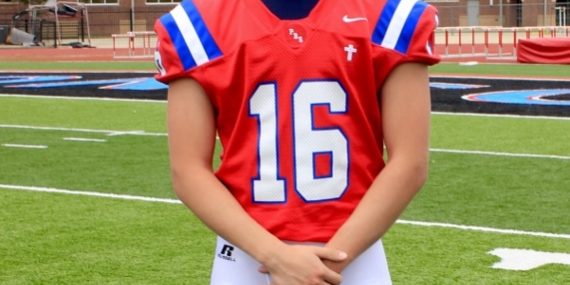 Parkview Baptist WR/SS Caleb Meaux is one of the fastest and explosive high school football players in the Baton Rouge area. Just like WR/SS Tanner Ash, who also plays for a football powerhouse in Evangel, can make plays as a wide receiver and a defensive back. Caleb Meaux has great ball skills. Just look at his stats from a season ago. He intercepted 8 passes last year and showed his playmaking ability returning one of those interceptions for a touchdown. Caleb Meaux is a great athlete and has a chance to prove scouts what a great football player he really is. “Caleb’s a fast kid,” Lee Brecheen said. “He has very underrated speed and his dad played baseball at Northwestern so he has athletic ability. I believe Caleb can play in the 1-AA college level.” Read more about Caleb as he talks about the offseason, his career at Parkview, and how he is  going to help Parkview Baptist win a championship for the second year in a row! 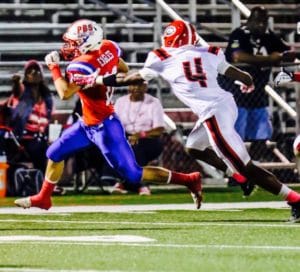 Caleb Meaux shows off his playmaking ability after intercepting a pass in a game against Glen Oaks.

LAFM: Did you go to any football camps over the summer?

Yes, I went to the LSU satellite camp and also went to the LA Tech camp and I’m planning on attending a Texas A&M camp, Northwestern, and Tulane camp in the future.

LAFM: Do you have any offers from colleges? If so, where?

I do not have any offers.

LAFM: How is the recruiting process been treating you?

It has been a very exciting process! Getting to meet all the college coaches has been a great experience for me.

LAFM: What is some advice that you would give to some of your teammates about recruiting?

Do not take it for granted. Very few people get to have the experience that you are having right now. Go out every practice, every game and give 100% effort every rep, every play because you never know when it is going to be your last.

LAFM: You play wide receiver and free safety. Which position do you like playing better and why?

I enjoy playing defensive back more! Our defensive is really close and have been playing together since we were little so it’s never a dull moment during games or even at practice.

LAFM: Which position do you think you will play in college?

I think I will play defensive back in college.

LAFM: Describe to us what it feels like bringing another state championship back to Parkview Baptist.

There’s not a greater feeling. Growing up going as a kid and going to all the state championship games will always be some of my greatest memories and now I was able to live it. It was always a goal of mine from middle school to high school and now I can say I actually did it.

LAFM: What does the team need to do in order to repeat as state champions?

We do not need to be satisfied with just one. We need to continue to work hard every day like we already do.

LAFM: What was your best game at Parkview Baptist?

My best game was against STM (St. Thomas More) in the state championship. I also played really well against Catholic and U-High.

LAFM: The team has a really tough schedule in the early part of the season facing teams like Catholic High, John Curtis, Riverside, etc. What is the key for the team at least going 2-1 in those three games?

Studying the game plan and every player and giving all they have every play.

LAFM: Which one of those teams are you looking forward to on your schedule?

LAFM: What is it like playing under Jay Mayet after he replaced a coaching legend like Kenny Guillot?

I never really was able to play for coach Guillot, but coach Mayet has been a great role model for me and has helped shaped into the man I am now.

LAFM: What college or NFL player do you model yourself after and why?

On the field I try and model myself as Patrick Peterson or Tyrann Mathieu. Both those guys give so much effort on the field and I try and give all I have every play.

LAFM: Is there anybody that you need to thank for that put you in this position that you are in today?

My goal is to bring back another state championship because we have never won back to back championships.

LAFM: What separates you from any other athlete in the state?

My effort and my leadership on and off the field separates me from any other athlete in the state.