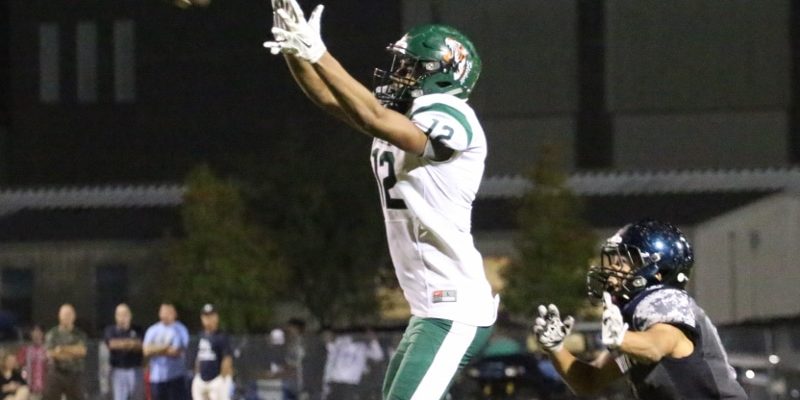 Slidell Wide Receiver Terry Baham III is probably the best wide receiver in the state that nobody talks about. He has great hands and has a basketball frame at 6’4. Watching his highlights, he can jump and attack the football better than probably anybody in the state. He had just over 30 catches, but whenever Baham catches the football, it is going to be a huge play. In those 37 receptions last year, Baham averaged over 20 yards a catch which is pretty incredible. As good as he was last year, Baham is looking for improvement for this year to build on the season that he had last year. Louisiana Football Magazine’s Lee Brecheen thinks that everybody should keep an eye out on the tall and talented receiver from Slidell. “Terry Baham III is the most underrated wide receiver in the state,” Brecheen said. “He and Brandon Rachal (Natchitoches Central) have the best hands in the state. Baham is very aggressive in attacking the football and that is due to the basketball background. He doesn’t have any offers yet, but when the time that this year is done, expect a lot of offers coming Baham’s  way.” The team went 2-8 last year but it wasn’t because of lack of talent. It was players not staying healthy but with everybody returning this year ,including Baham, don’t be surprised if Slidell is one of the breakout teams for this year with the offensive talent coming back.  Read more about the underrated receiver as he talks about the season last year, his expectations this year, his best play that he has ever made in a Slidell uniform, and even more in today’s recruiting interview!

Terry Baham (12) shows off his athletic ability in this game against Northshore. Expect more catches like this from Baham this upcoming season.

LAFM: Did you went to any college camps over the offseason? If so, what camps did you attend?

I did not any attend college camps over the summer.

LAFM: Do you have any offers from any colleges? If so, who are they from?

I currently do not have any offers.

LAFM: Last year, you made big plays at the wide receiver and you would jump over people to catch the ball in the air. What makes you so good at going up over defensive backs and catching the football and making it look so easy? Is it natural talent, hard work at it, etc?

I definitely put in a lot of hard work and practiced many different situational catches.

LAFM: What was the best game you have played at Slidell and why?

I believe it was the Fountainbleau game because with the odds against us, I had  some big plays that helped win the game against a good team.

LAFM: I also heard that you made a really good catch to help the team beat Fontainebleau. Tell us what happened during that play.

Before the play, Wayne Griffin and I agreed that a big play was needed. We trusted each other enough to get it done. The defense had good coverage so Wayne threw the ball up where I could make a play on it. I had to reach over the corner and pull the ball out of the corner’s hands, side stepped the other defender,  and had to beat the safety from the opposite side of the field to the end-zone, diving and hitting the pylon.

LAFM: What are things that you feel are your strengths at the wide receiver position?

I have a big body, good hands, and I have an innate ability to judge the ball.

LAFM: What are aspects to your game that you need to improve on?

Being more efficient on the route tree.

LAFM: Last year, the team went 2-8 but the team suffered a lot of injuries. Everybody basically returns so what is the expectation for the team this year?

Our expectations are to stay healthy, work as a team, to win as many games as possible, and to get to the playoffs.

LAFM: What are your individual goals for the year?

To do my best to help my team win and be a team leader.

LAFM: There are a lot of weapons in the offense. Wayne Griffin, Tito Simmons, and St. Thomas More transfer Tre’ Reed are a couple to just name a few. What is it like to play with those guys?

It’s great because they work hard everyday, and they are extremely competitive.

LAFM: Who else do you think will have a breakout year on the offensive side of the football?

I believe everyone has an equal opportunity to have a breakout season.

LAFM: When football season is over, what do you like to do?

LAFM: Who was the best defensive back that you played against last year and why?

I have to say Clifford Chattman from McDonogh 35 and current safety for Texas A&M. He had a big body like mine and he was fast and physical.

LAFM: Is there anybody in your family that has played high school, college, or even pro football? If so, who are they?

I do not watch professional sports.

LAFM: What separates you from any other wide receiver in the state?