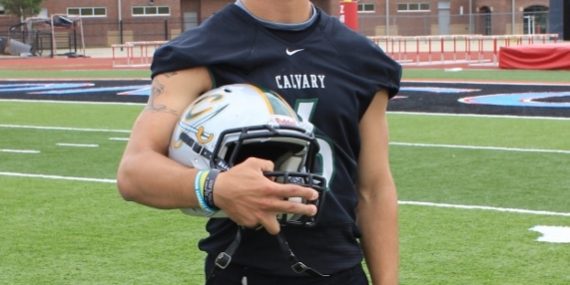 Every football player that I have written an article on either wants a career in football or is pretty unsure what they will do after their football career is done. Calvary Baptist Wide Receiver Nicholas Dantes already knows what he wants to do and that is be on America’s greatest team. A lot of football fans would guess the Pittsburgh Steelers or the Dallas Cowboys or the San Francisco 49ers. While all three are some of the NFL’s most successful teams, I am not talking about those. I am talking about the military. Dantes is an interesting guy. When other teenagers are relaxing and going to the beach, Nicholas Dantes is going to military camps and working hard so he can have a long career with the American military. He was at Fort Benning, Georgia doing basic combat training. How many other teenagers can say that? As an athlete, Nicholas Dantes also has an interesting story. He started his athletic career at Evangel Christian Academy and then transferred to Calvary Baptist which is another football powerhouse in Shreveport. Not many teenagers can say that they have played for two of the state’s top football programs. From being involved with the military to playing football, Dantes has definitely had an interesting life and still has a lot of more years  to live it and enjoy it. Not many kids at this age know what to do with their life and Nicholas Dantes definitely knows what to do with it. He is also a football coach’s dream player and that is somebody who is willing to fight for his teammates and be a leader for the team. With basic compact training experience, Dantes is not only in shape physically but also mentally which helps everybody else look up to him with that strong mindset. He is not only a great athlete but is even a better person. Dantes was chosen to wear Calvary Baptist’s #30 jersey this year which is the equivalent to LSU’s #18 jersey or Texas A&M’s #12 jersey. Even though, this is his last year playing football, he knows that he will give everything he has for his senior year, and you want guys like that. He also had to sit out a year which motivates him even more to have  a great senior season. Our very own Lee Brecheen loves the mindset that Nicholas Dantes has and he also says that he would love to have a guy like him on his football team. Knowing that Nicholas Dantes is one of the courageous men that is willing to fight for our country makes be proud to be an American. Check out today’s recruiting article as Nicholas Dantes tells his great story from playing football at Evangel Christian and Calvary Baptist and his military journey that he has taken.

Nick Dantes ,in his military uniform, getting ready for basic training. (Photo provided by the Dantes family)

Nick Dantes poses with his father Allen Dantes who also has a football background at Northwood. (Photo provided by the Dantes family)

LAFM: Did you attend any football camps?

No, I was at Fort Benning, GA conducting Basic Combat Training all summer.

LAFM: Do you have any offers from any colleges?

LAFM: You are recognized as one of the best kids in the state. What does it mean for you to be recognized in such a way?

For me, being recognized as one of the best kids in the state humbles me. It means to me that I must constantly uphold the highest standards of behavior and character, and lead by example whether I’m on the field, in the classroom, out in public, or even when no one is watching.

LAFM: What are you planning to do after high school? Do you plan on playing football, joining the army?

After high school, I plan on attending LSU, joining the ROTC program, and obtaining a major in military science as well as a major in computer information services. However, if given the opportunity or order to deploy, that will be my top priority, and I will work my schooling around deployments. After I finish with college, I plan on delaying my commission as an officer, switching over to the active duty army, and serving for a few years in the enlisted ranks before I accept my officer commission.

LAFM: You missed most of last year after transferring from Evangel Christian to Calvary Baptist. What happened and what’s your motivation to play the whole year this year for Calvary?

Two of my favorite quotes are “man makes plans and God laughs” and “the only thing you can count on not to change is the fact that things always change.” I welcome change into my life and simply work my hardest wherever I’m at. I love both schools, am/was completely happy at both schools, absolutely love my coaching staff and teachers at both schools, and have many friends at both schools.

Playing football for ECA and CBA isn’t actually that much different. Many of the coaches at Calvary are Evangel Alumni or were once affiliated with Evangel. Therefore, the practices are structured the same and the coaching styles are somewhat similar. Many of the mechanics and techniques taught are the same, and the standards on the type of football player, student-athlete, and man of God that we are expected to be are all alike.

LAFM: What are your strengths and weaknesses as a football player?

My strengths ,as a football player, I believe, are mental and physical toughness, fierce competitiveness, high standards of discipline, the desire to “lead by example,” and my love for my teammates as well as the school that I represent. I believe my weaknesses as a football player include not being quite tall enough or big enough, and needing to be quicker, faster, and stronger.

LAFM: Which college or NFL wide receiver do you model yourself in order to get better?

Trent Taylor from Louisiana Tech. Having played with him at ECA and watching him in college, he’s always been one of my biggest role models, not only as a football player and wide receiver, but also as a person of high-character.

LAFM: What is one thing interesting about yourself that we didn’t know about already?

I love technology and working with computers.

LAFM: Did any of your family members play high-school, college, or even pro football? If so, who are they and where did they play?

My dad played football at Northwood.

LAFM: Which team this year are you looking forward to play the most?

I love playing the game regardless of who the opponent is. Our coaches always tell us to play the game, not the opponent. The most important game in my life is the next game.

Honestly, I have no individual goals. I want my team to be as successful as possible. Whether that includes me catching sixty touchdowns, or blocking for my teammates while they do the scoring doesn’t matter to me. I guess the only individual goal I can come up with is to simply be the best I can be, so that I’m as useful as possible to my team.

LAFM: What are the team goals this year?

I believe the team goals this year are firstly, to glorify God. Secondly, to be tough, resilient, never quit, always fight on, and ultimately win state.

LAFM: If a college coach gave you the opportunity to play for a division one program, what would you tell him?

I would tell him that I was extremely grateful for the offer, as well as his time, but that I don’t see football in my future. After high school I plan to focus on my studies and what I’ll be doing with my life. All of my time and energy will be focused on school and training for my career in the Army Infantry.

LAFM: What do you plan to do when you are done with football as a career?

I plan to continue on with the plan that I’ve had for my life since I was very young. This includes a career in the military first as an enlistedmen, and then as a commissioned officer, with a major in something to do with computers (most likely CIS) to fall back on should something happen to me or for when I retire.