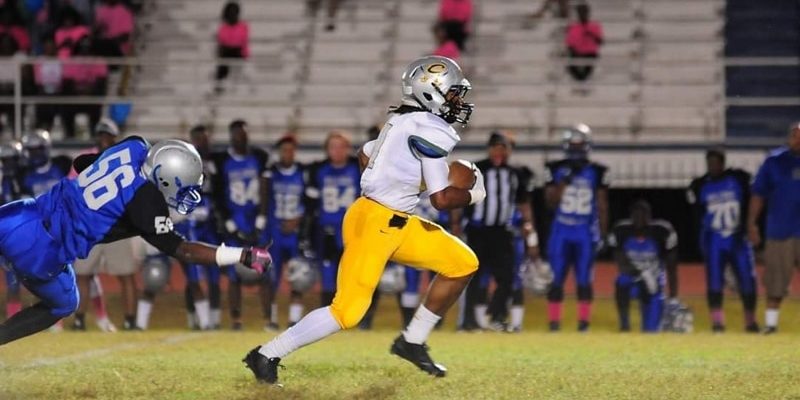 Calvary Baptist WR Kyle Jones is an exciting player as he is not one of the biggest guys on the field as he only stands 5’9 at 190 lbs but he is quick and explosive and is a threat to make a 5 yard gain into a 70 yard touchdown. He is quick enough and fast enough to outrun people at the same time has enough power to break tackles and run people over. Kyle Jones plays wide receiver right now but don’t be surprised if he changes positions in college. “Kyle is listed as a WR for Calvary Baptist but could be a running back in college,” Lee Brecheen said. “He is underrated and very athletic. Hunter’s also very fast and could return kickoffs and punts for a small D-1 school.” Kyle Jones has the versatility to play running back and receiver and could be Calvary Baptist’s secret weapon for the team to reach the state championship for the second time in three years. Meet Kyle in today’s recruiting interview as he talks about his versatility, last season, and his goals for this season!

LAFM: Do you have any offers from colleges?

LAFM: How has the recruiting process been treating you?

LAFM: Is there any advice you would like to give to any football player that has to deal with the process?

My advice is to keep the grades up and take the ACT.

LAFM: What other positions do you play? Which one do you like better and why?

Runningback. Because I can run people over.

LAFM: Which position do you think you will play in college?

LAFM: What are some strengths and weaknesses to your game?

My strengths are that I have a low center of gravity and that I’m strong. My weakness is that I’m short.

LAFM: Last year, the team won district last year and made it pretty far into the playoffs but lost in the quarterfinals to the eventual state champion Notre Dame. How disappointing was it not to repeat as state champions?

Very disappointing because we had a chance to fight but instead, we quit.

LAFM: What are the team’s goals this year besides competing for a state championship?

Our team goal is to bond and to have great toughness.

LAFM: Which team are you excited to play the most this year and why?

Notre Dame because we can get our re-match.

LAFM: Who is the best player you have played against last year and why?

Chanse Sylvie (former Calvary Baptist and current Oklahoma Sooner DB) because he was a hard worker.

LAFM: What college or NFL player do you model your game after?

LAFM: What was your best game in a Calvary Baptist uniform?

Zachary. It was on ESPN and it was one of my best games in high school.

LAFM: Is there anybody in your family that has played high school, college, or even the pros? If so, who are they and where did they play?

LAFM: Who are some people that you would like to thank for putting you in the position you are today?

LAFM: What separates you from any other wide receiver playing football in Louisiana?

I am an explosive player and I have great speed.