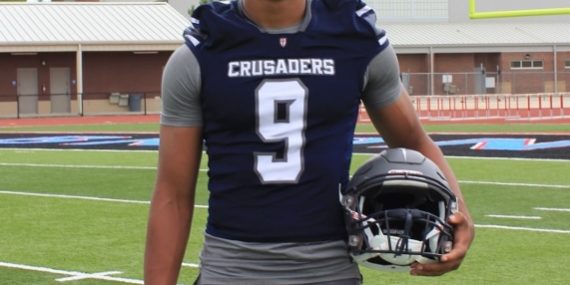 Christian Life Academy TE/DE Jason Briggs might me the best tight end in the state.  Briggs does everything that you want in a tight end. He is very athletic and is not just a wide receiver. Some tight ends can just catch and some are used just to block but Briggs can do both. He can also play on the defensive side of the football at defensive end.  Any coach would love to have a guy like Jason Briggs and that is a guy who is very competitive and doesn’t have a major weakness. Our recruiting guru Lee Brecheen loves what this tight end from Christian Academy can do. “Jason is the most athletic tight end that I saw in 2015,” Brecheen said. “He is tough, blocks well, has great hands, and speed for a big guy. There is no question that Jason Briggs is the complete package and could be the key player for Christian Life to breakthrough and play in a playoff game. In today’s recruiting interview, Jason Briggs talks about his skills as a tight end, the schools that are offering him, and this year’s expectations!

Jason Briggs (9) shows his athletic ability as he also plays defensive end for his team.

My name is Jason Briggs and I’m 17 years old. The positions I play are tight end and defensive end.

LAFM: What is your 40 yard time, max squat, and bench press?

LAFM: What is your gpa and act score?

LAFM: Did you attend any football camps over the off-season? If so, what are they?

LAFM: Did you receive any offers from colleges? If so, who are they?

I received a full scholarship offer from Jackson State University.

LAFM: What are the strengths to your game at tight end?

I believe my strengths are my good hands, route-running, and physicality.

Currently, I need to improve on my speed and agility on both sides of the ball.

LAFM: Last year, the team went 5-5 and missed the playoffs. How disappointing was it not to go to  the playoffs even though the team had a .500 winning percentage and what does the team need to go to the playoffs?

It was very disappointing, because we had such a good team last year and we thought we would make a run in the playoffs. This year’s team has to learn to overcome adversity and do the little things right on the field.

Jimmy Graham (TE for the Seattle Seahawks), because of his physicality, and his determination to dominate whoever is in front of him.

The recruiting process has been good. Many coaches and colleges have shown  interest in me and they are going to be watching me closely this year.

LAFM: What advice would you give to your teammates about the process?

You have to stay patient, , focused, and work hard because your time will come.

LAFM:  Who are some players on Christian Life’s team do you think will have a breakout season and why?

Jacob Kibodi, Jonathan Thomas, Louis Briggs, Jonathan Azuoru, Chase Williams, and Shykim Seymore are all playmakers and have been working hard all summer.

LAFM:  What is something interesting that people don’t know about you?

LAFM: What was your favorite game to play while at Christian Life Academy and why?

My favorite game was during my freshman year when we played Albany for homecoming. The atmosphere was amazing and we had a huge crowd of supporters.

LAFM: Is there anybody in your family that has played football at any of the major level (high school, college, or NFL)?

LAFM: Who are some people in your life that you thank for putting you in the position that you are at today?

I thank my family, friends, and coaches for pushing me and motivating me everyday to give my best effort.

What separates me from other tight ends, in the state, is my physicality because I love contact.