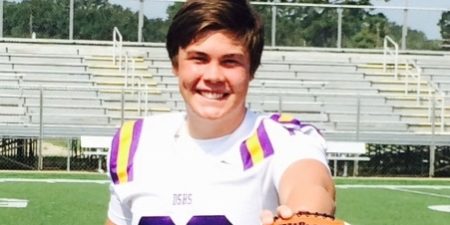 Denham Springs TE Dauton Sibley is your prototypical tight end. He is a big guy who is 6’4 260 and can probably play on the offensive line but he is quick and fast enough to go down the field and catch passes. Dauton can develop into a really good college football player and can be one of the key factors for Denham Springs to improve from last season. “Dauton’s a tight end but he’s going to grow into a big kid,” Lee Brecheen said. “He is a blocking tight end who has really good hands. Dauton could end up being a guard or tackle in college.” Get to know Dauton more as he talks about Denham Springs High School, his influences, and this upcoming football season in today’s recruiting interview! 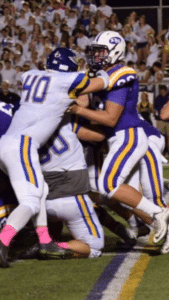 LAFM: Do you have any offers from colleges? If so, where?

Slow. I’m trying to get my name out there.

LAFM: What advice would you tell any other players on the team about the process?

Get noticed, attend camps, and be productive.

LAFM: As a tight end, what are your strengths and weaknesses?

I like to block and I am good at blocking and I have good hands and can catch the ball really well. My weakness is probably my sprinting speed.

LAFM: What is the best part about playing tight end?

I love being at the end of the line and setting edges and I love to go out for passes and to get just enough yards to get the first down or touchdown.

LAFM: Do you play any other position?

I play h-back/fullback, defensive end, and filling this year at offensive tackle.

LAFM: Last year, the team lost against Destrehan last year in the playoffs. How disappointing was the early postseason loss last year?

It was very disappointing. We worked so hard during the first half of the game and we just fell apart during the second half.

LAFM: Denham Springs plays in a tough district with state champion Zachary, Scotlandville, Central, etc. What does the team need to do this year to contend for a district championship and a high playoff berth?

Stick together and love each 0ther as a team. We are very close this year and if we can tag along and carry each other then we will be great. Work as a team.

LAFM: What was your best game at Denham Springs High School and why?

My best game in my mind might have been our homecoming game against Walker last year. I felt that I completed my assignment on every play. I thought I was plowing people over and my running backs kept running up my butt and getting good yardage.

LAFM: Who was the best player you played against last year?

Watching Lindsey Scott play against us was quite the show.  Just how he could move around the field was pretty interesting.

LAFM: Which team are you looking to play the most on the schedule?

All teams I am excited for but if I had to pick one it would be Live Oak so we can get back at them from last year’s loss.

LAFM: Which player on Denham Spring’s team do you expect to have a breakout year and why?

I have two and both are great friends of mine. On offense, Tyler Hoover, he’s a quick, fast receiver that has a great work ethic and runs some really good routes. He can catch the football lights out. On defense, Justin Gafney, he’s a big, strong, dude and that’s his time to take over the defense.

LAFM: Which player do you model yourself (college or NFL)?

When Jeremy Shockey played, I modeled him and now it’s Rob Gronkowski. I like both because of  how they played but Gronkowski has a big personality and I believe I have a big fun personality like he does and I’m hoping to play like one of them some day.

LAFM: Is there anybody in the family that has played high school, college, or pro? If so, who are they and where did they play?

LAFM: If you are talking to colleges and they ask you what separates you from all the other tight ends, what would you say?

My hustle and my work ethic. I work my butt off and I’m ready to do whatever it takes for my team.